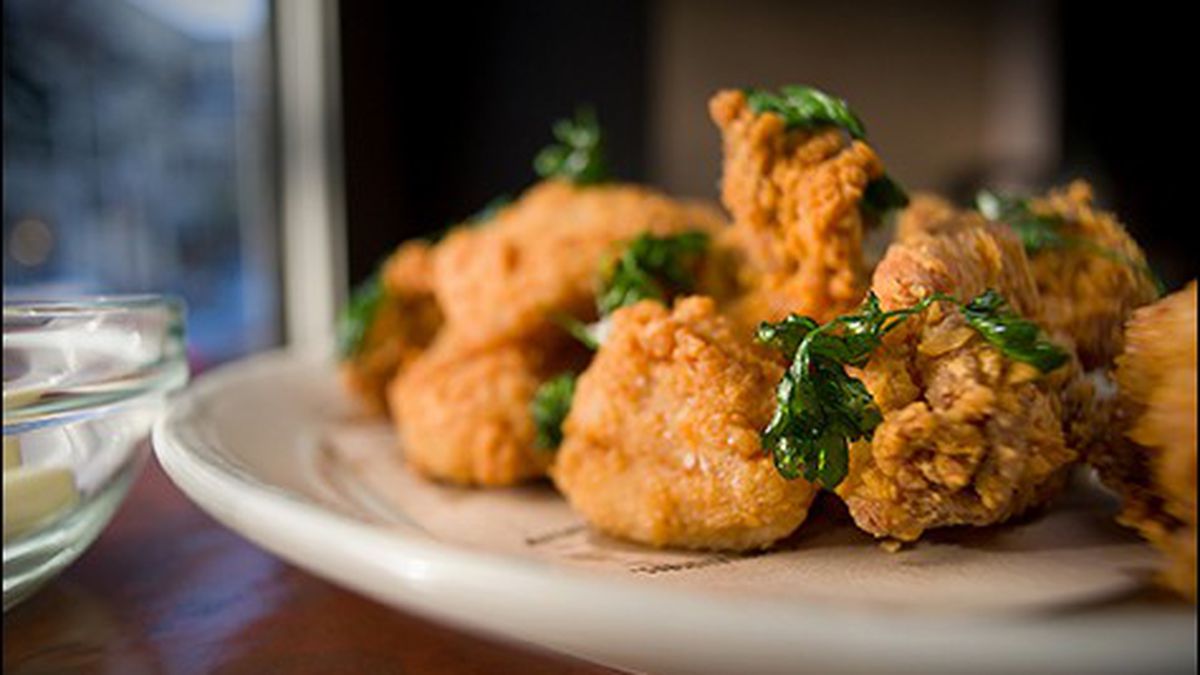 When you write about restaurants for a living, you try your best to maintain a certain detachment from the industry. That said, there are worse things you could accuse me of being than a James Syhabout fanboy. I readily cite Commis — the Oakland-raised chef’s flagship, Michelin-starred temple of gastronomy — as one of my favorite restaurants. And Hawker Fare, Syhabout’s casual rice-bowl spot, is one of the places I always bring out-of-town guests to show them what’s great about Oakland’s dining scene.

So when Syhabout announced that he’d be opening a new “eating house” in Rockridge called Box and Bells, I was psyched. The skeptic in me took note of the restaurant’s funny name, which was inspired by Syhabout’s vision of the place as a loud tavern — “like you put a bell in a box and shook it up.” And the decor is a little odd, especially the discombobulating front section, which combines porn-worthy dim red lighting with festive hanging planters that look like they could’ve come from some Italian villa. But, ultimately, the restaurant lives up to the hype: The food is so good that everything else fades to the background.

Syhabout’s idea was to create a place that serves the kind of food his chefs at Commis eat during their nightly staff meals — the kind of super-rich, indulgent, meat-centric food that chefs cook for each other, and that they like to eat on their days off. He tapped one of his longtime chefs at Commis, Benjamin Coe, to head up the kitchen, but many of the restaurant’s staples are Syhabout’s own recipes, conceived over the course of several years’ worth of staff meals. And, though Syhabout has a reputation for being open to modern cooking techniques (to powders and water baths and such), he said he wanted Box and Bells to be a return to cooking “like a farmer’s wife.”

Speaking of which, someone ought to give Syhabout a medal for his fried chicken with raw oyster mayonnaise, which earned a spot on the short list of best fried-chicken dishes I’ve ever eaten. The chicken was a riff on Japanese karaage — brined and lightly battered thigh meat, deep-fried to such a pinnacle of tenderness that it rendered me speechless. But the real star was the mayonnaise, whose inclusion in the dish, like so many great discoveries, was a matter of happy coincidence. Syhabout had made a batch of the stuff (a traditional egg-and-oil emulsion, with raw oysters blended in) for another dish at Commis and thought, why not use the leftovers as a dipping sauce for the fried chicken that he’d planned for the next staff meal? The results were pure magic: The mayonnaise provided a decadently rich foil to the chicken, an echo of the sea in every bite. Something about the combination made us sit up and pay attention. We barely glanced at the other dishes on the table until every last morsel was gone.

On to the main course: an eight-ounce petit filet with a crayfish béarnaise, which, perhaps more than any other dish, showcased Syhabout’s back-to-the-basics cooking philosophy. The steak was perfect — so ridiculously tender I swore it could only have been cooked sous vide. But no: After a quick sear, the cooks roast the steaks “slow and low,” flipping the meat constantly, using dry heat to achieve the kind of precise, even cooking that you get with a water bath. The tangy béarnaise sauce (like an herbaceous hollandaise), infused with an intense crayfish stock reduction for an extra jolt of umami, added all the richness you could ask for to an extraordinarily lean cut of beef. A pile of roasted chanterelle mushrooms and several flecks of crunchy sea salt on the surface of the meat completed the dish so well, I still catch myself daydreaming about it a couple weeks later.

But no, there were other dishes to be eaten: platters of butter-soaked, drippings-drenched food; small plates and not-so-small plates; richness on top of richness. Who was I to complain? The food was soul-warming in a kind of way you don’t often find at higher-end restaurants, and despite Syhabout’s determination not to serve overly cerebral dishes, nearly every plate had some component that piqued my curiosity.

There was a stout little burger, served on a pretzel bun, that had a chewy, intensely “beefy” coarse-ground patty and — topped only with caramelized onions and sweet melted Gruyère — the flavor profile of French onion soup. A plate of sea scallops was most notable for its accompaniments: crispy cornmeal-based spaetzle and a pool of zesty, fried-caper-infused browned butter. Deviled eggs came topped with fried shallots so crunchy and Funyun-like I swore they’d been dehydrated — but again, old-fashioned cooking took the day: The shallots had simply been sliced super-thin and fried at a low temperature, until all their moisture cooked off.

Even the cooked vegetables, so often relegated to the status of throwaways meant to appease the health-conscious, were incredibly rich. My favorite was the roasted celery root, which came in a pool of fatty, rosemary-scented beef and chicken drippings.

If Box and Bells has a flaw, it’s this: Those of us who need to be mindful of our arteries (perhaps yours have hardened just reading this review) will have a difficult time justifying more than an occasional visit. Hell, even the salad we ordered — a bowl of Little Gem lettuces — was drenched in blue cheese dressing and topped with bacon lardons that were literally an inch thick.

Syhabout explained that staff meals tend to be so rich and fat-laden because, for most chefs and line cooks, that’s the only meal they’ll eat the whole day. My advice? Have a light lunch. Go for a run. Because when the server puts the menu in front of you, that’s not going to be the time you’ll want to exercise restraint.