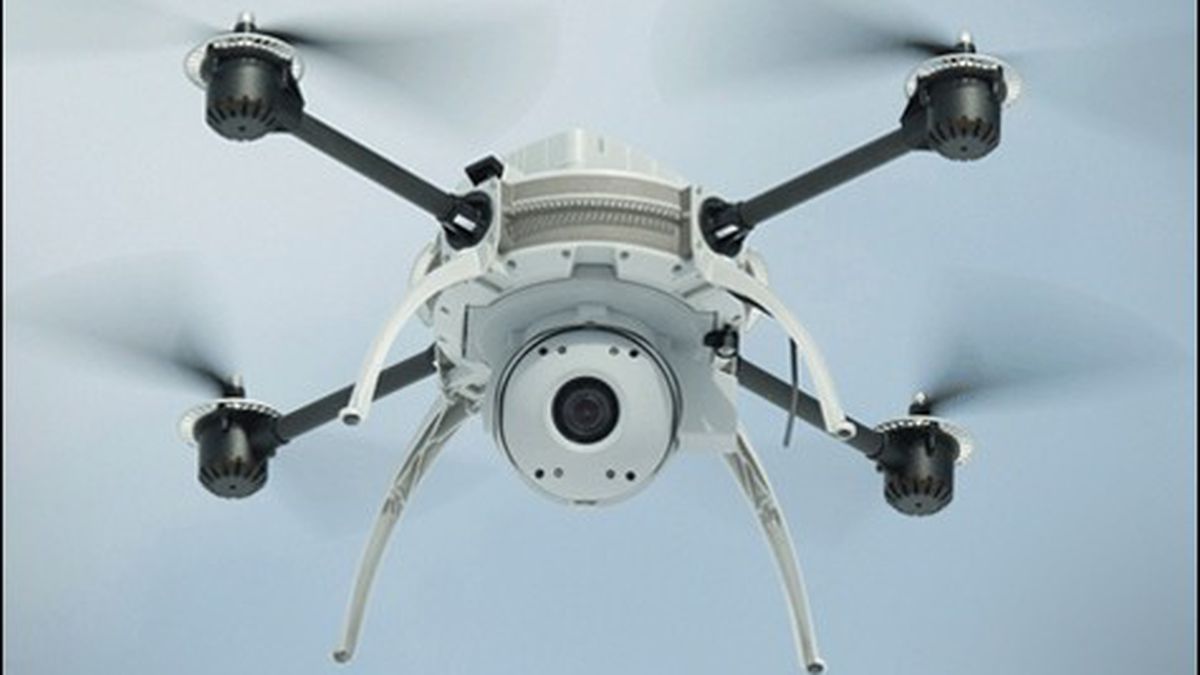 Drone Surveillance May Be Unconstitutional

Some legal experts contend that a 2012 US Supreme Court ruling could make the use of drones illegal for certain types of police work.

Alameda County Sheriff Gregory Ahern has publicly stated that the drones he wants to buy and deploy in the East Bay would be used primarily for emergency and disaster response. However, internal sheriff’s office documents show that Ahern’s staffers also envision using drones for traditional police work, including “intelligence gathering” and “crowd control” during large demonstrations. And some legal experts contend that if the sheriff’s office follows through on its plan to use drones for such policing activity, it could run afoul of a 2012 US Supreme Court decision on warrantless surveillance.

Ahern set off a media firestorm this fall when he attempted to gain approval from the Alameda County Board of Supervisors to purchase a drone using $31,646 in grant money from the California Emergency Management Agency. Ahern then withdrew his request following loud complaints of civil liberties violations and a lack of government transparency. The American Civil Liberties Union of Northern California and the Electronic Frontier Foundation protested the absence of public debate over the use of unmanned aerial vehicles in Alameda County, as well as the lack of guidelines governing drone usage. Ahern, however, is expected to renew his drone request this month, and if Alameda County does acquire a drone, it would be a first for California, which has long been an innovator in law enforcement tactics, with notable examples including SWAT teams (pioneered in Delano and Los Angeles) and anti-gang tactics such as civil injunctions.

Since Congress passed legislation in February ordering the Federal Aviation Administration to fast-track the approval of drones for use by law enforcement agencies, police and sheriff’s departments across the country have been scrambling to purchase the smaller, unarmed cousins of the Predator and Reaper drones that have become an integral part of the Obama administration’s ongoing war against terrorism.

However, some legal experts say American law enforcement’s use of drones raises serious questions about privacy, surveillance, and warrantless searches that touch on core liberties enshrined in the Constitution. Although there are no legal opinions to date that specifically address how drones can be used within the United States, Babak Siavoshy, a teaching fellow at the Samuelson Law, Technology and Public Policy Clinic at the UC Berkeley School of Law, and John Villasenor, a professor of electrical engineering at UCLA and fellow at The Brookings Institution, both contend that a unanimous US Supreme Court decision in January 2012 concerning warrantless surveillance may have implications for the use of drones for police work.

In that opinion, United States v. Antoine Jones, the high court threw out the drug trafficking conviction of a Washington, DC nightclub owner because police and FBI agents tracked his location for a month via a GPS device without a warrant. The court ruled that law enforcement had violated Jones’ Fourth Amendment rights. Jones is currently facing a retrial.

Like GPS devices, small drones can be deployed to track people for long periods of time without their knowledge. As a result, if the Alameda County Sheriff’s Office were to use them for surveillance that is similar to what was outlawed in the Jones decision, courts may decide to intervene and institute judicial oversight and regulation — since such rules have not been set up by federal, state, or local authorities. “‘Trust us’ isn’t a good argument under constitutional law,” Siavoshy said, in reference to the Fourth Amendment.

Siavoshy, who co-wrote the respondent’s brief in Jones, noted the explicit concerns raised both by conservative Justice Samuel Alito and Obama appointee Sonia Sotomayor in their concurring opinions in the case, both of which addressed how warrantless GPS monitoring clashed with the Fourth Amendment’s protections against searches and seizures. Although concurring opinions are not binding law, Alito’s opinion noted that monitoring technology took a great deal of resources before the advent of drones, and was downright inconceivable when the Bill of Rights was drafted. “Traditional surveillance for any extended period of time was difficult and costly and therefore rarely undertaken,” Alito noted. “The surveillance at issue in this case — constant monitoring of the location of a vehicle for four weeks — would have required a large team of agents, multiple vehicles, and perhaps aerial assistance. Only an investigation of unusual importance could have justified such an expenditure of law enforcement resources. Devices like the one used in the present case, however, make long-term monitoring relatively easy and cheap.”

Sotomayor’s opinion also pointed out changing standards of privacy due to shifts in technology. The former prosecutor also wrote of the need for appropriate safeguards (such as warrants) for searches and seizures. “I would also consider the appropriateness of entrusting to the Executive, in the absence of any oversight from a coordinate branch, a tool so amenable to misuse, especially in light of the Fourth Amendment’s goal to curb arbitrary exercises of police power to and prevent ‘a too permeating police surveillance.'”

The first documented incident of a drone being used to make an arrest in the United States occurred in North Dakota in June 2011, when local police received assistance from an unarmed Predator B drone that belonged to US Customs and Border Protection. The FBI and the DEA have also reportedly used drones for domestic investigations. Roughly a dozen local police departments and sheriff’s agencies have used or are using drones, including the Seattle Police Department.

According to Ahern, Alameda County Sheriff’s personnel first tested a drone in fall 2011, and gave a public demonstration of the machine’s usefulness for emergency responses during the Urban Shield SWAT competition in late October.

In an interview with the San Francisco Chronicle, Ahern denied that he had tried to evade public scrutiny in buying the drone and said it would not be used for blanket surveillance. “This device is used for mission-specific incidents,” he said. “We strive to gain the public’s trust in everything we do, and I would never do anything of this nature that would destroy the public’s trust beyond repair.”

Sheriff Ahern and his staff also have repeatedly stated that the capabilities of a drone are not that different from those of a helicopter or survey plane. But Villasenor said drones are markedly different from helicopters and surveillance aircraft because they are cheaper to purchase and maintain, and because they require less fuel and manpower to operate. Drones also can be launched from far more locations than traditional aircraft — and can be kept aloft for long periods of time.

Internal sheriff’s office documents obtained by the Electronic Frontier Foundation (EFF) also indicate that sheriff’s personnel have different plans for the drones than what Ahern has publicly described. A July 20, 2012 memo from sheriff’s Captain Tom Madigan elucidated potential uses for drones in emergency response, explosives disposal, search and rescue, and a range of policing uses that raise civil liberties concerns.

Drone-mounted cameras also can be equipped with Forward-Looking Infrared (FLIR) technology that reads heat signatures through buildings, and intelligent video programs, such as facial recognition software that acts as a sort of license-plate reader for people. All three bids from drone manufacturers submitted to the Alameda County Sheriff’s Office included FLIR camera packages for the drones.

FLIR technology also raises Fourth Amendment issues, Siavoshy said. The US Supreme Court case of Kyllo v. United States ruled that the use of a heat-detection device by law enforcement to find an indoor marijuana grow required a warrant. Thus, if the sheriff’s office wanted to use the drones’ FLIR capabilities, it would need some form of judicial approval beforehand. “They’d need a warrant before using this one on a home,” said Siavoshy.

The EFF and ACLU want a public dialogue about the use of drones by local law enforcement and seek to establish a set of guidelines that would protect individual privacy and restrict how drones could be used during domestic policing. In a December 3 letter to the Alameda County Board of Supervisors, ACLU attorney Linda Lye outlined the case for public discourse and deliberation before making the decision to approve a drone purchase.

“Because drones pose unique dangers for privacy invasions and are subject to potential abuse, any decision by the County to purchase a drone should be made through an open and transparent process with ample opportunity for public participation and comment,” the letter read.

If the Alameda County Board of Supervisors approves Sheriff Ahern’s request to spend state grant money on a drone, the bids solicited by the sheriff’s office make it clear that county taxpayers will have to foot the bill for it. Sheriff’s Captain Madigan stated in his July 20 memo that the cost of the requested drone model, Dragon Fly UAS with live video downlink and FLIR, is $30,000. But documents released last month by the ACLU of Northern California show that the Alameda County Sheriff’s Office already received bids for drones from Aeryon, Lockheed Martin, and ING. Aeryon offered two separate deals with different parts and equipment at $67,500 and $107,500; Lockheed Martin gave a quote of $49,981 for its QR425 QuadRotor model; and Canadian firm ING provided options that cost between $90,495 and $135,995. Any of those choices, in other words, could require the sheriff’s office to use county funds to make up the difference.

The Sheriff’s Office also could spend the state grant money that it plans to use for a drone on other, less controversial policing, needs — such as buying additional equipment for the county crime lab or funding additional personnel who might be able to help its counterparts in Oakland with a staggering backload of ballistics and forensics evidence.

But California law enforcement agencies appear to be very eager to spend taxpayer funds on drones rather than traditional policing. Documents obtained by the EFF in collaboration with the open records website MuckRock.com reveal that the San Francisco Police Department’s $100,000 request to purchase a Remotely Piloted Vehicle was rejected by the local Urban Area Security Initiative, a regional Homeland Security administrative agency. In San Diego, where the Border Patrol already operates several Predator B drones for reconnaissance along the US-Mexico border, county Sheriff William Gore announced his intention last month to purchase a drone.

The California legislature’s new Democratic supermajority, however, could create new regulations for drones in 2013. State Senator Alex Padilla from the San Fernando Valley introduced Senate Bill 15 on December 3, which would attempt to establish rules for drone usage in California.

Padilla’s bill seeks to bring legislators into a discourse about the “new challenges to the privacy and due process rights of Californians” posed by drones. The most specific provision in SB15 recommends that data, including photographs, video, and recordings of people in public and private settings, should be kept to a minimum and retained in compliance with existing laws governing privacy.