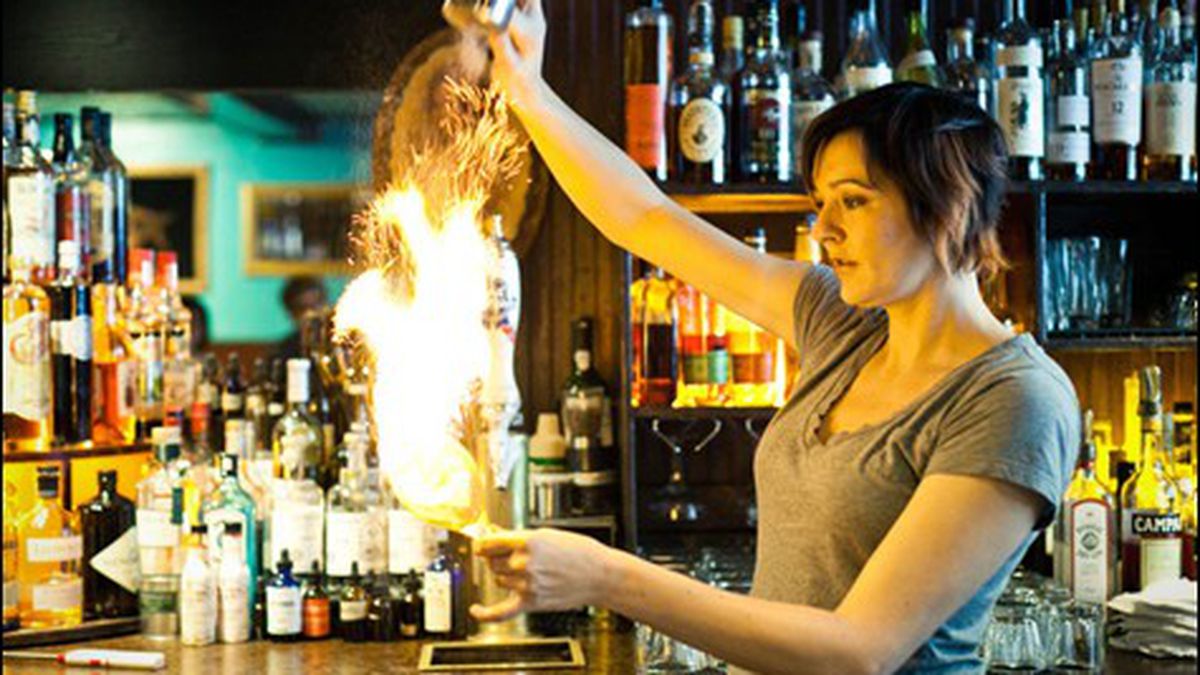 Drink and Get Merry

It’s hard arguing with eggnog: The holiday classic is, after all, a perfect storm of everything awesome in life — animal fat, brown liquor, and copious amounts of sugar, often served in a portion-control-defying punchbowl and in a highly merry context. But it’s just that — a classic, which means it’s been served at every holiday function since the dawn of time. Between it, mulled wine, and spiked cider, you might there’s nothing else out there when it comes to gut-warming, cheer-inducing adult beverages. You would be very, very wrong.

Ask Alex Conte, of Rockridge’s Hudson: “There’s nothing that says ‘holidays’ like one of those thick, stick-to-your-insides drinks — but it doesn’t need to be that.” He prefers stirred, spirits- and spice-driven drinks, like his bar’s My Dear Watson (bourbon, egg white, lemon, orange, maple syrup, tobacco tincture, and bitters, served up with a cherry), or the as-yet-unnamed special cocktail he made on a recent visit (allspice dram, the Italian digestif amaro, rum, and rye, with an orange twist).

There are many ways to make festive and wintry drinks without resorting to refrigerated cartons or packaged spice mixes. According to Brian McMillan at Sidebar, winter is a particularly good time to experiment with heavier, deeper liquors like whiskeys and dark rums, which are often served warm — unlike, say, vodka or gin, which can be refreshing in the summertime but a little unsubstantial in cooler weather. Look at it this way: Just as you swap the simple, light food of summer for heavier, warmer fare when winter comes, so should you recalibrate your liquor cabinet. Think spices (like ginger and cinnamon) over summer citrus (like lemon and lime); bitters over juice; festive-looking ambers and browns over clear and pastel-colored drinks; and warm or room-temperature beverages over cold ones. “I think most of us think of brown spirits this time of year,” said Jessica Maria of Albany’s Hotsy Totsy Club. “I mean, a glass of whiskey by a fire — that’s what I personally want to drink. And there are also so many vegetables and spices that are available this time of year.”

In terms of ingredients the average person is likely to have on hand, you can’t go wrong with Peppermint Schnapps, crème de cacao, hard cider, amaretto, ginger beer, or orange-flavored liqueurs like Triple Sec and Grand Marnier. Maria also recommends infusing vermouth with cinnamon by browning four or five sticks in a skillet, submerging them in sweet vermouth overnight, and then straining; refrigerated, the infused vermouth can keep for up to a month, and can be used everywhere you’d use regular vermouth in cocktails. “It’s an easy way to make standard cocktails at home have a holiday edge to them,” she said.

On the schmancier and rarer end of the spectrum, you may see whole eggs; spice-flavored tinctures, syrups, and shrubs (vinegar- and fruit-based mixers); and creamy or flaming drinks popping up increasingly in local bars this season. According to owner Alexeis Filipello, Bar Dogwood’s recently released winter cocktail menu contains drinks including pine liqueur, alcoholic whipped cream, and hot chocolate “laced with tons of booze,” plus a full menu of hot toddies and a winter-specific take on the Manhattan, which includes an egg-white foam and house-made lemon and cherry whiskeys. Maria, meanwhile, just introduced what she’s calling a Hot Totsy (Spanish brandy, nutmeg, honey, lemon, and overproof rum, which is set on fire before adding the other ingredients). She’s also playing around with ingredients like jujube, a winter fruit. For his part, McMillan favors applejack (an apple-flavored brandy), yellow chartreuse (a pungent, herbal French liqueur), and various bitters, while Conte likes playing with “autumnal, earth-driven” flavors like allspice and tobacco — “basically, using a lot of what we consider to be Christmas spices, but staying away from those fluffy white drinks.”

Not that there’s anything wrong with fluffy and white, he was quick to clarify. But as the cocktail scene in the East Bay and beyond has matured considerably in recent years, the creativity level has been ratcheted up year-round, and the capacity for experimentation is higher. That’s why McMillan said he tends to steer away from special “seasonal” drinks altogether — for someone who takes mixology seriously, all drinks are special, and “holiday” is a bit of a gimmick. He is, however, a big fan of the flip — a sort of proto-eggnog made from a couple ounces of dark spirits, simple syrup, a whole egg, and a dusting of nutmeg on top. “It’s amazing how good four ingredients can taste,” he said, and he’s right. It’s eggnog, almost. But better.

When I Was a Rent Boy