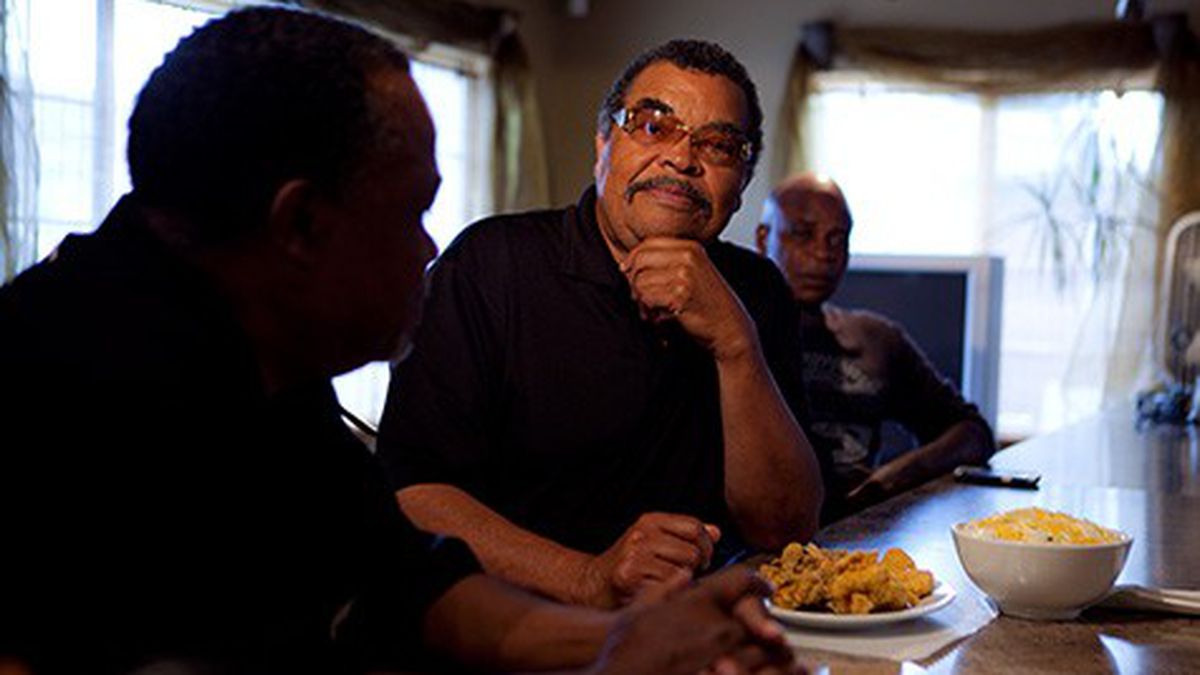 Inside the dimly lit interior of Dorsey’s Locker on a recent Monday, roughly two dozen people sat scattered around a bullpen bar. The house band took its place on the narrow landing that serves as a stage, its edges delineated by a bronze bannister. Harry Gold, a 24-year-old ginger with glasses, growled through Keb Mo’s “Love Blues.”

It was a typical evening at DeJeana Burkes’ weekly blues jam, known as Jammin with DeJeana and Bluzfusion. In many ways, the evolution of Burkes’ event is similar to the way musicians have historically found a foothold at Dorsey’s.

But after more than a half century, Bushrod’s neighborhood soul food restaurant, bar, and venue will close in the coming weeks. While co-owner Don Dorsey said there’s no firm date set, his cousin and co-owner, Joe Dorsey, said Dorsey’s could shutter by late June or early July.

Founded by Henry and Wilma Dorsey in 1941 under the name Mother’s Café, the restaurant was what Joe Dorsey called a “hole in the wall,” situated at 7th and Magnolia streets, where Don Dorsey’s aunt and uncle served Texas-style soul food to the mostly Black workers who’d arrived in the Bay Area from the south. West Oakland, often called the Harlem of the West Coast, boomed as a hub for Black music.

“7th Street used to be probably like Broadway in New York was back in the day,” Joe Dorsey said. “They had everything and anything down there — prostitution, liquor, after-hours clubs, gambling. It was a whole little city in itself.”

The naval supply center and Army base provided jobs, and Joe Dorsey said the 7th Street corridor was a weekend destination for Black workers. Blues, jazz, and gospel venues drew national names to the strip, where today bronze placards mark the Oakland Blues Walk of Fame.

Jesse Brown, a West Oakland native and singer, said that he remembers how the district swiftly disappeared. “A lot of that was torn down with the building of the Post Office and the BART,” he recalled. “A lot of properties were taken by eminent domain and the people who lived on the south side of 7th Street were transplanted … so those clubs were forfeited.”

“It stopped the music in its tracks,” said Freddie Hughes, an Oakland Blues Walk of Fame inductee.

By 1956, Dorsey’s had moved to its current North Oakland location under the name Dorsey’s Bosn Locker, an homage to Henry Dorsey’s service in the Navy. The venue was spared from West Oakland’s sea change, which Ronnie Stewart, founder of the Bay Area Blues Society, called a “cultural genocide.”

Some clubs endured, including Esther’s Orbit Room, which closed in 2011. Eli’s Mile High Club exists today, but it pivoted away from blues in the early 2000s, according to Patty Hammond.

“The blues at Eli’s was world famous,” said Hammond, bassist in Kickin’ the Mule. “Musicians like James Brown, Etta James, or Sugar Pie DeSanto, who were on tour, would come to Eli’s after playing their own gigs … [to] talk music with the players.”

Hammond added, “There really aren’t that many places anymore. [Dorsey’s] is one of the last bastions of keeping the tradition of the blues jam alive. It’s vital. It’s really vital.”

When Dorsey’s started hosting live music in the barroom around the late Seventies, Joe Dorsey said, “We was basically just experimenting, because a lot of these bands wanted to get exposure. … They were just begging for a chance to draw crowds and that’s what happened.”

Although Dorsey’s has never been a place for musicians to make serious money, Joe Dorsey said that it fosters a mutually beneficial exchange between aspirant players and a bar looking to distinguish itself. “You only could hear live music before in one of the big places,” Joe Dorsey said. “So, we started having music here in this little small place.”

When Burkes first pitched her blues jam, Joe Dorsey warned her that there would be little money coming in from the typically sparse Monday night crowd. Now, he said, “It’s improved a lot. There’s no comparison to when it first started.”

Burkes, matriarch of the Monday blues jam, emphasized that her weekly event “gives musicians an opportunity to grow.”

Bobby Cochran, the drummer in the Elvin Bishop Band, which this year won best blues band, album, and song at the 36th annual Blues Music Awards in Memphis, Tennessee, said of Dorsey’s, “It’s the place to be in Oakland.”