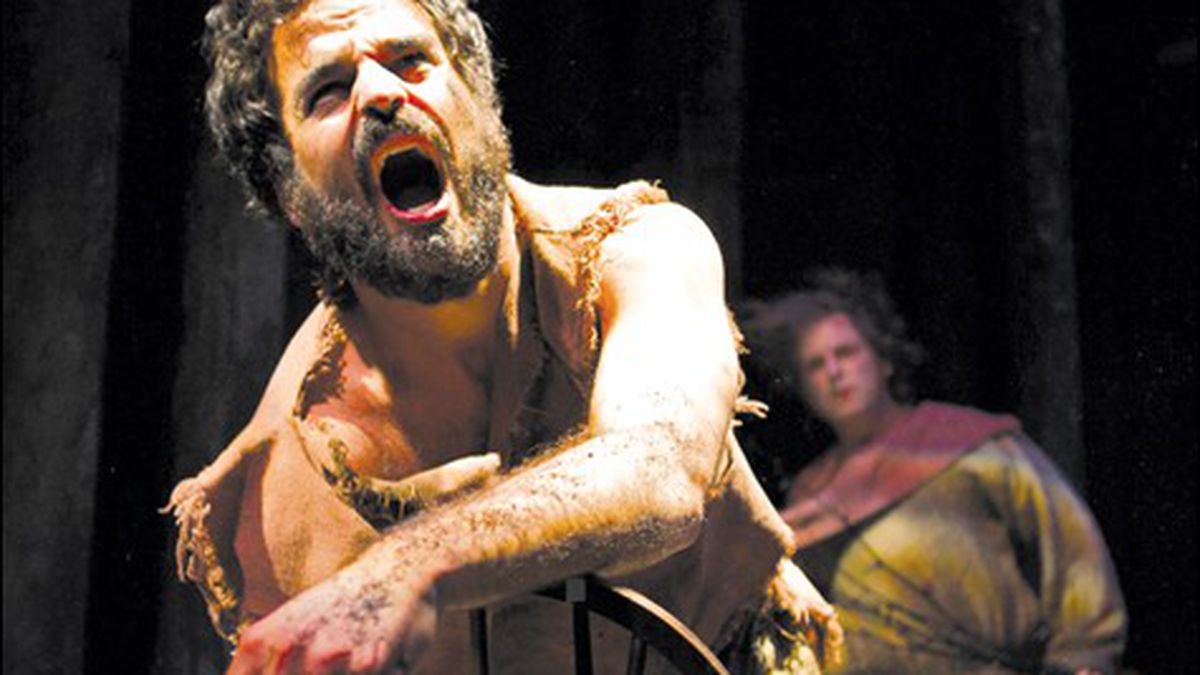 Braveheart has nothing on Beardo, the swarthy hero of Shotgun Players‘ new, bizarre rock musical about a Russian monk who infiltrates the palace of Emporer Nicholas II. The real Beardo was Rasputin, a mystic and self-proclaimed “mad monk” who went by various other monikers (faith healer, pilgrim, “strannik”). In this rendition, he’s played by Ashkon Davaran, a self-made YouTube sensation most famous for his paeans to the San Francisco Giants. Davaran actually makes the perfect Beardo: Tall, bushy, rumbly-voiced, relentlessly exhibitionistic, and incorrigibly flirtatious. His dick has the same phenomenal healing powers as a wizard’s scepter (as he’ll argue in the first act, it deserves its own Wikipedia page). Perhaps it’s no accident that his big claim to fame is a viral video based on the Journey song “Don’t Stop Believin’.”

Casting an Internet star shows daring on the part of artistic director Patrick Dooley, who helmed this dazzling production. Beardo starts off with a tableau image of Russian peasantry. The title character lies comatose in a birch-tree forest — carefully designed by Lisa Clark — his hand stuck deep in a hole. He is discovered by a country man and woman (Josh Pollock and Sarah Mitchell) who resuscitate him. (“Eh mister, you all right there? You been out there a long time, with your hand in that hole,” the man observes.) Draped in heavy peasant garb, the man and woman welcome Beardo into their dismal world. The woman eyes him ferociously as she peels a potato. She says that Beardo reminds her of an old cat she had — “a shit cat,” her husband interjects.

And lo and behold, that’s an apt metaphor. Priapic powers aside, Beardo’s real talent is interloping. He stakes claim on a parcel of land by sticking his hand in a hole (it’s actually a “lack” of the land, he says), inserts himself between the farmer and wife, and then inexplicably slips into the tsar’s palace, because, he says, “the door was open.” Henceforth, Beardo is known as the “outsider” who got “in.” It’s as close as the play comes to having a message, albeit an abstract one.

But it’s good enough to sustain two acts’ worth of musical numbers and ribaldry. And when you think of it, the storyline behind Beardo — and his real historical antecedent, for that matter — is one of the classic templates of comedy. An intruder finds his way into the rarefied world of the upper-class, where he’s perceived, alternately, as a divine presence, and a threat to the social order. Dooley and playwright Jason Craig took pains to make the class divisions seem as pronounced as possible. Beardo is a feral creature, with a huge bush of a beard and mud caked up and down his legs. He wears a charcoal cloak that shimmies, “skirt-like,” when he walks. And he’s packing.

The aristocrats, in contrast, wear red tights and high, pink eye shadow. They occupy a weirdly sterile and yet intensely carnal world. The women are frigid; the men are fey; the dinners consist of fat rump roast and carrot spears. To masticate is to assert dominance. A dignitary named Yusapoof (Dave Garrett) describes it best: “On the plate is my meat, and on my face is my mouth. And I destroy the meat with my chewing.” The line elicited cheers on opening night.

Into that odd upper-crust world waltzes Beardo, with the same aplomb as one of the Salahis crashing a White House party. Hey man — the door was open. He seduces the tsarista (fiercely played by Anna Ishida), humbles the tsar, cures their delicate child boy of hemophilia (the child is played by a lumpy puppet with a human head), and ravishes pretty much every blue-blooded thing that has a vagina and moves.

Yes, that’s a coarse description, and it befits a coarse play. Beardo might be the edgiest production ever mounted by Shotgun Players. It’s richly salacious and crudely violent, with a self-flagellation scene in the first act that only serves as a preview to coming attractions. Beardo has no compunction about bedding the tsarista or urging her husband to go out and get some balls. He gamely bats eyes at the audience, describing his wizard outfit and the dust that blossoms out of it, “when I pat my chest rigorously.” Ooh la la.

And even with all that taken in consideration, there’s a moral to the story. It bleeds through at the end of the first act, when an entire peasant choir emerges to sing about war and class oppression. The music, composed by Dave Malloy, is densely lyrical and harmonically jagged. And it also serves a purpose. Orchestral music — played by a live five-piece band — undergirds all the peasant scenes, whereas canned classical music accompanies the palace dinner. Indeed, class divisions were stark, and nearly inviolable in tsarist Russia. Only a character as powerful as Beardo could disrupt them.

Update: The original version of this article had Beardo referring to a “lap of land.” The correct line is “lack of land.”