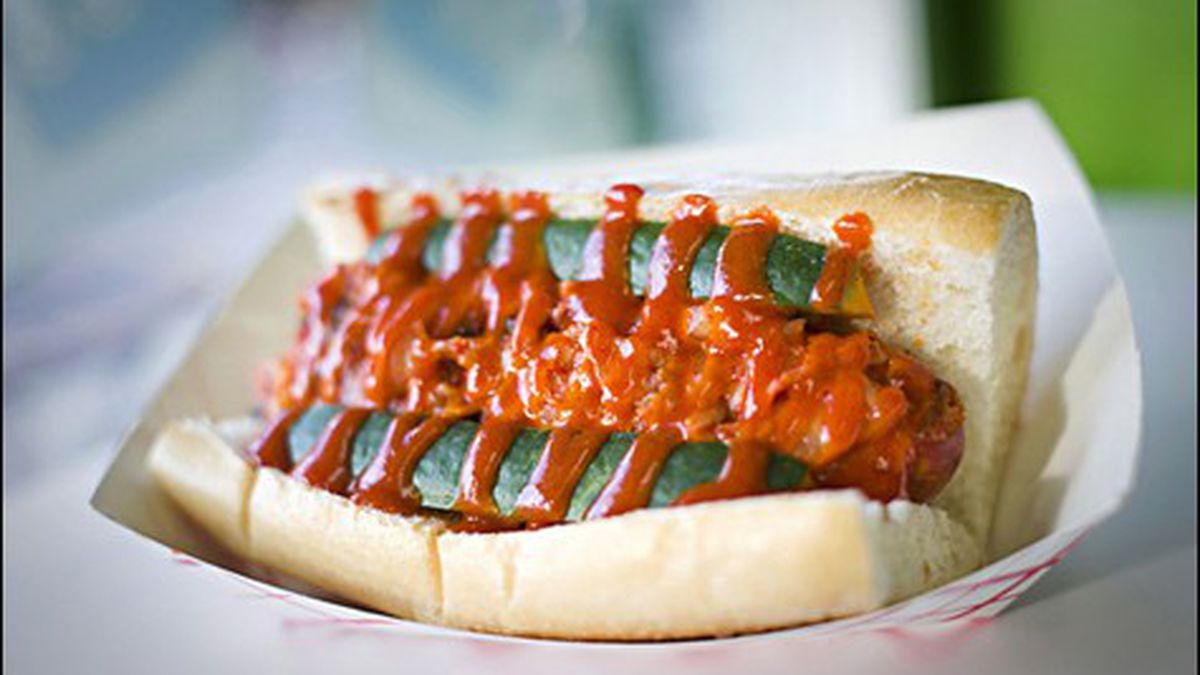 The Pampered Pup, a 65-year-old hot dog shop in Alameda, looks like the type of place writers love to exalt, mythologize, and, eventually, eulogize. It’s a retro jamboree: kitsch signage, vinyl stools, gumball machine, and a letter-board menu with prices like $3.54 and $4.27. This is where traditionalists go for their classic steamed dog in a bleached white bun. The shop may be a little dingy and time-worn, but it still evokes images of bobby-soxers courting over a foot-long and a Coke.

Just a few short blocks (and a few hundred style miles) from the Pup, Doggy-Style Hot Dogs opened a couple of months ago. Doggy-Style is part of the new guard of hot dog shops, like the Bourdain-loved Japa Dog in Vancouver or Show Dogs in San Francisco. These places gussy up their lowbrow entrée with quality bread, haute toppings like fig chutney and arugula, and meat that transcends “lips and assholes.” Burgers may have graduated years ago from fancy school, but the age of the boutique hot dog is well upon us.

Outwardly, Doggy-Style is charmless and crass. The walls are neon green and blue, the lights are harsh and bright, and the tiny customer space is all function without form. A few tall, awkward chairs beckon to no one, belied by the store’s slogan: “A place to eat your dog in style.” A jarring contrast with the sleepy downtown vibe, Doggy-Style looks like a lab where they invent new types of Mountain Dew (“Razz-berry Slamboat!”).

Approaching Doggy-Style for the first time, I realized I bore some festering prejudice toward aggressive, hyper-modern restaurant marketing. At the risk of sounding like Andy Rooney (RIP), I’m tired of food that threatens to “blow my mind” — logos in edgy graffiti font, and loud puns fit for a monster-truck rally: Sunday Sunday Sunday, we’re doing it Doggy Style!

Once I tried the hot dogs, I grew more generous in spirit. I wanted to be put off by the flash, to disdain the over-the-top menu, but Doggy-Style’s products transcend gimmickry. They start with a stable of seven hot dog and sausage varieties, including linguica, calabrese, and Polish sausage. Using these options as a base, sunk low in a plush, barely-grilled sesame roll, you can then choose from eight signature topping combinations, with ingredients like seaweed, Sriracha, and blue corn chips. These smart, well-apportioned combos stem from months of pre-dawn tinkering by co-owner and chef Mike Pang. “Mike was coming into the store at 5 a.m., months before we were open, trying to nail down what ingredients worked best together,” said co-owner (and Mike’s uncle) Milton Pang.

For my money, Doggy-Style’s best in show (allow me this one hot dog pun) is the Kimchi Pyro, a razzle-dazzle firebrand with an Asian flavor profile. A scorching beef/pork hot link is bookended by two seedless pickle spears, topped with a dense tangle of kimchi and spicy mayo. I was first assaulted by the wash of tart kimchi, then chased by a searing burn, and finally relieved by the pickles’ cool crunch. The taste was surprisingly complex and well-layered.

The Dogzilla is Doggy-Style’s most popular item, also displaying a cohesive blend of Asian ingredients. This handsome hot dog uses a caraway-specked pork bratwurst, soft and mild, topped with cabbage slaw, teriyaki sauce, wasabi mayo, and a thicket of marinated seaweed. It’s a perfect blend of salty, sweet, and spicy. The owners bill this one as the “sushi of hot dogs,” a bit of a stretch. Still, who knew that German sausage could be such an effective platform for showcasing Japanese ingredients?

Doggy-Style’s journeyman wiener is the kosher beef, suggested for most of the signature combos. It’s a big, explosively juicy frankfurter, crisped up on the grill and served with a bit of char. The beef frank is well-suited to the Umai, a Dogzilla variant with pickled radish instead of slaw, and the Banh Mi, a new-school send-up of the Vietnamese classic. The Chicago dog is a fine take on the standard, replete with frightening neon sweet relish, tomato wedges, mustard, pepperoncini, onions, and loads of celery salt. Midwestern diehards may take umbrage with this one using a non-steamed dog, but really there’s no pleasing those people. Bringing up the rear is the beef Fiesta Dog, topped with pico de gallo, tortilla chips, and cilantro mayo. Watery and bland, this was my least favorite entry.

Confession: I skipped the chili cheese dog and the All-American, topped with bacon, cheese, barbecue sauce, and coleslaw. They’re probably fine, but my heart was starting to seize. Plus I needed room for one more hot dog.

Before leaving Alameda, I took a spin by the Pampered Pup to re-visit the classic steamed dog. In a Starbucks-style semantic twist, their basic hot dog is called a deluxe, and it costs around $3.50 (only fifty cents less than the basic Doggy-Style). It wasn’t an awful hot dog, just … uninspired. The meat resided in that gray-pink area between pork and beef, and it didn’t have much more snap than the spongy white bun it inhabited. And the topping selection: no-frills. Big spenders can add canned chili, Velveeta, or Chicago-style veggies for around a dollar, but it’s a losing battle.

That’s not to say a basic hot dog can’t be done well. Back in the day, I used to hoof it down to Manhattan’s Chinatown for the all-beef steamer at an obscure stand near the bus terminal. Their plump, juicy dog had just the right amount of snap (the basic hot dog barometric) and the steamed bun was a touch sweet and not soggy. Plus it cost a buck.

But that was not The Pampered Pup. Easily upstaged by the new guy in town, without even low cost in its favor, how long can this place survive on aesthetics and nostalgia alone? Like other curmudgeons, I’m resistant to flashy young upstarts — but it’s hard to resist delicious innovation.