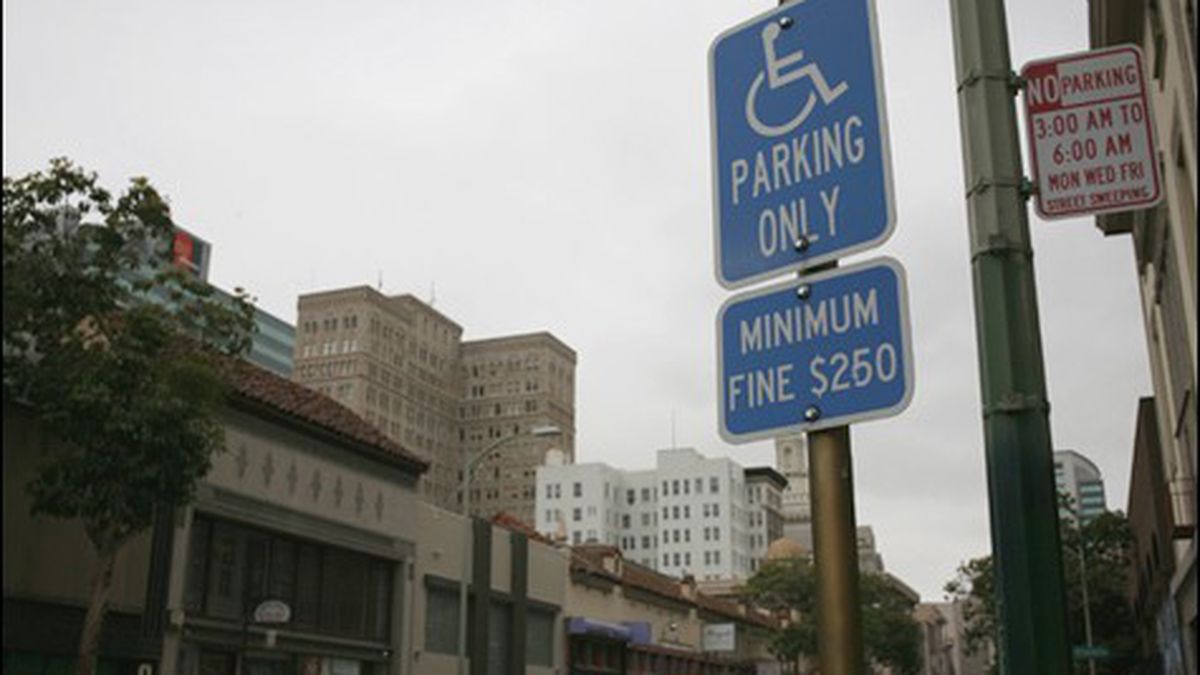 Transit planners say the policy leads to widespread fraud and nightmarish traffic, plus it robs cities and retailers of much-needed revenue.

People often complain about not being able to find parking in downtown Oakland and other cities during the day. And a growing body of research suggests that many motorists are making the problem worse by fraudulently using disabled parking placards so that they can park for free indefinitely in any spot they choose. This abuse not only makes parking far more difficult in urban areas, but it also robs cities of much-needed parking revenue and retail stores of customers who decide not to shop downtown because they can’t find parking.

On a recent weekday, I surveyed a handful of crowded city blocks in downtown Oakland, and the evidence of placard fraud was widespread. As of 2011, the latest year in which data is available, less than 10 percent of registered vehicles in Alameda County had disabled parking permits. But on Webster Street, between 15th and 20th streets, I found that half of the vehicles parked in metered spots were displaying disabled placards. And in Chinatown, 60 percent of the 85 cars I counted had disabled placards. A parking enforcement officer I spoke with said that such a high count isn’t unusual: She estimated that on any given weekday, 50 percent of the vehicles in downtown Oakland have blue placards.

During the brief time I spent surveying parked cars, two people approached me separately — and unsolicited — to express their disdain for placard abuse. “I hope they nail those sons of bitches,” said Rob Bond, who works in an office building downtown. “I have a sister in a wheelchair and she can never find parking …. But these people park here all day and they don’t pay anything.”

California began exempting disabled people in 1972 from having to pay meter fees and honor posted time restrictions for parking. The policy was meant to reduce transportation barriers for people with disabilities, but it also created a strong incentive for able-bodied people to illegally use disabled placards. “I think this law is extremely well-intentioned, but it has generated a lot of waste and a lot of fraud,” said Michael Manville, a professor of city and regional planning at Cornell University and one of the leading experts on the issue. “And I don’t think most of the benefits go to the people who need and deserve them.”

To combat the widespread problem of placard fraud, many urban planning experts are proposing to reform California law so that disabled people will have to pay for metered parking. Their hope is that once parking is no longer free, the incentive to steal or fraudulently use a disabled placard will disappear.

While some might find such a proposal insensitive, experts believe it will generate a lot of revenue for cities; cut down on traffic congestion; reduce greenhouse gas emissions (because motorists won’t have to circle city blocks in search of parking spaces); and, if enacted well, benefit low-income people with disabilities.

Some disability rights activists, however, likely would oppose such a plan. “Free parking is one component in eliminating barriers to transportation to people with disabilities,” said Marilyn Golden, senior policy analyst at the Disability Rights Education & Defense Fund, an organization that tries to ensure accessible parking to people with disabilities. Golden added that eliminating the fee exemption “would very likely not have the full support of the disability community.”

However, in recent years, Washington, DC, Philadelphia, and St. Louis have all begun to charge disabled people for parking — and there’s been little public outcry as a result. Most disabled motorists, after all, have the financial wherewithal to pay for parking. A little more than 20 percent of people with disabilities in California were classified as low-income in 2010, compared to 13 percent of the general population that year, which shows that while there is a correlation between having a disability and being poor, it isn’t a strong one. “The fee exemption gives a lot of affluent people free parking … and it doesn’t help people who are too poor or too physically impaired to drive,” noted Manville. “Even if there wasn’t fraud, this would be a pretty lousy policy.”

Few would argue, however, that people with severe disabilities don’t need easy access to parking. Michigan, for example, has adopted a two-tiered placard policy, which only gives people with serious disabilities free parking. Last year, 510,000 people applied for placards in Michigan, but less than 2 percent had disabilities severe enough to qualify for the fee exemption.

In the Bay Area, meanwhile, the number of disabled parking placards has skyrocketed in the past decade, jumping by more than 100 percent. Many of the recipients of placards aren’t necessarily disabled — temporary placards, for example, can be issued for ailments as minor as sprained ankles. The increase in the number of disabled parking permits also has far outstripped the growth of the overall population, which has increased by just 5 percent. And with more placards comes more abuse, according to DMV investigator Calvin Woo. “The problem is a lot bigger than people think,” he said. “It typically involves someone using a friend or a family member’s placard.” Woo said that people also steal placards or obtain them illegally by forging a doctor’s signature.

In 2009, Oakland officials estimated that placard abuse cost the city at least $150,000 a year in lost parking revenue, although the true amount is difficult to gauge. In response, the city increased the maximum penalty to $1,000 for disabled parking fraud, and OPD assigned two police officers to investigate the problem.

But it’s a difficult task. Since placards are assigned to people and not vehicles, the only way to detect misuse is to stake out a car, wait for the driver to return, and then confront that person. These types of sting operations can consume a lot of time and resources, which OPD doesn’t have. As a result, boosting law enforcement efforts alone can’t effectively combat parking fraud, which is another reason why experts say the best solution is to require motorists with disabled placards to pay for parking.

This also can be done in a way that doesn’t just benefit the city, motorists, retailers, and the environment; a good policy also would provide more easily accessible parking for people with severe disabilities. Some experts, for example, believe that instead of having a fee exemption, cities should increase the amount of disabled parking zones, and then charge everybody meter fees. Parking time limitations could be extended for people with serious disabilities, as it can be difficult for them to return to their vehicles or get around quickly. Such policy changes would curtail fraud, ensure parking for disabled people, and increase city revenues. The money generated could then be used to fund projects geared toward low-income people with disabilities — such as improving sidewalk access for people in wheelchairs, increasing the number of curb cuts, and expanding public transportation.

In the Bay Area, the San Francisco Municipal Transit Agency (Muni) is currently examining policy changes that could include charging meter fees to people displaying disabled placards and increasing the number of blue zones in the city. But requiring disabled placard holders to feed parking meters would require changing state legislation. If that were to happen, it would open the door for other cities, such as Oakland, to implement similar regulations. Muni officials are still working out the details of their recommendation, and plan to announce a full proposal in mid May.

Correction: The original version of this story misquoted Marilyn Golden of the Disability Rights Education & Defense Fund and misstated her job title. The story has been corrected.

Grease Trap: Somebody Stick a Fork in Spieler