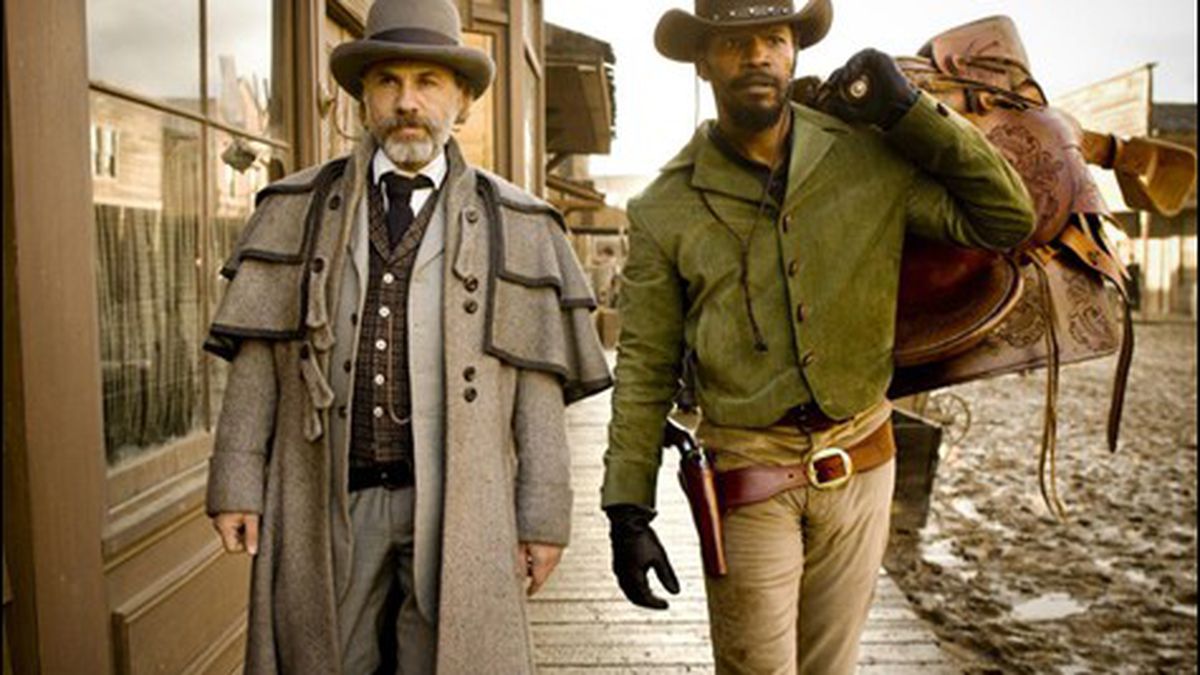 Quentin Tarantino is very probably the most exciting movie-maker working today. Each new project explodes from the screen packed with pleasures and provocations, and just because they’re calculated does not lessen their impact one bit.

The 49-year-old writer-producer-director-actor certainly has his detractors, but they’re not nearly as numerous as his imitators, who typically get around to copying Tarantino’s earlier movies just as his latest is being released. That new one is always reasonably unpredictable, as long as we grant him the constants of ultra-violence and naughty talk. (It might be fun to see what a Tarantino romantic comedy would look like — or maybe it’s already been done: Kill Bill.)

Django Unchained finds the filmmaker in a lighthearted mood, if a kinetic meditation on race hatred, cruelty, and general misanthropy in the US, circa 1858 (“Before the Civil War,” announces a title card), qualifies as lighthearted. Dr. King Schultz (played by Christoph Waltz), a former medicine man and bounty hunter on assignment in Texas, makes the acquaintance of Django (Jamie Foxx), one of a party of slaves shackled together and marched across the countryside. The two men join forces and together set out for Greenville, Mississippi, where Django’s true love Broomhilda (Kerry Washington) is in bondage on a plantation called Candieland.

German immigrant Schultz and African-American Django, newly purchased and freed by the doctor, meet a passel of outlandish characters on their quixotic trip into the deep, deep South. One of the biggest thrills in any Tarantino pic is seeing how the director paints with personalities. He studs the landscape (the film was shot in Louisiana, California, and Wyoming) with remarkable faces, not only his usual rescued-from-oblivion former drive-in stars but relatively bankable actors as well.

Waltz and Tarantino stock player Samuel L. Jackson steal the show, the latter as Stephen, malevolent majordomo of Candieland, shuffling and tomming with his “kindly old darky” act until just the right moment. It’s Jackson’s single-best acting job for QT, outstripping even his Ordell in Jackie Brown. As for Waltz, he’s one of the best character actors in the business (Inglourious Basterds, Roman Polanski’s Carnage), now fully at home in Quentinville. Note how Schultz prefers to operate within the law — a comment on the institutionalized brutality of that long-ago day. But let’s not overlook Leonardo DiCaprio as Calvin Candie, decadent master of Candieland, slurping the fruity dialogue like the Polynesian cocktails he serves his guests. (If Tarantino decides to remake Caligula, DiCrappio has our vote for the title role.)

It has been noted already that Ms. Washington’s role as the German-speaking “prize slave” — a MacGuffin — is woefully tokenized, leading the conspiratorially-minded to wonder about Tarantino’s attitude toward his African-American characters — this in a revisionist version of history as it should have been, in a flamingly anti-PC shock wrapper dripping with irony. Don’t sweat D.W. Griffith, although Tarantino most assuredly does. Mr. T’s objective, in visual and thematic terms, is closer to Mandingo (1975, directed by Richard Fleischer) and its sequel Drum (1976, directed by Steve Carver), a pair of hot-button slavesploitationers no doubt on Tarantino’s required viewing list. At least no one in Django Unchained gets boiled in a cauldron like corrupt master James Mason in Mandingo.

As for Django himself, the “hero” role in this type of braciole is always the weakest link in the flick — just watch Nero in the newly re-released original Django (at Rialto Cinemas Elmwood in Berkeley) if you don’t believe that. Foxx’s Django is brave, clever, manly, determined, tough, and as charismatic as a Conestoga wagon wheel. But you’ll never hear him complain.

Django Unchained functions best as a bloody, tongue-in-cheek, whole-hog corrective to The Birth of a Nation, with overtones of the salacious Seventies junk-fu so many of us cannot live without. It would make an ideal twin bill with Spielberg’s Lincoln. The biggest problem would be which one to show first, but we have a feeling that if Tarantino’s movie led off, audiences at the second feature would howl at every line coming out of Daniel Day-Lewis’ mouth. Django Unchained is a masterpiece partly because we need it so badly.