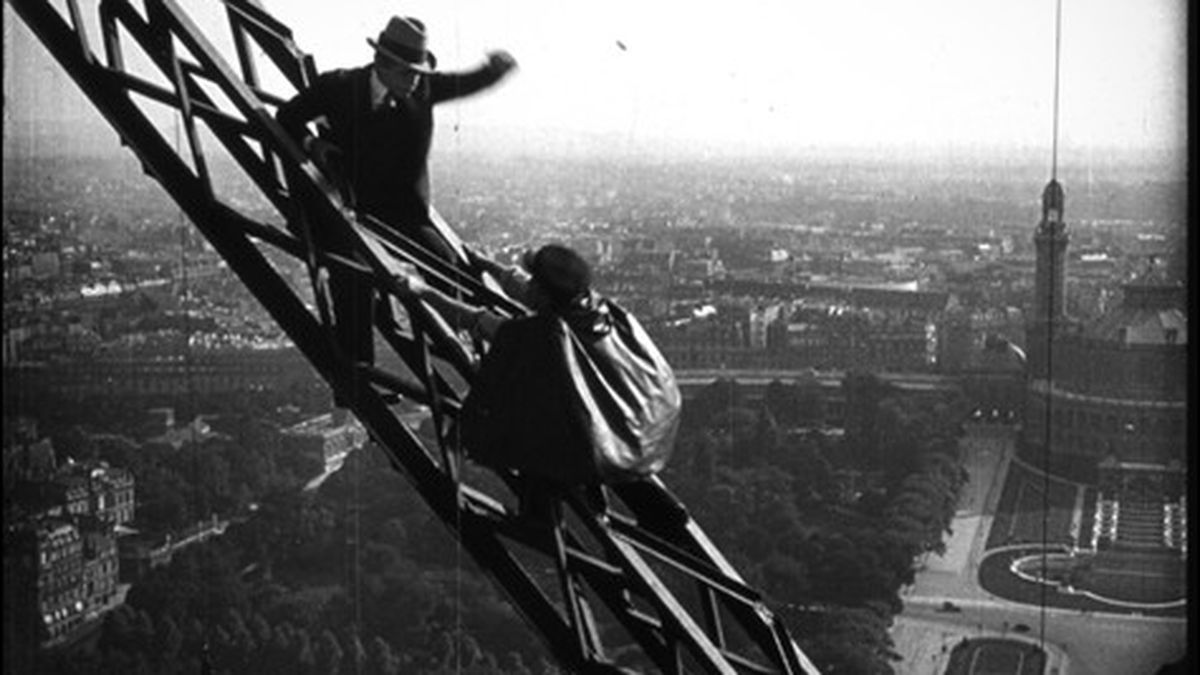 Back to the future, silently, at the Pacific Film Archive.

Here it is 2012 and we’re still watching silent movies. In black-and-white. From 1918. And with Danish subtitles, yet. Such are the nooks and crannies of the shared entertainment experience in the Bay Area that the San Francisco Silent Film Festival is one of the most popular and successful movie events of the year.

Lately, the Silent — in a marketing move that’s been adopted by more and more film fests — has been offering special one-offs outside its usual July perimeters. The prime example is the upcoming American premiere of the full restoration of Abel Gance’s 1927 masterpiece Napoleon, booked for two weekends at Oakland’s Paramount Theatre beginning March 24. But there’s also a new package of old silents, “Dizzy Heights: Silent Cinema & Life in the Air,” co-presented by the Pacific Film Archive and the Silent Film Festival, which begins on Thursday at the PFA (2575 Bancroft Way, Berkeley, 510-642-1412, BAMPFA.Berkeley.edu).

As the title suggests, the unifying theme of “Dizzy Heights” is the then-new science of aeronautics, and how the narrative and visual concepts of human-engineered flight found their way into the consciousness of early filmmakers. Patrick Ellis, a doctoral Film and Media student at UC Berkeley, evidently curated the four-day, ten-title mini-series with an eye toward melding the then-avant-garde ideas of cinema and manned flight in a neat artistic package, but it works just as well as a primer of antique science fiction.

Holger-Madsen’s A Trip to Mars (original title: Himmelskibet, or Sky Ship) is frankly silly. The 1918 Danish production picks up where film pioneer Georges Méliès left off by showing the misadventures of an intrepid explorer named Avanti Plenataros (Gunnar Tolnæs), who organizes a voyage to the Red Planet aboard the dirigible Excelsior, in which he and his crew dine on china plates. Avanti is obviously a bit crack-brained, and the project has its problems. At home, Professor Dubius (Frederick Jacobsen) ridicules the venture, and once in space, a boisterous crew member named David Dane (Svend Kornbech) takes to whiskey and foments a short-lived mutiny.

But all that is forgotten once the ship lands on Mars. The planet’s inhabitants, who very much resemble the folks back on Earth, dress in long, flowing robes, speak a universal language, and eat only vegetables. They also have abolished warfare and practice Martian love under the Tree of Longing. They’re so … evolved. It isn’t long before the earthlings trade their smart leather flying suits for white tunic-and-skirt ensembles, and go native. For Capt. Avanti, this happens when he encounters the pretty peace ambassador Marya (Lilly Jacobson), a sort of outer-space Duncan dancer who agrees to become Mrs. Avanti, and to relocate to Denmark with her new husband. Bridal chamber on the spacecraft! Peace and love in Europe, at long last! A Trip to Mars screens on Thursday, February 23, at 7 p.m., with live music by Bruce Loeb and an introduction by Mark Sandberg.

Of course, there is nothing quite as foolish as outdated sci-fi. But High Treason, a 1929 British thriller by director Maurice Elvey, at least has the advantage of a reasonably coherent plot — with echoes from the recent past (Fritz Lang’s 1927 Metropolis) as well as the future (Things to Come, Nineteen Eighty-Four) in its story of organized pacifists staging civil disobedience in order to halt an impending world war between the Federated States of Europe and the Atlantic States (aka the USA) in the far-off year of 1950.

Amid Soviet-style montage in a scale-modeled London, Dr. Seymour (Humberston Wright) and his headstrong daughter Evelyn (Benita Hume) of the “unpatriotic” World League of Peace oppose the war hysteria promoted by a cabal of arms merchants. One again, as in A Trip to Mars, tight black leather military uniforms are the fashion of the future — the Peace League’s leathers, however, are all white. The crucial moment occurs when the female workforce of a munitions plant stages a factory takeover and storms an aerodrome to avert the conflict, impressing army officer Michael Deane (Jameson Thomas), Evelyn’s would-be boyfriend. Best exchange of dialogue, in a discussion on the likelihood of war: “People today are much too sensible.” “That’s what they said in 1914.” High Treason was released in both silent and sound versions, but obviously the Silent Film Festival is only interested in the former. It screens on Friday, February 24, at 7 p.m., with live accompaniment by Peter Chapman.

The treat of the series is probably Julien Duvivier’s The Mystery of the Eiffel Tower, a very rare 1927 French spy yarn greatly enlivened by its Parisian location work, including a thrilling dénouement with flics chasing spies up the girders of the title tourist attraction, in real time with no CGI. Actor Félicien Tramel portrays a pair of formerly conjoined twins who exchange identities in order to foil the plot of yet another sinister cabal, the Ku-Klux-Eiffel, who wear black-hooded regalia (à la the American Ku Klux Klan, but also harking back to Christian inquisitors) and who are somehow jamming Paris’ radio transmissions from their secret command post (huh?) at the top of the Eiffel Tower.

Le mystère de la tour Eiffel, written by Alfred Machard, reportedly influenced George Remi, aka Hergé, the creator of the Tintin adventures, and that’s certainly believable — the action careens from Paris to a mountain castle, with beaucoup de aerial shots as well as stunt flying biplanes. The print being shown on Saturday, February 25, at 6 p.m., is from the only known copy of this film, restored by the EYE Film Institute Netherlands, with Dutch subtitles and live English translation. Ralph Carney and the Serious Jass Project provide live musical accompaniment.

The series touches down on Sunday, February 26, with a compilation of familiar and not-so-familiar silent shorts on the same themes of flights of fancy, including both the Edwin S. Porter (1906) and the Winsor McCay (1921) versions of The Dream of a Rarebit Fiend; Walter Wright’s Dizzy Hearts and Daring Hearts (1916); and Méliès’ The Conquest of the Pole from 1912. Should be a soft landing to reality.&#8;

Comfort Food for the New Economy

Sexy Is the New Scary