Court documents reveal that some Oakland police commanders believe cops could avoid shooting suspects if they were allowed to "rough" people up. 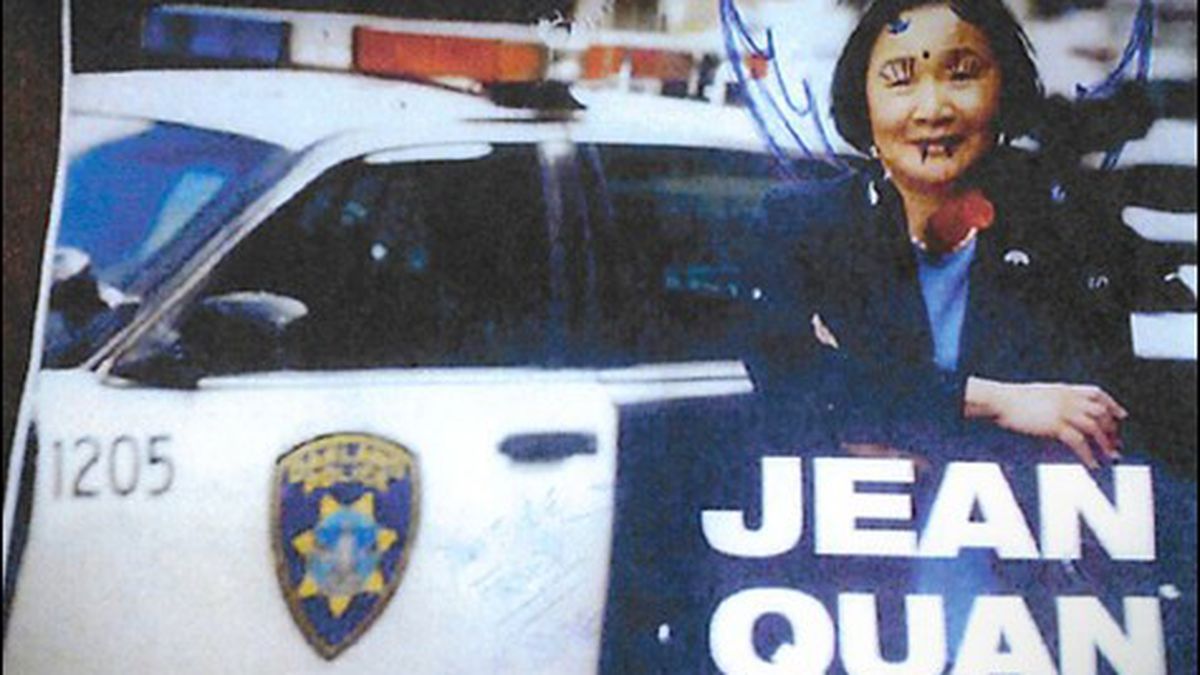 Correction: The original version of this story mistakenly stated that private investigator Jan Gilbrecht had been hired by civil rights attorneys John Burris and Jim Chanin.

The official request last week to put the Oakland Police Department in federal receivership grabbed much media attention. But overlooked in the voluminous documents filed by civil rights attorneys John Burris and Jim Chanin was disturbing new evidence that raises significant questions not only as to whether the City of Oakland can stave off receivership, but also whether OPD’s dysfunctional culture has changed at all in the past decade or if it’s doomed to remain that way for years to come. Among other things, the new evidence shows that department trainers and commanders have been telling city residents, and possibly new police recruits, that Oakland cops shoot suspects because they’re no longer allowed to beat them up.

According to sworn testimony from Jan Gilbrecht, a private investigator who attended an Oakland Citizens’ Police Academy on May 21, OPD Sergeant Randy Pope told attendees of the academy that Oakland was traditionally a “blue-collar kind of town,” with a “blue-collar police force that maybe in the past was a little ‘hands on’ with folks, liked to put their hands on people and maybe got rough sometimes, but did not have that many officer-involved shootings.”

According to Gilbrecht, Pope then talked about the federal consent decree that mandated reforms of OPD following The Riders scandal early last decade: “Some city lawyers came in and said, ‘We want a white-collar kind of force now,'” and the city agreed to the reforms. Pope then added that he believes Oakland cops have become less inclined to use physical force on suspects, resulting in fewer complaints, but that they fire their weapons more frequently at suspects. “What do I know, I just look at the situation and do the math. It’s more physical-use-of-force complaints but more live bad guys on the other hand, versus the NSA and more shootings on the other hand. What do you choose?” Pope asked the audience.

The Citizens’ Police Academy is designed to enlist city residents to help police combat crime in Oakland. Even more alarming is the fact that Sergeant Pope, who lives in the far-East Bay suburb of Oakley, is a firearms and use-of-force instructor at OPD’s training academy for new police recruits. His comments to the citizens’ academy thus raise concerns as to whether he’s repeating the same statements to new police officers, telling them that the federal consent decree leaves them little choice but to shoot suspects. Pope’s comments also are in stark contrast to official statements from OPD brass that the consent decree is not hampering police work. “It’s telling that they’ll say this in a room full of citizens in the Eastmont substation — and it’s completely opposite to what they say in court,” Chanin said in an interview.

The evidence uncovered by Burris and Chanin also offers insight into the contempt that some OPD line officers have for federal Judge Thelton Henderson, a civil rights hero and Carter administration appointee who oversees the consent decree and was responsible for reforming the state’s troubled prison health care system. Henderson will decide whether OPD is put in federal receivership. According to sworn testimony from Nancy Appel, an associate director at the Anti-Defamation League who also attended the spring 2012 Citizens’ Police Academy, Sergeant Greg Porritt told attendees that Judge Henderson “has an agenda,” was “in the SLA [Symbionese Liberation Army]” or represented them in court. Both are false assertions.

Racially insensitive, defaced photos of Henderson and Mayor Jean Quan that had been posted at OPD headquarters were also included in the court filings. The one of Henderson depicts him with enlarged eyes and exaggerated lips, and one of the images of Quan shows her standing alone by a police car with dragon wings, horns, and slitted eyes drawn on her by a blue pen. There’s also a photo of Quan and former Mayor Ron Dellums that looks as if it was used for a dartboard. The caption stated: “If you thought Ron Dellums was a good Mayor…YOU’LL LOVE JEAN QUAN.”

The Express previously reported about a flyer posted on a bulletin board at OPD’s basement training range in winter 2010. According to police sources, the flyer, which superimposed a picture of a World War II fighter pilot over derogatory language about anti-war liberals, was still posted there until August.

The several hundred pages of evidence filed by Burris and Chanin trace the past ten years of stop-and-start reform, including the department’s questionable history of uses of force, lax supervision, failure to rein in problem officers, and poor leadership that have combined to lead OPD astray in a manner unique in American law enforcement. Burris and Chanin contend that OPD’s progress on reforms has ground to a halt, and their assertions are supported by reports from the court-appointed monitor that indicate the department has made virtually no progress since January 2010.

Reading through old monitoring reports and court transcripts filed with the receivership motion elicits a sense of déjà vu. Judge Henderson’s response to a negative monitor’s report in February 2005, two years after the consent decree began, reads like his comments from last fall: “I’m not given to overstatement, but I haven’t seen anything like this in 25 years. This is so unacceptable that I’ve been spending my time deciding what I can do to get the attention of the defendant [the city and OPD]. This is contemptuous. I’m so angry at the slap in the face, the ignoring of this decree that my question is who’s responsible and how can I get them in front of me?”

As this newspaper noted in January (see “Will OPD End Up in Receivership?” 1/25), OPD’s response to Occupy Oakland also is playing a major role in the case, as is the review conducted by Frazier Group, LLC, of the October 25 raid on Occupy Oakland and its aftermath. In a sworn deposition in the consent decree case, Thomas Frazier, the former Baltimore police commissioner and longtime member of the San Jose Police Department, heavily criticized OPD’s internal affairs and criminal investigation divisions’ handling of the incident in which war veteran Scott Olsen was seriously injured by a cop. Portions of Frazier’s deposition also reveal that Sergeant Jim Rullamas was the officer in charge of the criminal investigation into Olsen’s wounding, which this reporter revealed had been “compromised” in June (see “OPD Screws Up Scott Olsen Investigation?” 6/13). It was Rullamas’ decision to prematurely close the criminal probe that led the Frazier Group to voice concern and advise OPD to re-open the file. Frazier also said in his deposition that his staff questioned OPD’s accounting of the videotaped beating of Kayvan Sabeghi by OPD Officer Frank Uu on November 2, stating that Uu’s report of the incident and a video of it “did not jibe.” (See “Cop Identified in Kayvan Sabeghi Beating?” 4/11.)

The evidence filed by Burris and Chanin also confirm and clarify City Administrator Deanna Santana’s attempts to hide many of the Frazier report’s key revelations, including the botched Olsen case (see “Santana Tried to Alter Damning Report,” 9/19). Frazier’s deposition includes a succinct response to questions about Santana’s requests to have the report sent to her personal email in Microsoft Word format so that she could easily redact key portions of it.

“Chanin: Did she want to remove your findings?

The new evidence also confirms that former Police Chief Anthony Batts did nothing to reform the department and meet the requirements of the consent decree, also known as the Negotiated Settlement Agreement, or the NSA. In a deposition, current Police Chief Howard Jordan said Batts “didn’t understand the tenets of the NSA, the history,” and that the reforms were “too much for him to absorb.” OPD’s stagnation on reform efforts began during Batts’ tenure, which lasted from 2009 to 2011.

Portions of Frazier’s deposition also indicate that members of Jordan’s own command staff do not have confidence in the integrity of OPD’s internal affairs or criminal investigations division when it comes to probing allegations of police officer misconduct. “I have little faith that IA can get it right and have even less faith that CID will do the case right. The CID investigation would be a waste of time,” a commander who court documents identify as one of Jordan’s deputy chiefs, told one of Frazier’s staffers. Jordan’s deposition revealed that he was unaware of the unrest among his ranking subordinates over shoddy internal investigations into incidents such as the October 25 raid on Occupy Oakland and Scott Olsen’s wounding.

In his deposition, Jordan also acknowledged the existing problems concerning police officers’ use of lethal force. “There is a propensity in our organization for officers to point their firearms in cases when it’s not necessary,” said Jordan. However, the chief also claimed that scrutinizing uses of force “takes away from their [supervisors’] ability to supervise their officers.”

Last week, Oakland police union attorney Michael Rains told the Oakland Tribune that the department’s rank-and-file wasn’t necessarily opposed to receivership in light of the “absolute lack of meaningful leadership in the department for the last decade,” including from Chief Jordan. The city has until November 8 to respond to Burris and Chanin’s receivership motion in court. The receivership hearing is scheduled for December 13.