.Dinner at a Dive 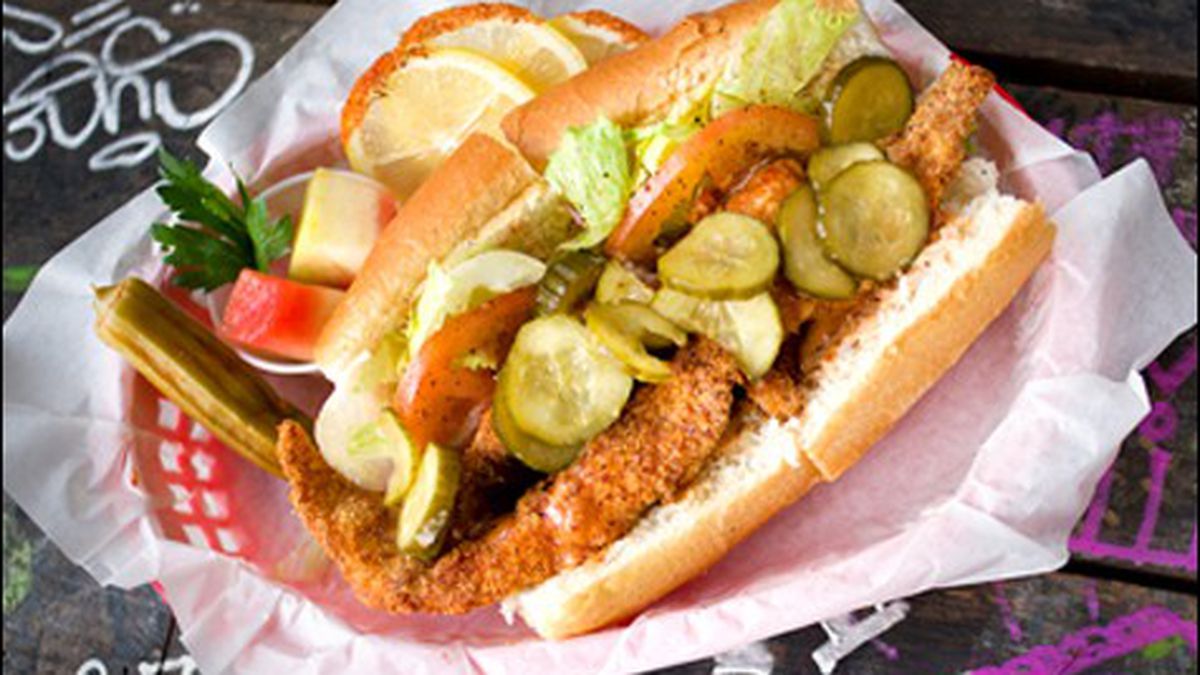 Let’s start by stating the obvious: If you want to eat at Couyon Cajun & Po’boys, the new restaurant inside Eli’s Mile High Club, you have to, in fact, feel okay about hanging out at a punk-rock dive bar.

The smell of marijuana smoke might hang thick in the air. A bearded biker dude might be holding court about some girl he had carnal relations with the night before. But if you’re okay with all of that — with bare-bones amenities, ear-splittingly loud music, and the presence of a rough-looking character or two — the tasty, unpretentious food coming out of the kitchen is worth seeking out.

Truth is, despite its location on a somewhat rough-and-tumble stretch of Martin Luther King Jr. Way and a reputation for being “grimy as shit,” as one online reviewer fondly put it, Eli’s is looking nice after a recent remodel. As far as dive bars go, it’s reasonably clean and spacious, with a cozy indoor dining area (complete with red-checkered tablecloths) and a back patio where most of the crowd gravitates when there isn’t a show playing.

Co-owner Jason Herbers said the biggest part of the renovation project was installing a new kitchen, which he hired David Hledik and Louise Martin, two honest-to-goodness New Orleans chefs, to run. Hledik has a knack for making charcuterie; Martin, who is Korean and Cajun, specializes in Asian fusion cooking, so things like Vietnamese-style steamed buns make an appearance on the menu.

Couyon is, of course, a casual operation: You order at the bar or at the small takeout window in back, and pay with cash. But the food demonstrates an integrity typically found at upscale restaurants and gastropubs. Most of the Cajun and Creole dishes are priced at less than $10, but nearly everything — the sauces, the cured meats, the soup stocks, and the wide assortment of pickled things — is made from scratch in house.

The star attraction is the po’boy, that New Orleans sandwich-shop staple: a French roll stuffed with fried seafood or roasted meat and garnished with lettuce, tomatoes, pickles, and remoulade. My favorite was the Crispy Kitty, a traditional fried catfish po’boy: The cornmeal-crusted fish was piping hot and surprisingly light, and I loved the crunch of the sweet bread-and-butter pickles, the slight tang of the remoulade, and the generous dusting of black pepper on ripe, late-season tomatoes. A damn fine sandwich, all in all.

Nearly as good were The Dauphine — which boasted Louisiana Gulf shrimp instead of fish — and the Pulled Piggy, which was stuffed with tender, slow-smoked pulled pork that was slathered in a North Carolina-style vinegar-based barbecue sauce.

Heat seekers can doctor their sandwiches with one of three house-made hot sauces — a basic red Crystal clone and two habanero sauces that are available by request: the unspeakably fiery “Demon’s Semen” and the tangier, only slightly toned-down “Devil’s Testicles.”

Sandwich construction is a tricky balancing act, as demonstrated by two vegetarian po’boys I tried. The first, a vegan po’boy called The Bywater, was composed of promising parts: fried herb-and-rice-vinegar-marinated tofu, crunchy hoisin slaw, and meaty house-pickled shimeji mushrooms — the kind of fancy touch you’d expect at Hopscotch or Ramen Shop, not a place where the centerpiece of each graffiti-covered table is a big metal bucket that serves as an ashtray. But while the flavors were nice, everything was doused in too much of that rice vinegar dressing, so the fried tofu lost its crunch and the bread became a soggy mess. The jerk tofu po’boy (even fancier-sounding in its composition, with daikon sprouts and “burnt orange cream cheese”) had a similar textural problem, compounded by the fact the predominant flavor was sweetness — none of the complexity or searing heat implied by “jerk.” Still, vegetarian punk-rock-dive-bar connoisseurs will be hard-pressed to find another place that’s putting this much thought and effort into its meatless offerings.

While the sandwiches are the headliners, the appetizers and side dishes are what will keep me coming back. The maque choux was a kind of Creole corn stew, partway between a chowder and a succotash, made with corn, hominy, assorted vegetables, and slices of smoky house-cured salt pork. It was the type of homey, comforting dish that didn’t immediately elicit “wows” or set off fireworks in my mouth. But I also couldn’t stop eating it.

The same could be said for the super-rich mac ‘n’ cheese, which, when topped with an optional add-on of tender pulled pork, made for a filling meal in its own right. And while the spicy beef chili was loaded with more vegetables than beef (good stuff, though: chuck and rib-eye steak, coarsely ground in-house), it packed plenty of flavor — a savory pig-head-stock base and legitimate two-alarm heat.

Perhaps the most memorable of the appetizers was the Cajun-style pork belly “cracklins,” which Hledik said is a snack commonly sold at gas stations in rural Louisiana. I was anticipating something like fried pork rinds, but instead of using just the skin, Hledik and Martin braise cubes of pork belly (skin, fat, and meat), fry them, and then coat them with Cajun spices and sugar. The result is equal parts crispy and succulent — the porcine equivalent to popcorn chicken. We speared these with wooden skewers and alternated between three dipping sauces: a hot sauce, a horseradish mayonnaise, and more of that North Carolina barbecue sauce.

This, my dining partner noted, is what all bar food ought to be like: nothing frou-frou, nothing served in a mason jar, almost everything priced at less than $10 — but everything tasty and made with care.

Ultimately, whether Couyon will thrive at Eli’s depends on the extent to which the population of folks who enjoy hanging out there intersects with the gourmand population. (For what it’s worth, I never saw any other bar patrons order a four- or five-dish feast, for a full sit-down dinner.)

Herbers said he’s well aware that the scene at Eli’s isn’t for everyone, citing a handful of awkward instances when a family showed up, young kids in tow, and was taken aback by the gritty environs. As Herbers put it, “The people who are into it stay, and the people who aren’t — they go.”

And for those who want to have it both ways, there is this tidbit of good news: Starting on November 1, you can call in and have your food delivered.