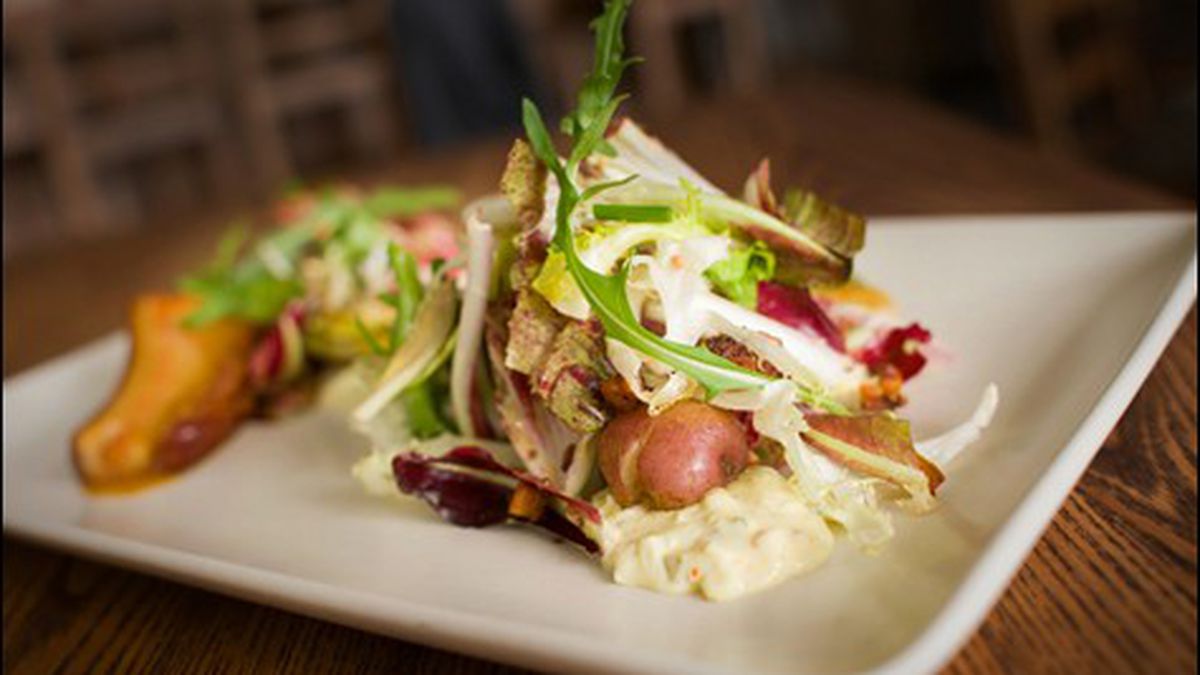 I thought Haven’s excellence was a foregone conclusion. After all, this long-anticipated restaurant in Jack London Square is owned by culinary heavyweight Daniel Patterson, a man who clocks James Beard nominations like they’re Yelp reviews. And Kim Alter, the young chef he brought on to run the kitchen, is a NorCal wunderkind. Her résumé includes some of the most revered kitchens on the West Coast (Ubuntu, Manresa) and her last restaurant in Sausalito — Plate Shop — made critics go weak in the knees.

I previewed Haven early last fall, when it was a weekly pop-up run out of Plum. The food was impressive, even at that new phase; I couldn’t wait to see its capabilities once all pistons were firing. For the official review, I thought I’d be yet another Alter acolyte, filing a straight-A report card to post on her crowded fridge. Who could have predicted that I would walk away from Haven disappointed, dispirited, and baffled?

I wish I could say it was just an outlying issue or two, or chalk it up to that old chestnut, “no accounting for taste.” But my visits to Haven were an unexpected confluence of problems: sub-par service; sloppy mistakes; and ornate, fussy dishes that were less than the sum of their parts.

Stepping inside for the first time at 8:30 on an early weeknight, the packed dining area thrummed with the electricity of a Saturday. A mixed-age crowd was dressed in NorCal casual, belying the restaurant’s spendy menu. The design sense was a familiar combo: subdued warehouse chic, reined in with hardwoods and potted plants.

Like paintings on a gallery wall, the aesthetics of Alter’s food provided rich contrast to the brick-and-beam backdrop. The elaborate interplay of shape, color, and texture was often quite striking. Take the day boat scallops, where endives and multicolored beet slices formed a pair of free-form question marks, with scallops acting as the dots below. Bursts of blood orange purée, trumpet mushrooms, and beet greens rounded out the picture, managing to convey symmetry and abstraction all at once. In a word: gorgeous.

Sadly, form far outmatched function. Though tender, the scallops were over-salted and barely warm. The endives were ashy and burnt on the outside, yet tough and almost raw within. And the mushrooms bore the unmistakable rubber of excessive cooking, contrasting oddly with the easy chew of the beets.

Another pretty dish, the crisp-skinned arctic char, was surrounded by a flurry of pear slices, kohlrabi, and mixed mushrooms, served atop a sweet kimchi pear purée. Everything looked great until I forked a bite of cold fish — all the heat had sapped out by the time it reached our table.

The braised bacon starter was a multi-part dish that never quite synced up: a chicory salad in mustard vinaigrette, a large piece of soft, braised bacon, and smashed fingerlings near a pool of eggy gribiche. The various items were uneasy platemates, unsure how to mesh their diverse roles.

Smaller items fared better. A lush butternut soup got its wings from coconut milk and a bit of mint, sweetened with nuggets of charred date and compressed apple. Fingerling potatoes — fried, smashed, and Asian-dressed in seaweed and soy — were a pleasant-enough diversion. And a basket of warm, chewy rolls, generously topped with large salt crystals, harkened back to the famed pretzel croissants of New York’s City Bakery.

Other dishes were simply underwhelming and overpriced. The shepherd’s pie was a rustic throwback with modernist tweaks — aerated potato foam, pig’s blood thickener in the mirepoix — but failed to surpass its more traditional brethren (except in its $25 price tag). The “Vegetables From the Market” dish was a simple bean cassoulet, topped with citrus gremolata and a duck egg. The gremolata was lost in the mix, and a smatter of smoked mustard greens and escarole didn’t mask the fact that I paid $17 for a small bean dish I could whip up at home (the farm-to-table lament).

Before ordering the market vegetable dish, we had asked our server what was in it. He replied: “It’s some kind of bean stew with an egg on it. Honestly, that’s all I know,” then stood there smiling amiably, not offering to find out more. This moment typified Haven’s friendly but markedly careless pattern of service. On both my visits, drink orders were forgotten, dirty dishes sat on the table long after we finished eating, and conflicting descriptions were given for various menu items. On my first visit, after fifteen minutes of sitting at the bar unnoticed, a blasé bartender wordlessly slid me a menu and disappeared. On my last visit, the server never returned at the end of the meal; we had to flag someone down for the dessert menu and check.

With the food, as with the service, I am perplexed. Patterson has a reputation as a fierce master of detail; I’ve heard multiple stories of staffers fired for minor infractions. And Alter is a fabled micromanager in the kitchen, striving for near-perfection at all costs. So why were the service and meals so flawed?

Maybe I happened to witness unlucky nights, when the rhythm was off and issues plagued both halves of the house. Or perhaps I visited too early in Haven’s adolescence. Its had two months (four, if you count the pop-ups) but could still be adjusting to the demands of unanticipated popularity. I’d love to return at some point, trying one more time for a meal that matches my expectations. Then again, it stings to be disappointed at price points so high. I may leave the trial and error to others.