The Bay Area hip-hop supergroup's sophomore album picks up where its debut left off. 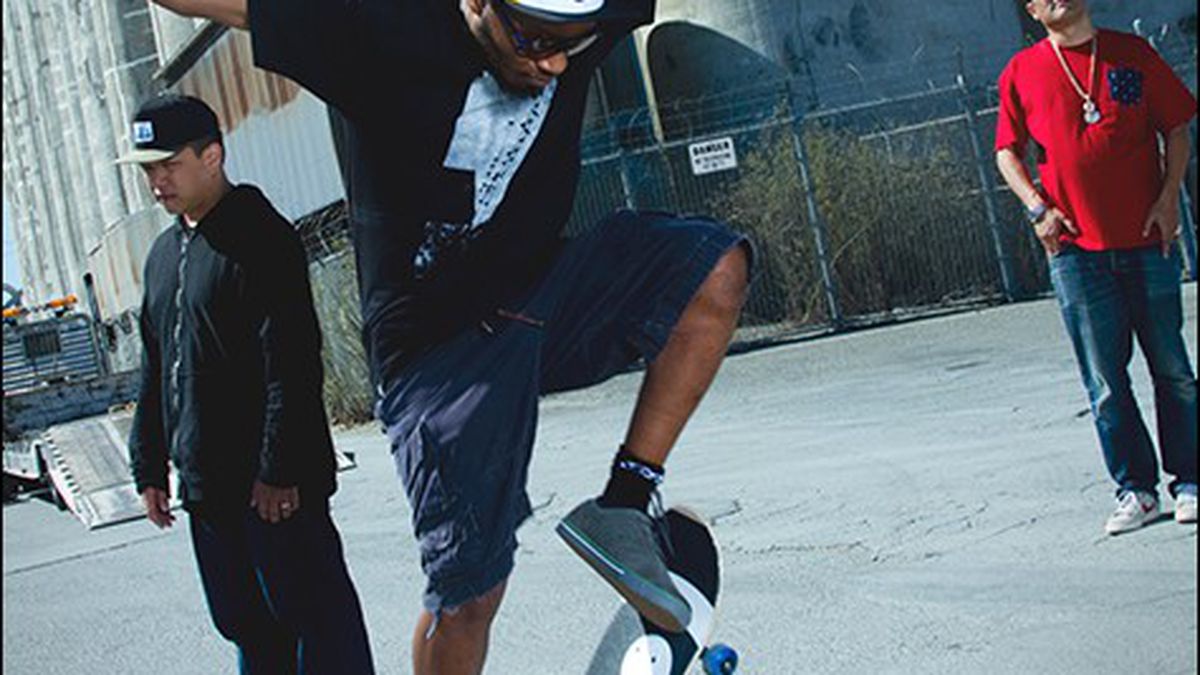 Thirteen years ago, a Bay Area hip-hop supergroup composed of rapper Del the Funky Homosapien, producer Dan the Automator, and DJ Kid Koala released an album under the moniker Deltron 3030. It was a sci-fi concept album about a post-apocalyptic, intergalactic empire and the messianic duo of Deltron Zero (Del’s alter ego) and Dan the Automator, and it ended up being the kind of underground sensation that friends passed along to their peers in smoke-filled living rooms.

In the years that followed, speculation about a sequel grew. Rumors of the record’s completion would occasionally intermittently crop up, only to be dismissed. The longer it took for the record to wrap, the greater the pressure became to deliver a perfect product — which, in turn, led to further postponements. Although Del reportedly wrote all of his parts for Deltron 3030 in a two-week creative blitz, it took the emcee the better part of the Aughts to come up with lyrics for Event II, Deltron 3030’s recently released sophomore album.

“For a concept album, you gotta be able to string ideas together,” said Del (né Teren Delvon Jones) in a recent phone interview, explaining that working within the sci-fi genre made things even trickier. An avid manga reader and gamer, Jones looked to graphic novels and the classic Japanese videogame Mega Man for inspiration when he constructed the Deltron Zero character and his surrounding universe. Sure, 3030 was filled with plenty of punch lines that would fit in any Del song, but Jones also wove in intricate allusions to draw laughs as well as nods of respect from the Comic-Con set.

“You need to be [on point] or else real science fiction fans will be like, ‘Eh…,'” Jones explained. “You have expectations to live up to.”

“There was a feeling of responsibility,” added Dan Nakamura (aka Dan the Automator), explaining why the album’s release took so long.

There’s no question that Event II lives up to the Deltron 3030 name. Nakamura’s melding of classic hip-hop aesthetics with retro and futuristic samples strikes the same delicate balance he achieved on 3030 — as if a space-traveling producer stumbled across a record crate filled with A Tribe Called Quest and Pharcyde albums. Del shows he still has the lyrical chops and aural acrobatics that have made him a marquee name in the underground hip-hop scene since the Nineties. And DJ Kid Koala tastefully interjects scratching and vocal snippets from cheesy science fiction recordings, demonstrating that skilled turntablists still have a place in music.

However, Event II is a decidedly darker record than 3030, reflecting the disenchantment the artists feel over the current state of world affairs. It makes sense, considering how many of the dystopian details in 3030 ring true. Since that album’s release, the nation’s income gap has continued to balloon and big banks have been bailed out with few high-profile criminal indictments.

“I saw a lot of things coming,” Jones said.

“Nothing really changes,” Nakamura agreed. If anything, he said, the corruption of the system has only become “more readily apparent.”

The world into which Deltron Zero and Dan the Automator return on Event II is a bleak hellscape: Music has been outlawed and mega-corporations are out to make a buck, regardless of the consequences. It’s a gritty future, devoid of any kind of Jetsons sheen, in which pollution-spewing smokestacks line the horizon, trash litters the streets, and the few, exorbitantly rich can afford the good life in cordoned-off communities, while the rest of the world languishes in poverty.

We join our intrepid heroes after the passage of ten years. On “The Return,” Deltron Zero and Dan the Automator come home to find the situation has devolved since Deltron 3030: The streets are overrun by marauding bandits, stragglers roast varmints for food, and “privateers” regularly assault “constellation patrols just to overthrow and obtain supplies for side that they ride for.”

Yet, while certainly bleak, Event II is not about resignation. After giving us the lay of the land in his first verse of “The Return,” the wayward space cowboy Deltron Zero happens upon a group of street thugs, high on “nitro-9” and preparing to assault a woman. She at their mercy — or so they first think, he chuckles, before dispatching them quickly and liberating the damsel in distress.

Nakamura deploys a wide variety of analog samples — including punchy soul horns and bright, overdriven guitar — to provide a warm counterbalance to his icy synth patches. He sticks mostly to live drum sounds throughout the album, alternating between the traditional, laid-back boom-bap and up-tempo breakbeats of classic hip-hop. We encounter the latter on the record’s third track, “Pay the Price,” in which Deltron Zero meets a businessman peddling cheap escapism who laughs at the idea of “introducing deeper concepts.”

But the emcee has a prescription for the shallow consumerism that has blighted the planet: His answer comes in the powerful one-two punch, “Melding of the Minds,” a blistering track featuring former Rage Against the Machine vocalist Zack De La Rocha on the chorus, which takes a jab at the One Percent by advising the disenfranchised masses to block The Man’s invasive mental waves.

Yeah! We’re in town, Deltron Zero raps. No need to fear, unless you’re greedy and completely in a weird place where you can’t understand that one man can’t possibly have everything the eye can see. That’s followed by De La Rocha’s shockwave chorus, which is accompanied by a syncopated breakbeat, laser gun-fire, and snap-back vocal delay as spastic guitar bursts and string bends hit in unison with the swift hacksaw cuts of shrill strings, creating the feel of a kung-fu fight scene in a 1970s Blaxploitation flick. It’s positively electric.

Like 3030, Event II is also interspersed with skits. Although this time around, the comic relief is provided by a decidedly better-known set of players. Andy Samberg’s The Lonely Island contributes a rap track remembering the good ol’ days before “time travel was easy peasy,” and actors David Cross and Amber Tamblyn bicker about how doggone hard it is to eat levitating sandwiches and reminisce about when kids still communicated respectfully (via text message). Actor Joseph Gordon-Levitt introduces the album in a gruff, world-weary voice.

For all its strengths, Event II suffers from some of the very elements that make it so undeniably Deltron 3030. For an album that’s supposed to sound futuristic, nowhere do Jones or Nakamura push boundaries. This is a record we’ve heard before. With a few exceptions, Event II feels like a quite literal continuation of 3030 — a collection of excellent B-sides that retread much of what Deltron 3030 has already done.

While the album may not advance Deltron 3030’s sound much, that doesn’t mean it won’t be totally mind-bending for some eighteen-year-old getting high in a garage somewhere and discovering Del for the first time. Indeed, while both Jones and Nakamura said they wanted Event II to do their first album justice, it’s clear they were more worried about what their die-hard fans would think, not what the critics would have to say. Nakamura said fans can listen to the album critically or as background music: They might appreciate Jones’ witty asides or nod in agreement to the record’s political messages, or maybe they’ll just geek out to the imagery and sounds — an idea that both Nakamura and Jones seem to like.

Said Nakamura: “I hope some people are just like, ‘Dude! Spaceships!'”

Previous ArticleGot a Complaint or Comment About the 51 Bus Line? Come to These Meetings:

Next ArticleWednesday Must Reads: Obama to Nominate UC Berkeley Prof to Run the Fed; California’s Response to Obamacare Called “Phenomenal”