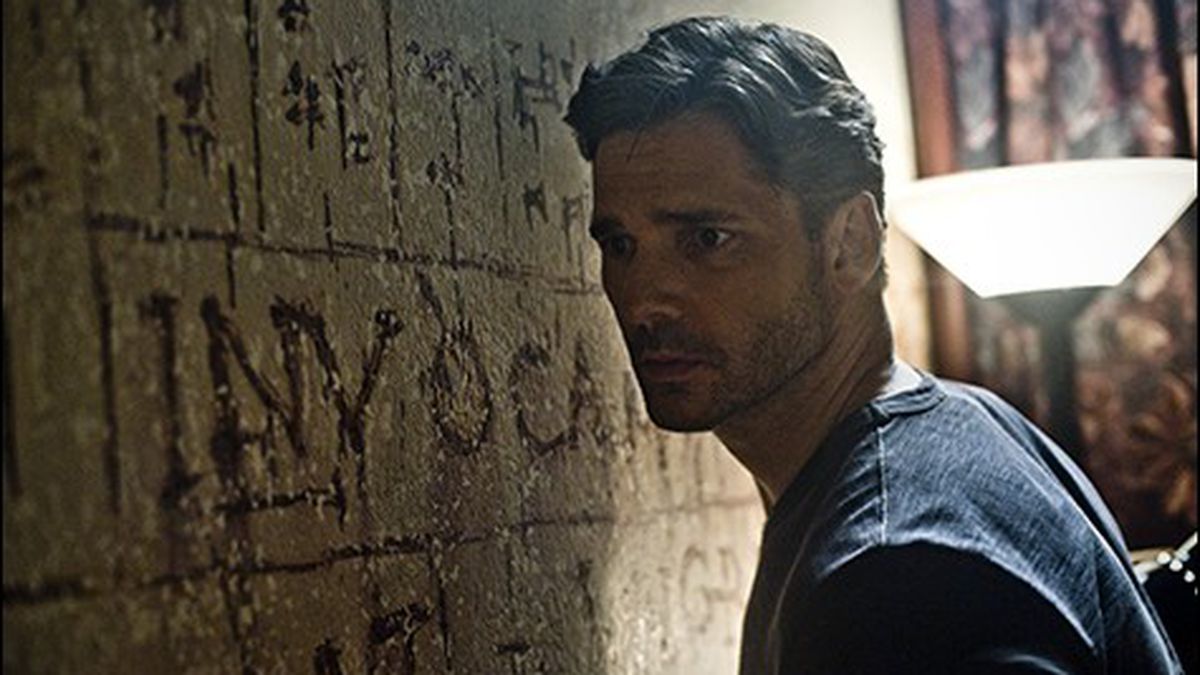 Deliver Us From Evil

Deliver Us From Evil has everything we need for a jim-dandy midsummer crime/horror shocker: rainy nights. An ancient Middle-Eastern curse. Deranged war veterans. Lots of frothing at the mouth. A toddler thrown into a lion’s den. A rotting corpse or two. Haunted houses. An oversupply of scary basements. A crucified cat. Several songs by The Doors, notably “People Are Strange.” A guilty cop teamed up with a guilty hippie priest. Exorcism in a police station. And so on. This movie appears to have everything going for it, so what went wrong?

Let’s examine it. Officer Ralph Sarchie (played by Eric Bana) is already feeling distraught from an encounter with a dead infant when he is called to corral a maniacal wife-beater, and subsequently to investigate the Bronx Zoo in the aftermath of a hysterical woman hurling her child into a lion’s den. While Sarchie is snooping around, someone lets the big cats loose and he barely escapes. Maybe it has to do with that grotesque hooded figure with the paintbrush. Perhaps there’s some special malevolence afoot in the Bronx. In two days, Sarchie has already met three people made up like Linda Blair in The Exorcist, with more on the way. Hmm. Could all this be related to the movie’s prologue, in which a squad of US troops in Iraq stumble into an underground crypt full of skulls and menacing graffiti?

Up steps Father Mendoza (Edgar Ramírez), a bearded guy in jeans who looks completely at home in a bar ordering whiskey. To Mendoza, the graffiti — written in Latin and ancient hieroglyphs — and the wave of Bronx pandemonium, suggest the devil at work. He manages to convince the skeptical, lapsed-Catholic Sarchie of what we’ve noticed right from the start, and soon we’re in belching-bass-voice-over land. Turns out both Sarchie and Mendoza harbor guilty feelings over past transgressions involving children and parenting — family man Sarchie gets especially upset when phantasms do the monster mash in his young daughter’s bedroom.

Durable leading man of action Bana (Munich, Lone Survivor) and the equally rugged Ramírez (Carlos the Jackal, Zero Dark Thirty) are at their best trading philosophical observations before we settle into the main event – a nutty ex-GI named Santino (English character actor Sean Harris), who is strapped to a chair in a holding cell. For spookmeister Scott Derrickson (Sinister, The Exorcism of Emily Rose), the exorcism itself is the only reason we’re here. Cue multitudes of stolen moments — from everything from Poltergeist to Se7en to this year’s silly Oculus to the various Exorcist sequels. Ever since William Friedkin pioneered the subgenre way back in 1973, it’s been the easiest thing in the world to portray an exorcism — just put an actor in grotesque makeup, nail them to a spot, surround them with pure hearts like Father Mendoza and Officer Sarchie, then turn the scene over to the special effects crew and the sound engineers.

If director Derrickson and his screenwriters – he and Paul Harris Boardman adapted their screenplay from the book by real-life evil-chaser and former NYPD roller Ralph Sarchie and the intriguingly named Lisa Collier Cool — were really interested in messing with people’s minds, they would get rid of the bulging veins and seven-channel yowls and create a character-based duel of wits, or some variation thereof. Deliver Us From Evil already possesses (if you’ll excuse the word) a pretty nifty pair of cross-bearers in Bana and Ramírez. As it is, the only thing slightly baffling about this very ordinary flick is Derrickson’s obvious fondness for the music of Jim Morrison. But it takes more than hideous faces and a playlist of Sixties rock tunes to break on through to the other side, dude.