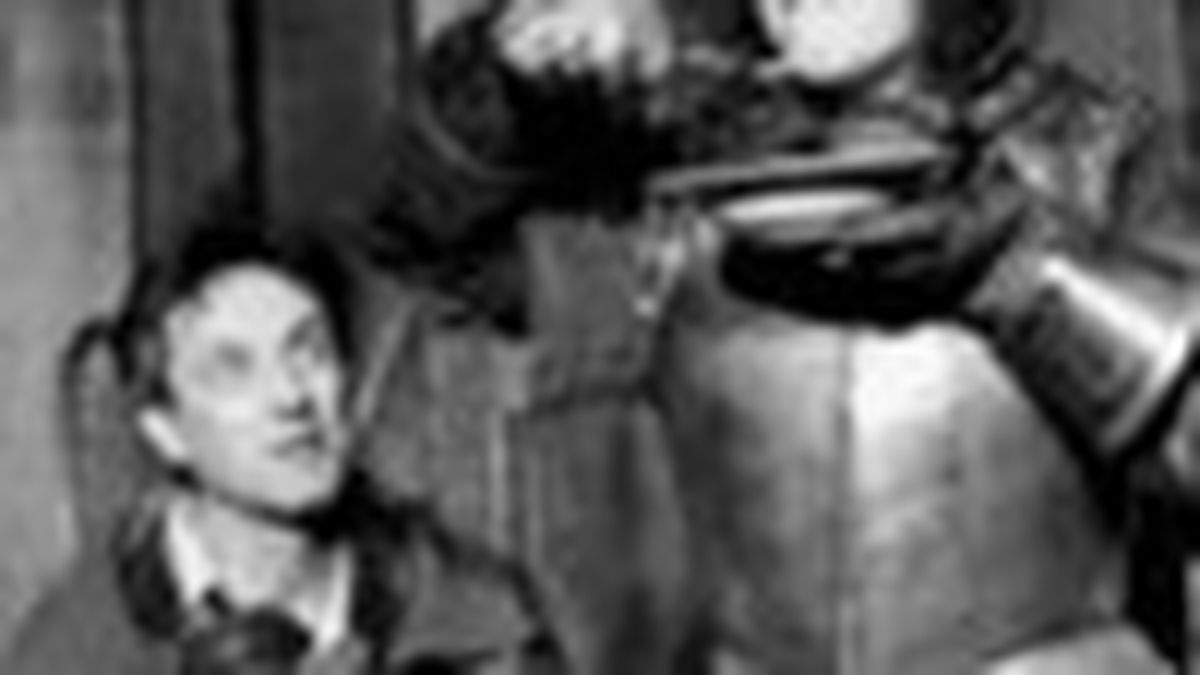 Meanwhile, just up the street at Aurora, a man makes a wish and his best friend disappears, replaced by a wiseass clown and Joan of Arc. Written by cartoonist Jules Feiffer, Knock Knock has been described as American Surrealism, which seems apt, since it doesn’t make a whole lot of linear-thinking-type sense. In fact, it seems designed to elude comprehension or even explanation, delighting instead in its own silliness. If you like wordplay — and I mean, really like it — then the verbal fencing in Knock Knock will send you home happy. If you like people falling over, the sounds of offstage cartoon fighting, and the random rubber chicken, this is a good show for that too.

Knock Knock presents two curmudgeonly friends, Abe and Cohn, who have been holed up in a mountain cabin (the wonderfully cluttered set designed by Richard Olmsted) together for twenty years, happily kibitzing at each other. But a difference in worldview leads to rash words. An invisible genie hears the friends, and grants Cohn (the amiably gruff Will Marchetti) three wishes. Things quickly get interesting as characters with bizarre demands appear and reappear, forcing Abe and Cohn to reconsider their behavior, friendship, and isolated lifestyle.

Where the Shotgun Players keep showing up in different places, Joan of Arc keeps showing up in the same place — this is her second appearance at Aurora this season, as one of Abe and Cohn’s unexpected and not entirely welcome guests. Played by Rachel Brown, Joan is preternaturally sweet, almost too delicate for the armor she bears. She stands in marked contrast to the other characters, her single-minded faith a foil to their linguistic antics. On the other end of the strange visitor spectrum is clown-trained Sara Moore, making her splashy East Bay debut as the fast-talking, slightly sinister Wiseman, who shows up as a judge, a cardsharp, and a UPS driver, among other things.

Dan Hiatt, who played the only character who got to have anything like a funny line a couple of years ago in Dinner with Friends at the Berkeley Rep, gets to cut loose here as Abe, a performance that reaches its highest point in a hilarious card game against Wiseman that brought spontaneous applause from the audience the night I went. Cohn seems to be the more practical of the two men, or at least he is until he falls for Joan of Arc when she appears at the door, voices in tow (Sara Moore again), on a holy mission to bring two of each kind to heaven in a fleet of spaceships. It seems two of each kind in this case includes schlepps, which is why she’s come for Abe and Cohn, but they prove to be much harder to pry loose from their hideaway than Joan anticipated, and she ends up moving in. Do they live happily ever after? You’ll just have to see for yourself.