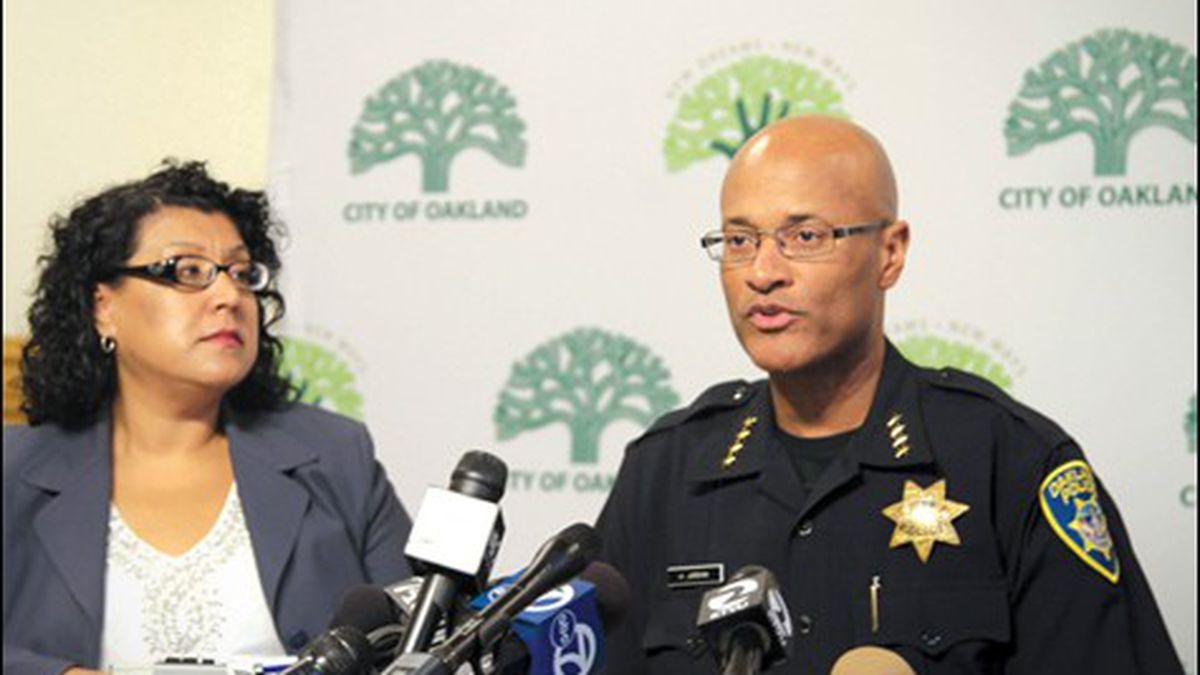 Oakland's city administrator has delayed a plan that is designed to increase the public's trust in the police department and help reduce crime at the same time.

Since 2006, Oakland has been working on a plan to civilianize the Oakland Police Department’s Internal Affairs Division by having non-sworn staffers hear and record residents’ complaints against police officers. The plan is designed to help increase the public’s trust in the department, while allowing OPD to focus its resources on reducing crime in the city. In 2011, Mayor Jean Quan and the city council passed a two-year budget that allocated $1,468,158 toward the proposal, which was supposed to be implemented in August 2012. But the city and OPD have yet to implement the plan, and as a result, sworn police officers who could be patrolling Oakland streets or investigating violent crimes are instead sitting at desk jobs in internal affairs.

However, the process of moving civilian employees into internal affairs and freeing up officers to do street work received a boost last week when the city council unanimously voted to instruct City Administrator Deanna Santana to complete the civilianization of internal affairs by October 15 — over objections from Santana and Mayor Jean Quan that they could not speed up the process.

At the April 16 council meeting, Santana presented a report that claimed the civilianization of internal affairs hasn’t happened because of the city’s funding crisis and OPD’s ongoing problems living up to court-mandated reforms. According to Santana’s report, the loss of $28 million in redevelopment funds in December 2011 threw Oakland’s finances into chaos and slashed the amount allocated for civilianization of internal affairs in half to $700,000.

The internal affairs process is at the heart of the consent decree, which was the result of The Riders scandal involving a group of rogue police officers in West Oakland. OPD also has recently backslid on federally mandated reforms to the internal affairs division.

The plan mandated by the council’s 2011-2013 budget involves the hiring of seven additional staff members for Oakland Citizen’s Police Review Board who would handle the intake of complaints for both internal affairs and the police review board. Under the plan, the review board will continue to conduct its investigations into complaints, while sworn OPD officers will conduct the official internal affairs investigations.

A critical difference between the police review board and internal affairs is the latter’s ability to impose discipline on officers who are found guilty of committing misconduct. Penalties can range from warnings and additional training to termination. By contrast, the police review board’s findings do not carry disciplinary weight, and the agency is so understaffed and underfunded that complaints often take more than a year to investigate.

Santana and Quan also asserted that an April 10 order by US Judge Thelton Henderson, who oversees Oakland’s federal reforms, mandates that the city seek the approval of newly appointed Compliance Director Thomas Frazier for the planned changes to internal affairs. “We cannot proceed with reorganization unless he has signed off on this approval,” said Santana.

The reorganization of internal affairs was further hampered by Santana’s decision to transfer control of OPD’s Inspector General’s Office — a quality-assurance role that conducts audits of existing police policies and records and has no disciplinary or policy-making power — from the police chief to her office. In June of last year, the city administrator earmarked $237,625 from the $700,000 budgeted for the civilianization of internal affairs to pay for two performance auditors and a manager for the Inspector General’s Office.

Santana and other city officials also claim that they must “meet and confer” with the Oakland Police Officers’ Association (OPOA) about the transfer of work from uniformed officers, who are members of the police union, to civilian personnel, who will not be. A legal opinion issued by City Attorney Barbara Parker cited the police union’s current contract with the city as justification for the consultation.

Santana also contended that Frazier should be a part of those meetings. “[Frazier] would like to have additional meetings, including with the OPOA, and we’ll consider whether to approve this initiative or not,” she said during the council meeting.

The civilianization of internal affairs was originally proposed by the police-watchdog group People United for a Better Life in Oakland, or PUEBLO. In 2001, PUEBLO and the ACLU of Northern California successfully sued Oakland to prevent the city from discussing changes to the Civilian Police Review Board with the police union in private meetings, and doggedly pushed the civilianization of internal affairs after the 2006 California Supreme Court ruling Copley v. San Diego severely weakened Oakland’s police review board and similar bodies throughout California (see “Deadly Secrets,” 10/12/11).

The Oakland police union also is a long-time opponent of the police review board. In 2004, the union sued to prevent the board from publishing the names of officers cited in complaints. Two years later, the Copley court decided that such identifying information must be kept confidential.

Last week, PUEBLO director Rashidah Grinage reminded Quan of her commitment to see through the civilianization of internal affairs. “Madam mayor, you made a commitment to us,” Grinage said at last week’s council meeting. “Remember, we have you on tape.” Grinage also strongly criticized Santana’s report, accusing the city administrator of giving “every reason under the sun for why this implementation hasn’t happened.” Regarding purported conflicts with the federal consent decree, also known as the Negotiated Settlement Agreement (NSA), Grinage pointed to a 2008 revision of it that allows for civilians with the police review board to take citizen complaints for internal affairs.

“Had there been any issue at any point in time from parties involved in the NSA, it would have been stopped in its tracks and not allowed to pass the council,” Grinage said. “As long as the standards of the NSA are met, no one cares who meets them.”

Jim Chanin, one of the attorneys involved in the consent decree, agreed with Grinage. “It’s not [Frazier]’s job to say what should be done with these various agencies, who they’re under, and how they should be managed by the city,” he said, adding that it was his understanding that Frazier is comfortable with the transfer of complaint intake to civilian positions.

The internal affairs issue also represented a rare moment of unity for the city council, a legislative body riven with internal strife and tension — evidenced that evening by Councilman Larry Reid and Desley Brooks railing against a report by City Auditor Courtney Ruby alleging that both councilmembers had illegally interfered with contract bids. Councilwoman Libby Schaaf noted that when the council approved the 2011 budget containing funds for the civilianization of internal affairs, every councilmember supported the proposal then, too.

Noel Gallo, chair of the public safety committee and an outspoken supporter of the Oakland Police Department, unequivocally supported setting a firm date for the civilianization of internal affairs. “It comes down to governance,” he said. “If we make a commitment, then we honor that commitment.”

Councilwoman Brooks, meanwhile, directly challenged Santana’s explanations for delaying the civilianization process. Noting that the changes to internal affairs were approved two years before Oakland had a compliance director for OPD, Brooks accused the city administrator of intentionally stalling the process. “We’ve done everything to delay something that … was put forth as a savings effort,” Brooks noted. The civilianization of internal affairs would save the city money, because it’s much cheaper to hire civilians than police officers to record citizen complaints.

Councilwoman Rebecca Kaplan said the lack of a firm timeline for civilianization was a “matter worthy of concern.” Keeping officers on desk jobs rather than shifting around existing resources and funds to get them back out on the street, said Kaplan, “directly impacts public safety resources we could be using to fight crime.”

A brother and sister, Deborah Houston and Tim Thomas, took the podium to relate their own negative experiences with the internal affairs process and support for moving complaint intake away from uniformed officers. Houston said the officer who heard her complaint “said that police officers don’t behave in that way, and that because my car was damaged, I should make a traffic report.” Houston also said the officer advised her against filing a complaint with the police review board, saying the civilian agency “would publish my phone number and I would get a lot of crank calls.”

Rather than hold officers accountable, Houston said her experience lead her to believe that the true intent of internal affairs is “to protect the other police, to keep things secret, to discourage complainants, or to confuse folks,” and that moving the accountability process away from fellow officers could improve transparency and improve the department’s relationships with the community.

Thomas, meanwhile, emphasized that community trust in the internal affairs process was crucial to improving public safety, and that the current practice of using police officers to hear complaints was discouraging many residents from filing them in the first place. “Folks are not buying that on the street,” said Thomas. He also lit into Santana for delaying the proposal’s implementation for several months. “Delays seem very commonplace in the City Administrator’s office, particularly around key issues of community concerns,” Thomas said.

The motion passed by the council requires the city administrator’s office to deliver a report to the Council’s Public Safety Committee every thirty days until the transition occurs on October 15 of this year.