.David Polka Processes a Life-Altering Accident in ‘Ballad of the Broken Body’

For his solo show at Betti Ono Gallery, the artist reflected on a dark period in his life and emerged with some of his most compelling work yet. 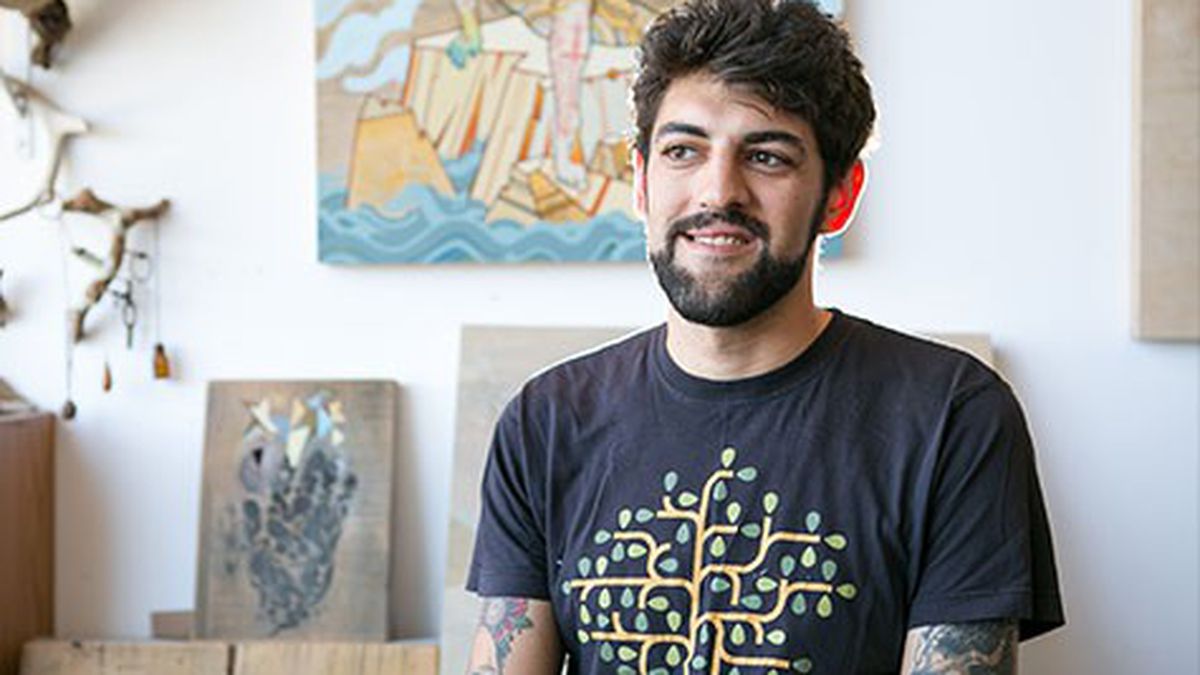 In the fall of 2011, David Polka moved to Oakland from Albuquerque, New Mexico to pursue his art career full-time. But three weeks after his arrival, his plans came to a sudden halt. A driver speeding through a red light hit him while he was riding his bike through an intersection. He blacked out on impact and awoke in Highland Hospital. He broke several bones in the crash — including his right shoulder, which left his painting arm impaired — and his medical bills totaled more than $100,000.

Though the accident was a hit-and-run, Polka was fortunate. Thanks to witnesses, the driver was arrested and her insurance covered most of his healthcare expenses. But though his physical injuries healed within a matter of months, the traumatic experience caused persistent psychological effects.

Polka’s journey to recovery is the primary inspiration behind his upcoming solo show, Ballad of the Broken Body, which opens on July 3 at Betti Ono Gallery (1427 Broadway Ave., Oakland). The exhibition features a collection of mixed-media paintings and installations that meditate on the detrimental effects that physical injuries can have on the psyche.

While pain has been a theme in Polka’s work during the past several years, Ballad of the Broken Body represents the first time he has directly addressed his personal experience. His paintings contain a cacophony of visual elements that speak to his physical and psychological transformation since the life-altering event. Recognizable human and animal figures unravel into splintered, abstract shapes. Polka, who is also a graphic designer and street artist, renders them in a flat, illustrative style that evokes tattoo designs and skateboard art — a nod to his early days in New Mexico’s countercultural scenes. Soft washes of pastel hues contrast with his bold line work. The juxtaposition imbues his compositions with an unexpected sense of fluidity.

When I met Polka in his Fruitvale studio approximately two weeks before the show, he explained how the imagery in his work relates to various aspects of his recovery. Repeating, shard-like prisms allude to his broken bones and the pieces of glass that were embedded under his skin when he rolled onto the driver’s windshield. Plumes of black pigment rise from many of his figures like evil spirits, illustrating his determination to let go of bitterness and grow from his experience.

During our interview, Polka frequently referenced the anger and frustration he felt in the months following the crash. After being discharged from the hospital, he seldom left his house except to go to physical therapy appointments. And with his right shoulder still in recovery, he couldn’t use art as a constructive outlet for his emotions. Though his physical injuries healed, his resentment toward the person who hit him festered.

“[I was] grappling with how someone could have such utter disregard for human life in general, and [my] life specifically,” he recalled, still visibly perturbed.

Because Polka lost consciousness during the crash, his inability to remember the events that took place still haunts him. And as a result of his eagerness to get back to work after being incapacitated for months after the incident, he never fully processed everything that happened. But creating new pieces for Ballad of the Broken Body has allowed him to parse through his experience and gain a newfound sense of closure.

“In a lot of ways, making art and putting it out in the world was a really cathartic thing that helped me move through [the crash],” he recalled. “But addressing it in bigger terms and really examining it wasn’t something I had thought about [until now].”

Polka’s first project after completing physical therapy in 2012 was a large-scale mural at the uptown gallery Classic Cars West, on which he collaborated with fellow artists Thomas Christopher Haag, Ernest Doty, ANEML, and ROAR. Regaining mobility in his shoulder motivated him to tackle large, physically demanding projects that he couldn’t take on while his bones were broken. Since then, his prominent murals across Oakland have earned him a following in the local street art scene. But because street art often prioritizes arresting visuals over more subtle emotional content, the vulnerability Polka displays in his latest show might surprise some of his fans. However, the act of finally addressing his trauma has pushed him to let go of expectations. In venturing into the darkness, he has emerged from this experience with some of his most honest and alluring work to date.