In a two-part show on gentrification, Random Parts in Oakland and Incline Gallery in San Francisco team up to bring awareness to the act of crossing the bay. 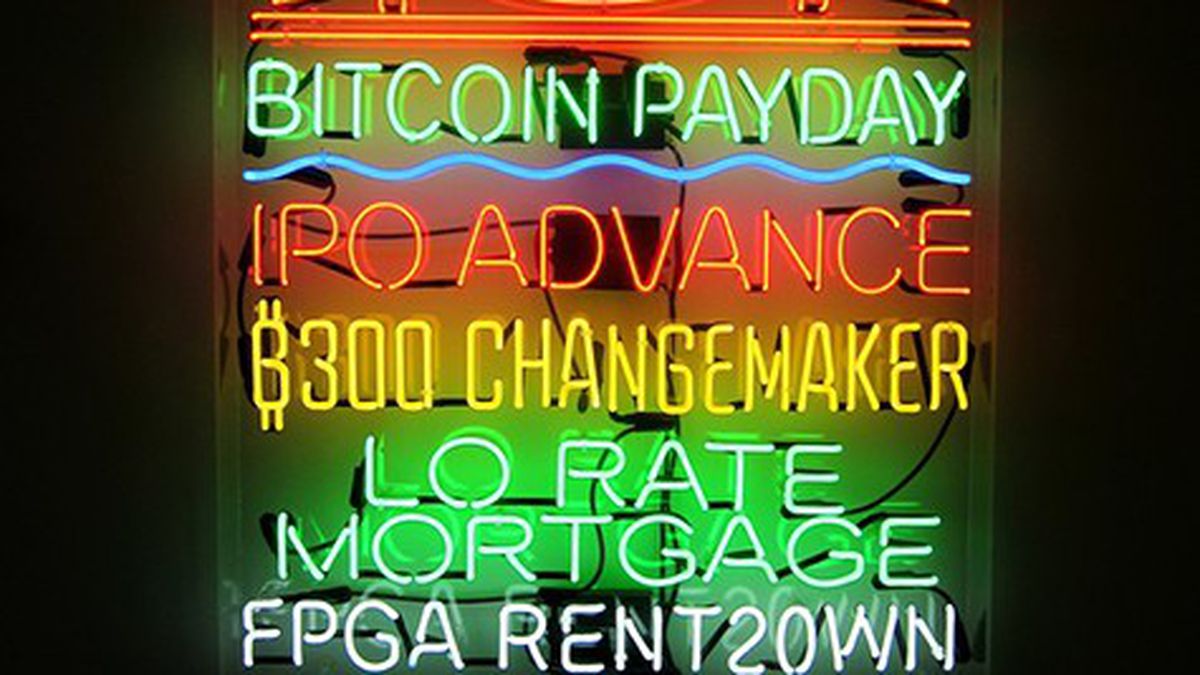 The current show inside Random Parts gallery (1206 13th Ave., Oakland) is like tangible poetry, articulated through mysterious objects and imagery. In it, Leslie Dreyer has immersed an iPhone in a jar of water and placed it near to an old, analog phone — the kind where you crank the number pad — with letters instead of numbers. It’s next to a series of photographs of San Francisco taken through Google Street View by the artist COLL.EO. Hanging over the window is Elizabeth Travelslight’s quilted “safety blanket,” which is made of Mylar and other materials used in surveillance technology. Digital tablets mounted on the wall display Eliza Barrios’ videos of Oakland streets superimposed with QR codes that lead to informational online resources. Adjacent, a neon sign by Tom Loughlin blares a cryptic critique: “Bitcoin Payday / IPO ADVANCE / 300 Changemaker / Lo Rate Mortgage / FPGA Rent2Own.”

The element that most legibly focuses the collection of works is a series of interactive data visualizations that are presented on an iPad and projected onto the wall. Created by the Anti-Eviction Mapping Project, an activist research group that tracks gentrification in the Bay Area, the visualizations show sites of development and displacement as glowing dots on familiar maps. With that, the pieces cohere into the Oakland half of The Dissidents, the Displaced, and the Outliers, a show about the intersection of gentrification and privacy concerns.

Curator Dorothy Santos, aside from being a critical new media whiz, serves as an executive staff member for the Bay Area Society for Art & Activism, through which she curates shows, this time in collaboration with The Electronic Frontier Foundation. Without ignoring the obvious connection between tech and gentrification — that of tech employees displacing San Francisco residents — Santos’ selections collectively go beyond that, speaking to the tangle of ways in which the loss of housing security corresponds with the loss of data security. While online privacy has become a troubling concern, maintaining physical privacy is also a struggle under the looming threat of homelessness and surveillance.

The other half of the show is housed at Incline Gallery in San Francisco, and features related works by the same artists. Presented this way, the conversation literally spans the bay. Incline is located at 766 Valencia Street, a portion of the Mission District that, in an interview, Santos suggested you could arguably refer to as “post-gentrification.” Random Parts, on the other hand, is tucked away in a residential neighborhood on a short block between International Boulevard and East 12th Avenue, still relatively untouched by the incoming migration to Oakland. Traveling between the two sites could be thought of as a grim journey through time, and anyone willing to fulfill the journey might ultimately find it to be the most thought-provoking aspect of the show.