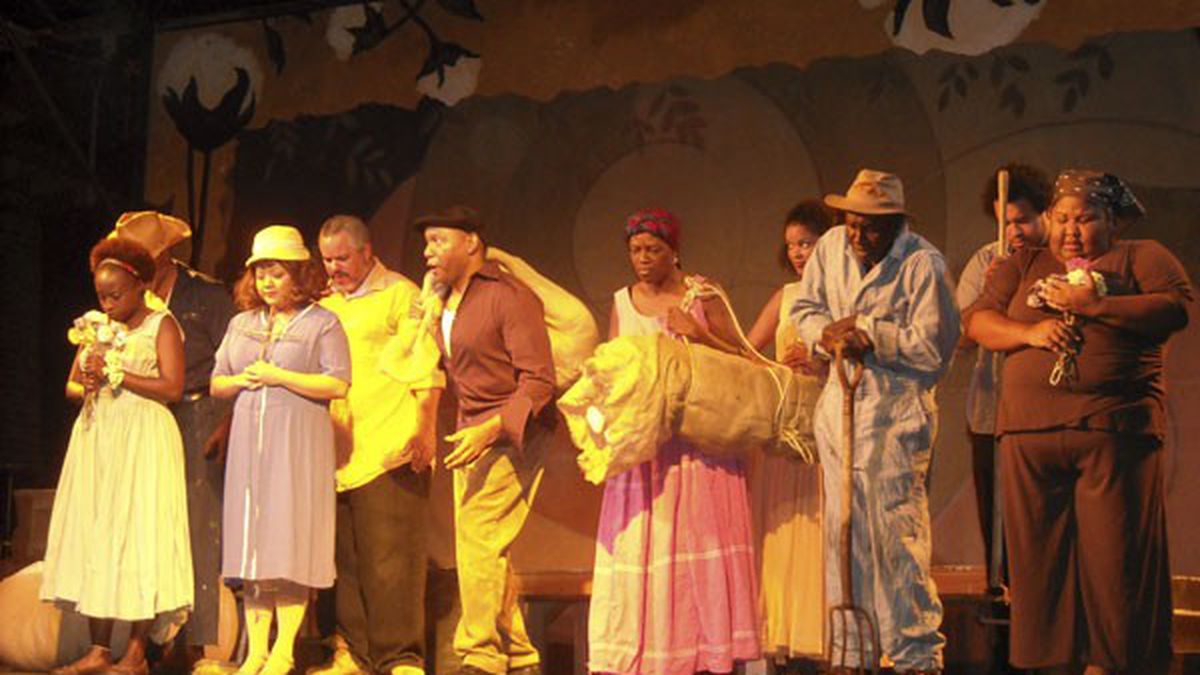 When you drop a pebble in a stream it forms concentric circles on
the surface of the water. You could say that image symbolizes change
— or, at the very least, disruption. Thus, it seems apropos that
Oakland Opera artistic director Tom Dean designed the set for Dark
River: The Fannie Lou Hamer Story with circles as a predominant
motif. (One need look no further than word “river” to know it’s a story
of movement and change.) In Dean’s set, brown spherical disks adorn a
transparent curtain that’s framed by cotton buds, all painted with
curlicue stems and flowers as thick and white as an antebellum
pinafore. Cotton represents a sordid past, and the curtain promises to
open up to something new — starting on the day that a black woman
from Mississippi decided to exercise her right to vote.

Though she wasn’t a central figure in the civil rights movement,
Hamer makes a perfect character for an opera. Born to sharecroppers,
Fanny Lou Hamer (née Townsend) was the youngest of twenty
children. She came up hard, forced to leave school after sixth grade
and condemned to a life in the fields. At a young age she married
fellow sharecropper Pap Hamer, moved to another plantation shack, and
started a family of her own. Hard-scrabble beginnings helped Hamer get
a thick skin (she’s the person responsible for such quotations as “I’m
sick and tired of being sick and tired,” a prominent refrain in Dark
River) and a tender heart. She was known for speaking plain and
constantly invoking the Bible. She was, in other words, the archetypal
heroine of melodrama — one who, by suffering, becomes
virtuous.

In this case, “melodrama” is a compliment. After all, what is opera
but “melos” (i.e., music) and “drama” at their most extreme? Dark
River starts off heavy, with the specter of Emmett Till (Hannefah
Hassan-Evans) dancing behind the curtain while the cast members emerge
with their pitchforks and rakes. They sing a haunting number about
justice and remembering the past, which closes on a jazz chord. Then
we’re instantly shuttled back to a 1920s-era cotton plantation, where
young Fannie Townsend (Bolanle Origunwa) plays patty cake with her
sisters under the watchful eye of her mother Lou Ella (Jeannine
Anderson). The narrative skips around a bit but mostly focuses on
Hamer’s activism in the 1960s, which began after she heard a sermon by
Reverend James Bevel urging African Americans to vote. Mesmerizing
soprano Raiña Simons stars as the adult Hamer.

Composer Mary D. Watkins and director Darryl V. Jones created
Dark River as an ensemble piece, though it features several
climactic moments of Simons singing by herself, often from a podium,
usually addressing other members of the Student Nonviolent Coordinating
Committee in Mississippi, always framed by cotton buds. Simons vivifies
the character, who apparently was a singer in her own right. She stares
unflinchingly at the white cops and racists who try to bring her down,
and at the Democrats who sneer when Hamer and fellow activists disrupt
their 1964 National Convention. Dark River reaches its peak when
Hamer delivers one of her most famous speeches to the Democratic
Convention’s Credentials Committee. “Is this America, the land of the
free, and the home of the brave?” she asks, hitting a long cadenza on
brave. “They burn us, they lynch us, they make our lives hell!” The
weird hell is a protracted high note, beautiful and bracing and
probably two octaves beyond the average singer’s range. At a recent
Sunday matinee, it drew an audible “All right, girl!” from the
audience.

But Simons stands in good company. Singer Jeanine Anderson, who
plays minor characters throughout the play but is well known for her
singing on local jazz projects, is also a phenomenal presence. She and
Simons both know how to manhandle this material, which is no easy feat.
But for a few upbeat gospel tunes that feature the whole chorus, most
of the songs sound through-composed (meaning nonsectional, with no
sing-songy melody to latch onto). Watkins’ music mixes jazz and blues
in a nontraditional way, often requiring singers to wrangle with
complex harmonies or chord tones. It takes a capable musician not only
to understand this stuff, but also to give it the emotional heft it
needs.

Oakland Opera Theater is a budget company whose members know how to
use resources. Their flagship venue, the Oakland Metro Operahouse,
includes a proscenium stage and a large floor space that’s subject to
endless reconfiguration. In this case, Dean had the audience flank both
sides of a long walkway, which served as an extension of the stage.
Music director Deirdre McClure stood in one wing, conducting her
six-piece orchestra (piano, strings, reeds, drums, and keyboard). A
second stage hung in the rafters just above the bar. Decked in wood
paneling, it served as the set for Fanny and Pap’s small plantation
home. Jones typically had multiple planes of action going at once, with
Emmett Till appearing in the background while the ensemble stood in
front.

That setup worked for a play that’s preoccupied with connecting
things — the personal to the political, the particular to the
general, the past to the future. Watkins chose to gloss over details of
Hamer’s personal life and focus instead on her activism, particularly
the events leading up to the 1964 Convention. Dark River
culminates in 1966, the year Hamer was asked to leave the SNCC. (In the
play, Hamer lost face because she favored integration over the
predominating view that whites should go back and educate their own
communities.) It’s a bold note for Watkins to end on, and one that she
manages to make hopeful. I’ll spare you the ending, but “hope” should
give a bit of a clue.

Best Movie Theater: A big-hearted big screen for B movies