The influential Oakland author of Ghost World fame talks about time in relation to his prolific career and new sci-fi graphic novel, Patience. 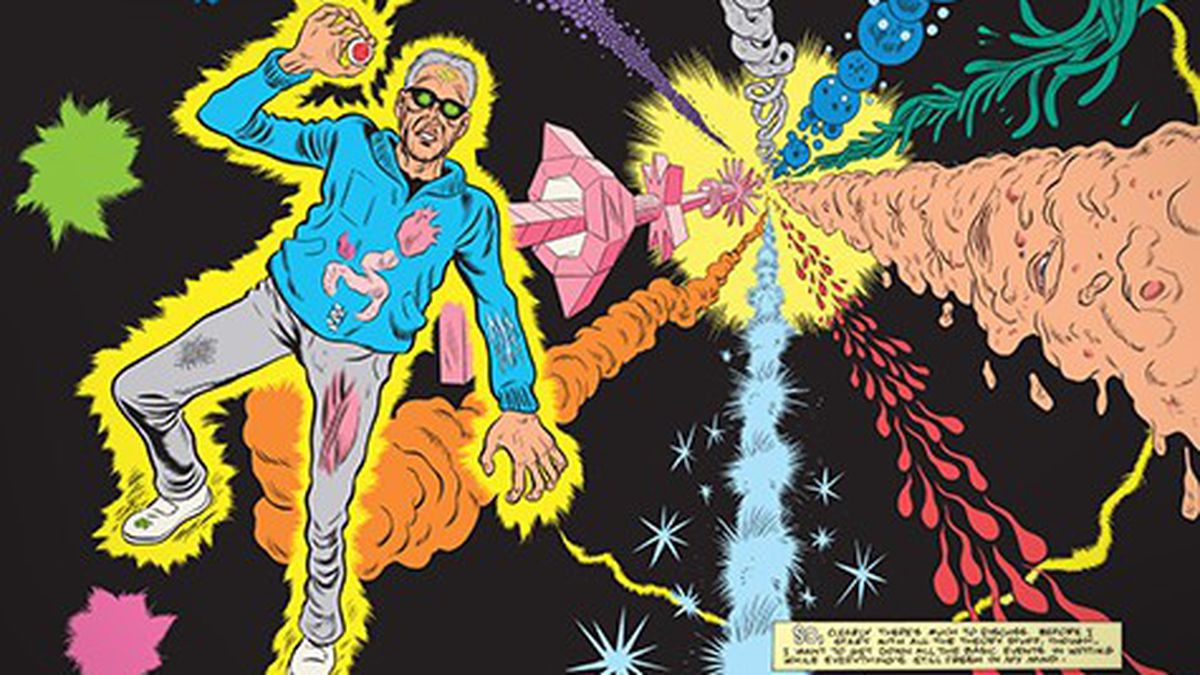 On a Sunday afternoon in 2010, the Oakland-based cartoonist Daniel Clowes wanted to watch a movie. But not just any movie. As he described it in a recent phone interview, he wanted to see one of “those weird science fiction movies” that they used to make in the Sixties and Seventies “that were sort of heady and cerebral,” like the Russian space station movie, Solaris, which probes ideas of memory, identity, and what it means to love someone, or The 10th Victim, a dystopian Italian film that mixes Pop Art decor with a plot centered on a televised assassination game. “I began thinking, ‘I wish there were more of those that I could rent,'” he said. “‘I guess I’ll do my own.'”

Five years later, Clowes emerged from his home studio with Patience. The sci-fi graphic novel (which comes out on March 21) is the latest in a career that includes numerous highly acclaimed graphic novels and accompanying screenplays, including Ghost World, which later earned him an Academy Award nomination for best adapted screenplay; Wilson, whose film adaptation starring Woody Harrelson and Laura Dern is slated for release this fall; and Mister Wonderful: A Love Story, which originally ran as a serial in The New York Times Magazine in 2007 and 2008.

Patience opens on Jack and Patience, a young, financially-stressed couple, as they stare at a home pregnancy test. The stick is positive. The couple is excited, but jittery with worries about the future, and, in Patience’s case, the past as well. She fears her earlier traumas and lousy family tree will invade her daughter’s life. A single, tragic moment obliterates these concerns and launches Jack onto a path of revenge and, eventually, time travel.

As a comic artist, Clowes is no stranger to how time can move in weird ways. “The process of being an artist is very time travel-y because you go into this kind of void while working on your book and then the next thing you know, it’s five years later,” he said. The years it took to create a single comic used to drive him crazy. He was once in a bookstore shortly after the release of a comic that he had worked on for over a year. “I saw a guy take it off the shelf and read the entire thing in line. I thought of all I had been through in that year, and here a guy read it in fifteen minutes. It was really hard for me to accept that,” he said.

It’s easy to see a similarity between Clowes’ creative process and his male protagonist’s time-bending journey. Both men are tenacious in their efforts to create worlds that they wished existed — albeit Clowes’ work is safely confined to his drawing board while Jack rips himself through the fabric of time to right history’s wrongs. The time travel scenes in Patience are some of the most visually visceral moments of the book. In one, Jack’s skull explodes like a firecracker. Yellow shards of his body float away like confetti above a fleshy pink tree. In another, a nude, rough-hewn claylike version of himself lumbers through yellow intestinal shapes, wrapped around geometric corridors in space.

Other reviewers have likened these surreal shape-and-time-shifting spreads to the hyper-active work that influential comic book artists Jack Kirby and Steve Ditko created in The Fantastic Four, Strange Tales, and other comics for DC and Marvel. Although Clowes said he was inspired by artists like Kirby, his real inspiration came from misremembering their work. “I always imagine that Jack Kirby or somebody like that drew these huge visions where you can see behind the fabric of time,” he said. “And then you dig out your comics and try to find those things, and they don’t exist.” For Clowes, these faulty memories, “when the synapses in your brain are connecting in an odd way,” are an exciting part of the artistic process. “You make these correlations between things ­­where you can’t even imagine what the connection is, and yet somehow it’s there on some deep level,” he said. “I was almost trying to draw that into the story in the way those crazy psychedelic images look, the idea of these intersecting thoughts and memories and impulses.”

Along with the book’s phantasmagorical passages, scenes grounded in clear, specific memories play with the idea that we’re each an accumulation of events, choices, and random moments. In one, Jack visits his childhood neighborhood. As he walks down a snowy street, he thinks, “It’s crazy how it all comes back, all the little bullshit things you forget about. The shapes made by the electrical wires and the way the air smells … it’s all there in the back of your brain.” Later in the book, he realizes that “… every moment … [is] as hospitable to scrutiny as the last inning of a tied world series or the hair fibers from an unsolved kidnapping … .”

At least one concrete event from Clowes’ past informed the writing of Patience as well. In 2012, the Oakland Museum of California organized the exhibition, Modern Cartoonist: The Art of Daniel Clowes. In preparation for the show, Clowes had to dig through decades of old work that he usually prefers to keep hidden in his closet. “It was very much like having this dialogue with an earlier version of myself that I didn’t really recognize. I could see the failings and the sadnesses and the things that I wasn’t aware of at the time,” said Clowes. “It’s like if we have patience, we’re all time travelers. If we wait long enough, we’ve done it.”