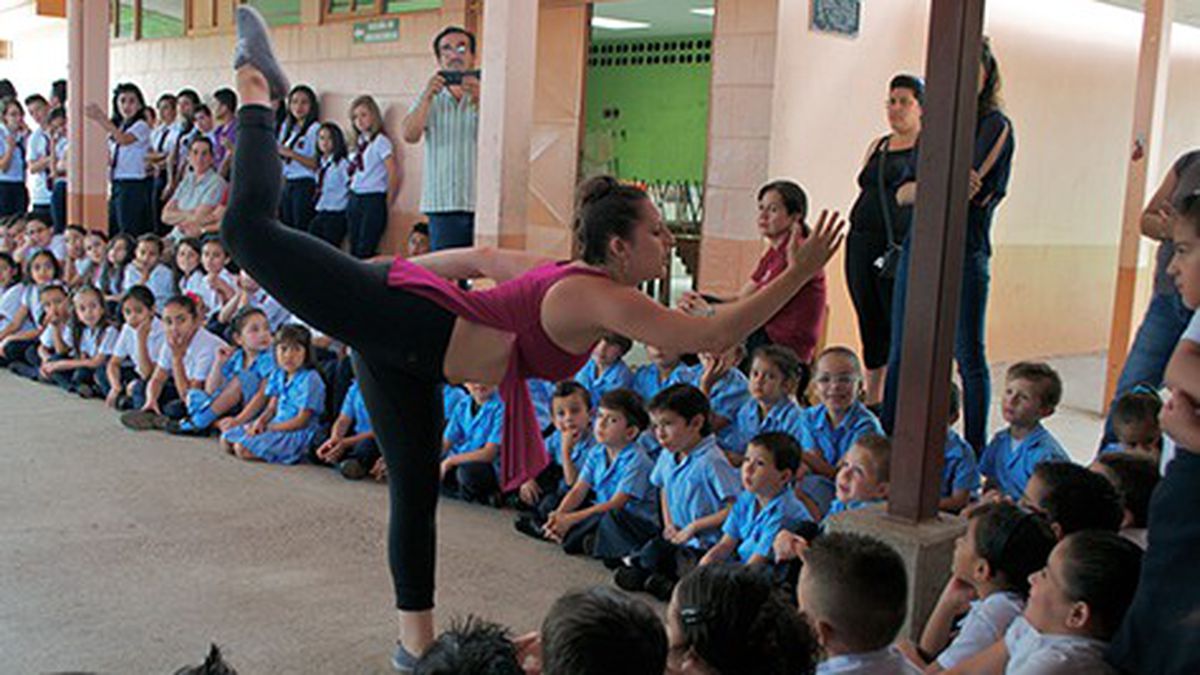 Juntos dance collective is based in Oakland, but performers hail from top dance schools across the country, and the performances take place in South American countries.

Joanna Poz-Molesky started putting on dance performances when she was in the third grade. Every Saturday, she and her friends would put on a show for their parents at her home in Berkeley. By the time she was in seventh grade, she founded a dance studio called En Pointe, and named herself the director at just twelve years old.

But that wasn’t enough for the audaciously ambitious middle-schooler, who wanted to go international. She dreamed of taking the company to Guatemala, where her father is from, but she settled on Mexico because it was more realistic. At sixteen, she took her dance group on a ten-day trip that included two full-scale performances. The crowds were an eclectic collection of American tourists, street vendors, wealthy Mexican families, students, and, of course, dancers. “Bringing all those people together through that performance is really what hit it for me and helped me understand that art is important,” she recalled in an interview.

After six years of directing En Pointe, Poz-Molesky decided she would pass it on in order to focus on her dancing at the prestigious Ailey School in Manhattan. But after a year in the intensive program, she started feeling the itch to bring her practice abroad again. She remembered an orphanage that they had visited during her last trip to Mexico, and couldn’t stop thinking about how many people pass through those children’s lives. She thought if she could teach them how to dance, at least her visit would leave them with something to grow.

In 2008, Poz-Molesky founded her second dance studio, Juntos Collective. The next year, she brought twelve dancers from the Ailey School, Juilliard, and SUNY Purchase to central Mexico for two weeks of performances and intercultural exchange. Since then, student engagement has expanded to the LINES Ballet BFA at Dominican University and the Boston Conservatory. And the performances abroad have expanded to Guatemala, Costa Rica, and Nicaragua. Poz-Molesky leads three trips a year, bringing groups of about ten dancers to small towns in these countries to perform and teach in hospitals, orphanages, public schools, and dance studios — at which they also exchange workshops with local dance groups.

The American participants are chosen based on the extent to which their personal goals match up with Juntos’: to challenge personal boundaries and build cross-cultural connections with lasting effects. The collective is a nonprofit funded by grants and donors, but each student participant pays tuition to fund their trip. For most, the price is worth it to be able to bring socially engaged meaning to their practice and explore the distances that dance can take them.

Although Poz-Molesky lives in Oakland, it’s pretty rare that Juntos will perform in the Bay Area, because the participants are dispersed across the country. But on Friday, November 21 and Sunday, November 23, dancers from Boston, New York, Guatemala, and San Francisco will be coming together at Classic Cars West (411 26th St., Oakland) to perform for Juntos’ annual fundraiser. Noche Unida will take place on Friday, and will include dinner and drinks, performances, and presentations by Juntos dancers, and an optional group salsa dance lesson. On Sunday, Juntos presents Collections, a series of eight short performances that demonstrate its most recent choreography and reflect experiences that the dancers have had abroad.