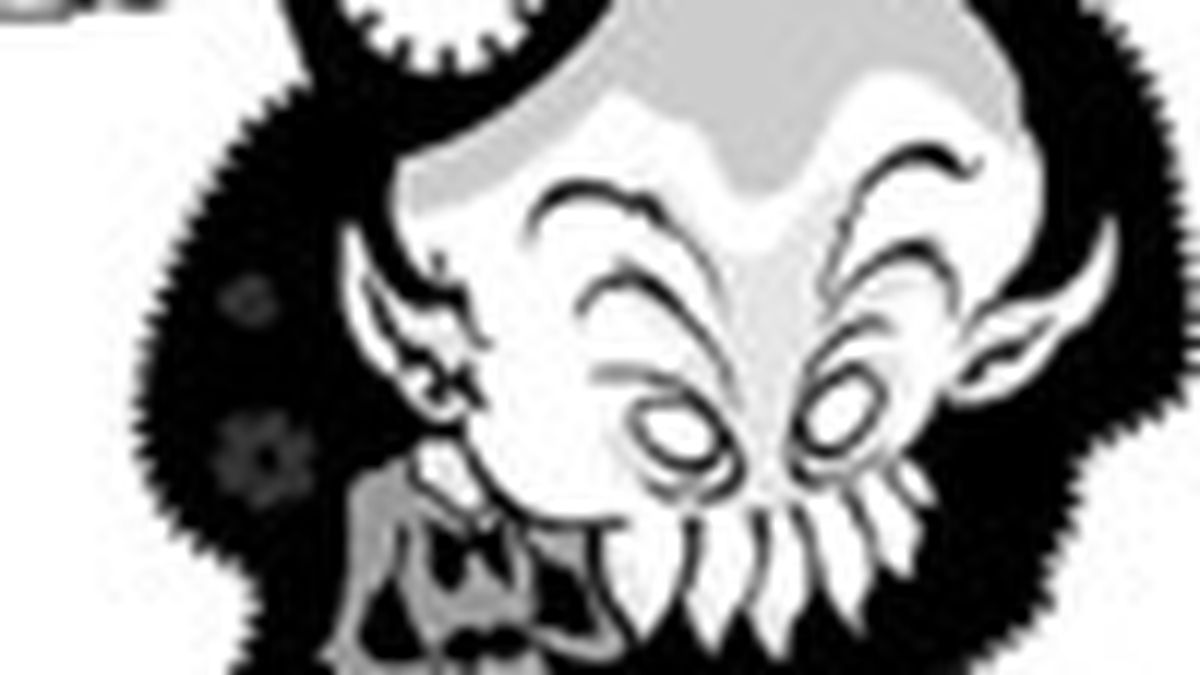 Good news. The great mysteries of life have been solved, like that perennial — some would say clichéd — question about the missing sock from the dryer, or why it rains the day you forget your umbrella, or how Tom Arnold ever had a career. It’s the Machine Elves. They did it. They exist in another dimension and are playful scamps that bounce around in a permanent state of irony.

But get this, people: Unlike the elusive incubus or the brattish poltergeist, we can actually go to the land of the Machine Elves and hang with them. You can do so, it is said, by taking the psychedelic drug DMT, short for dimethyltryptamine. Hundreds of people who have taken this drug report being stuck in another dimension wholly ruled by idiosyncrasy and these little guys, who bounce off of you impishly and put you in a giant playpen where you can be carefully coddled and observed. Sure, a few drug-takers have reported things like being anally raped by a quartet of wheeler-dealer crocodiles, or falling into the mouth of a gigantic purple lion whose teeth were the size of mountains, but these reports are few and far between.

DMT already exists in our bodies, and it apparently floods our brains when we die, causing those calming there-and-back experiences we’ve all heard about. It also exists in many plants, so naturally someone was smart enough to figure out how to smoke the shit. Most everyone who ingests it has the same general experience: They leave their bodies for anywhere from five to fifteen minutes (which, of course, feels like about twenty years) and are zipped into another world that is about thirty times as intense as any acid trip they’ve ever been on. A couple of people describe their trips as like being in a Fabergé egg factory, with the elves gleefully assembling the porcelain art pieces from every molecule of your being and experiences and then presenting them as little gifts to you. Here’s what one user said on a DMT fan site: “I cannot emphasize enough the catapulting, titanic motions of this iridescent zigzag bottle rocket, this nuanced, whittling circus of form, this Brobdingnagian roller-coaster safari across the jeweled plains of wonderland, straining the limits of the knowable.”

Alex Grey would agree. He’s been using drugs — primarily LSD — for decades. He says they have helped him reach the portals of perception and understanding that most of us yearn for. Grey is well known for his art: full-color, loud representations of the body with all the myriad eyeballs, cosmic latticework, and trippy Escher-like symmetry we’ve come to expect from psychedelic artists. Currently Tool is using blown-up versions of some of his paintings as concert backdrops, and Nirvana used one for the inner sleeve of In Utero. And man, is Grey down with DMT. You don’t need drugs to reach this inner world, he would argue, but it cain’t hurt. “Many artists have done it on the natch and through dreams,” he says. “But it is true that [drugs do] give one access to that inner dimension.”

Not that he discounts biology. In fact, as is apparent in Grey’s work, the divine and the biological cannot be separated. But what about the argument that drugs like LSD only give people the delusion that they are accessing another dimension, when in fact the Machine Elves, or whatever else, are just the result of chemical reactions in our brain? Say it ain’t so! “I’d say that flattens out the idea of what we are as human beings,” says Grey. “If we deny that there are dimensions, then by the same logic one could say that our entire experience of our life is just a chemical reaction in our brain. Because that’s all we have: chemical reactions in our brains that we can measure. But there is actually an entire world of meaning and consciousness and inner imagery.”

The artist’s big interest is creativity as a spiritual practice. That, friends, is the godhead. Grey has spent the whole week teaching at the University of Creation Spirituality in Oakland, and this Friday will be having a dialogue about the divinity of creativity with the school’s founder and all-around mystic Christian spokesman Matthew Fox. “Art has a spiritual function for people when they allow it to, which Matt has sort of spread the word about — the connection with the whole path of the artist and the notion of spiritual creativity,” says Grey.

Which brings us to rock ‘n’ roll. If art and music are paths to the spirit, what was going on with the Butthole Surfers? Once again, we need look no further than the Machine Elves. If humor, drugs, and spirit are so undeniably mixed, then surely this band from Texas is a prophet? “I think musicians of all kinds, and rock too, are dealing with the sadder side of life,” says Fox from his Oakland office. “You know what I think they are looking for most? Grieving. Grief is both anger and sorrow. Really, [rock music] is wailing, isn’t it? It’s a scream, a primal scream.”

So, was Johnny Thunders grieving? It’s probably not a coincidence that rock ‘n’ roll goes so handily with drugs, if both are supposedly conduits to our “lost mystical childhood.” This is what Fox asserts: that as children we are very mystical but then we lose that at adolescence. Fox was, in his own words, “lucky” enough to have polio. The disease left him bedridden and contemplative, with regular visits from a wise elder who later became a Trappist monk. But Matt — don’t you think that if you’d been laid up in the late ’70s, you might have done what other wayward or confused youth did, and drifted toward punk rock instead?

“Haha!” he laughs. “Well, let me put it this way. It’s what the mystics called via negativa. The experiences of being and suffering and darkness of the soul and depression can be grist for spiritual experience. … It took me to an edge. I think that rockers, too, are trying to reach their own rituals of grief.”

There you have it. Matthew Fox, slam dancer.

But Fox does delve deeply into another sea of youthful debauchery — raves — except that the ones he hosts are called Techno Cosmic Masses, drug-free dance fests with DJs and lights and flame twirlers and white pythons. Fox, too, agrees that drugs are one way to reach the cosmic, but he doesn’t recommend them. He thinks there are many other ways to party with the Elves without ingesting a foreign substance, and he touts his raves as transcendent prayer revivals. “It’s an effort to deconstruct the liturgy of the West,” he says, “but deconstruct it using the genius of the rave, which is to say dancing instead of sitting on benches to pray.”

At the Cosmic Masses, Fox’s ravers wail to purge grief. But man, it still seems like a lot more fun to purge grief by seeing AC/DC. Are the bands who just sing about gettin’ some and gettin’ drunk also tapping into the great Kundalini Express of creativity? “Oh, absolutely,” says Grey. “I think the creative spirit has to embrace all the different modes of awareness, and that includes complete debauchery.”

Finally, a spiritual path we can all embrace.

Public Service Announcement: October 22 Was the Last Day to Register...