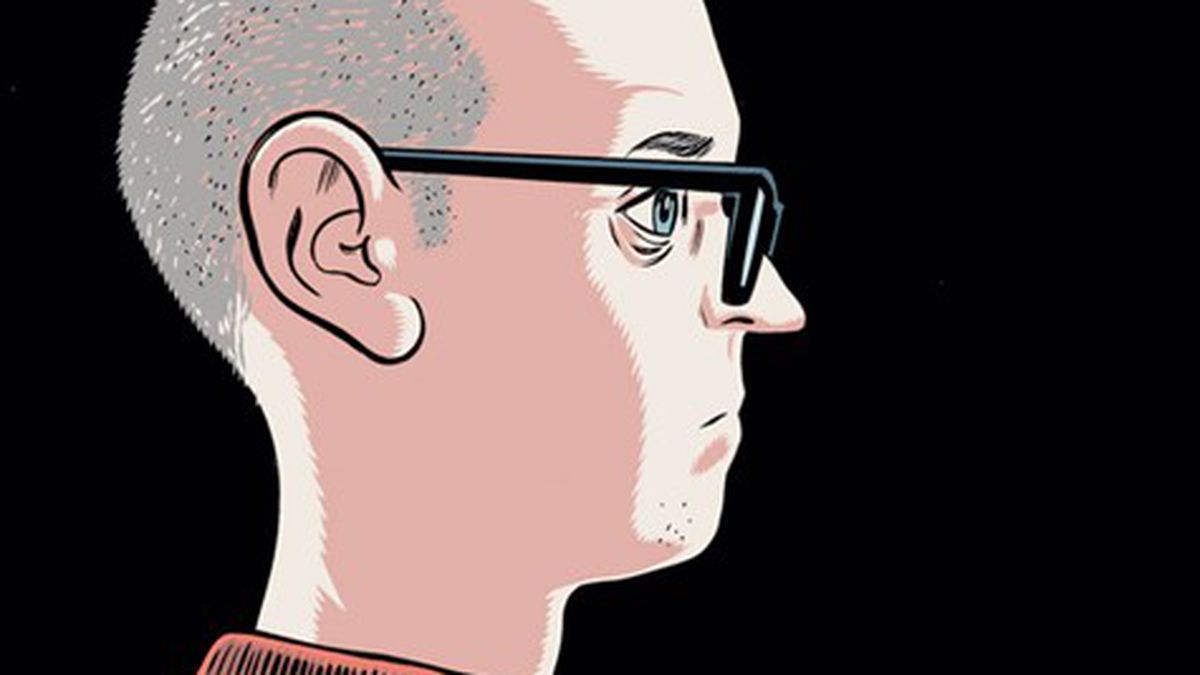 The title character of Dan Clowes‘ new graphic novel Wilson is the kind of guy who sits down across from you at cafe tables and asks how you’re doing, what you’re working on, and whether you have kids. Answer him in monosyllables and he just keeps asking. Ignore him and he cusses you out.

“I’m a little surprised at how often the term ‘misanthrope’ comes up” in discussions of the book, said Clowes, who will be at Diesel (5433 College Ave., Oakland) on Thursday, June 3. “While Wilson holds his fellow man and woman to an impossibly high standard, he seems to have a constant, unfulfilled faith that each person he meets will live up to those ideals.” Badmouthing passersby for not admiring his dog, imagining his dying father calling him a miserable slob, “he’s like the opposite of a misanthrope in a way: someone with an inherent faith that each human interaction will lead to a satisfying connection despite an overwhelming history of failure and isolation,” Clowes said.

Jobless, desperately lonely, awash in midlife regrets, Wilson lives in Oakland — as does Clowes. One scene finds the shaggy, shabby character observing Lake Merritt from atop a concrete piling spray-painted with the words “CRACK,” “KUNT,” “OAKTOWN,” and “KILL.” In another, he stares down from the middle of the street at a familiar palm-dotted cityscape.

“How did I ever wind up here? Oakland, California, for God’s sake,” Wilson muses. “Pretty fucking random. I always hated the Oakland A’s when I was a kid. … What a bunch of assholes. And yet here I am. It’s kind of a beautiful place, I have to admit. Decent folks … a good, honest American city, y’know? Hey, what’s he doing?” Riveted, Wilson peers into the distance. We don’t see what he sees, but he tells us: It’s a homeless man defecating “right on the goddamn sidewalk.”

Not that Wilson himself doesn’t engage in excretory exploits of his own. In one scene, we see him anonymously mailing a brown-paper-wrapped box of dog feces to his in-laws. It’s a typical gesture for a character who’s pretty hard to love.

“A few years ago, I had a very scary heart operation and found myself facing the void in a way I hadn’t planned on for several decades,” Clowes said. “Emerging miraculously from this horror, saved by the amazing achievements of my fellow man — in this case, having nothing to do with microprocessors or medicine, but with an ingenious and beautiful origami-like reshaping of the heart — I found myself with a new and surprising perspective on my life. This, coupled with the death of my father and the birth of my son, were the elements from which Wilson was born. I felt as though I was able to view the world through the horrific vantage of an eighty-year-old and learned what I really felt about things: a series of shocking and, at times, oddly reassuring revelations.” 7 p.m., free. DieselBookstore.com