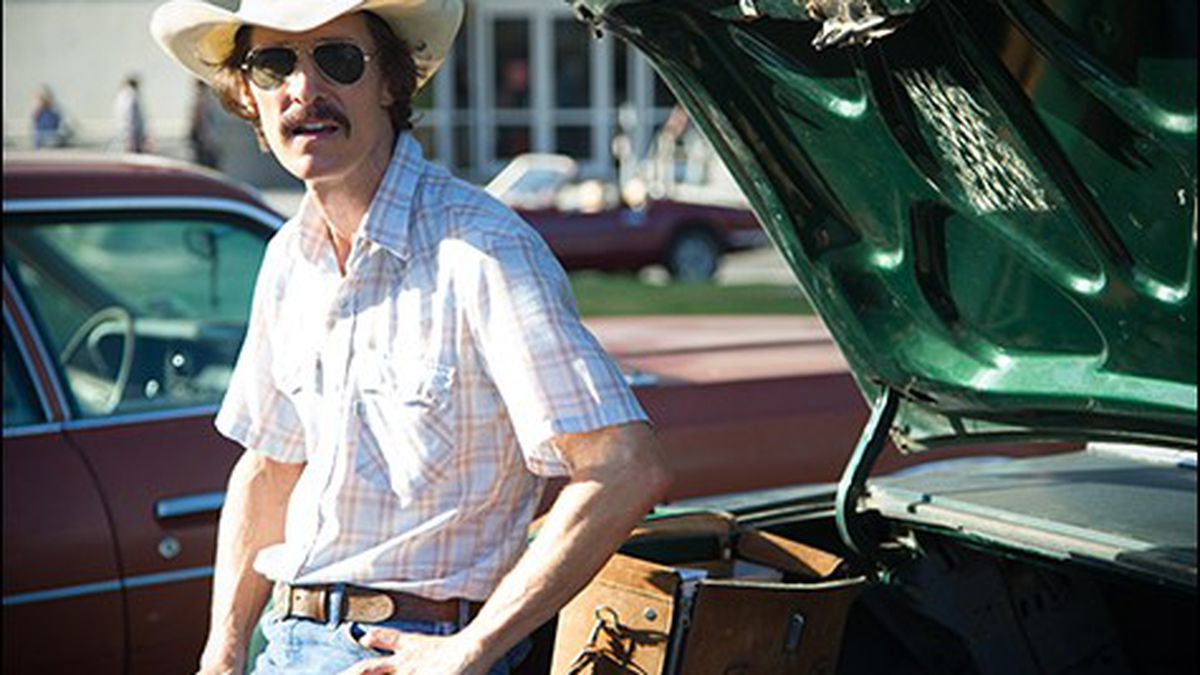 Matthew McConaughey is on fire. The boy is running faster than a scalded dog. In the past two and a half years he’s acted in seven feature-length films — including some of the best roles of his career — and three TV series, with The Wolf of Wall Street still to play theaters this year. Dallas Buyers Club, yet another of the actor’s long, tall Texas tales, may be the friskiest of the bunch.

As directed by Jean-Marc Vallée from a screenplay by Craig Borten and Melisa Wallack, the basically true story of Ron Woodroof is one of those only-in-America yarns that’s certain to baffle and titillate world audiences as well as the homegrown “compassion crowd.” A hard-living rodeo cowboy gets AIDS in 1985, when the common perception was that it was an affliction that happened to gay men only. And then, instead of going away peacefully and dying, he raises hell until he changes the rules governing HIV-positive patients and the way they obtain medications.

At first we’re not entirely sure that’s McConaughey up there on the screen, rutting with a couple of rodeo groupies underneath the grandstand. Did he accidentally misplace half his body weight? Oil field electrician/stunt rider/homophobe/good-ol’ boy Woodroof has the gaunt-but-wiry appearance of a dude who shoots crystal meth (or crack, or both) and chases it with Jack Daniel’s and a blunt while doing threesomes with hookers in a crappy motel room. He looks like he could blow away in a strong wind, but watch out — he’d climb up on your back like you were a brahma bull and knife you in the kidneys if you were to tell him he had a fag’s disease. “High-voltage self-destructive peckerwood” just about describes him. So does “full-blown AIDS patient,” when he receives the official diagnosis from his physician, Dr. Eve Saks (Jennifer Garner).

The drugs she prescribes him don’t help, so quick as a wink, Ron invents the modern concept of the “drug cocktail” for AIDS sufferers, in league with his new transgender friend Rayon (Jared Leto in a magnetic performance) and doctors in Mexico and Japan, and no thanks to the goons from the FDA, who see him as a screwy lowlife dope smuggler upsetting the marketing strategies of the Big Pharma corporations who want the AIDS field for themselves. Ron and Rayon set up the titular buyers’ club drugstore in a motel room, where patients can get miracle meds like Interferon — membership is $400 for a month’s supply. Ron gets busted many times, but he’s on a mission. He discovers another side of life and alters his point of view. He also ditches cocaine and whiskey for non-processed foods and exotic natural compounds.

If it occurs to you that McConaughey’s grandstand performance and the misunderstood-AIDS-patients subject matter might in fact be a calculated try for year-end awards, you could be onto something, podner. Movies about saintly rednecks always seem to pop up about this time of year, and Leto’s tragicomic relief matches up nicely with McConaughey’s hyperactivity. Dallas Buyers Club puts the star of Killer Joe, Mud, and Magic Mike through more changes than just about anything he’s done before. If McConaughey stopped working this afternoon (Why not? How does he find time to sleep?), his Ron Woodroof would make the top of his highlight reel.