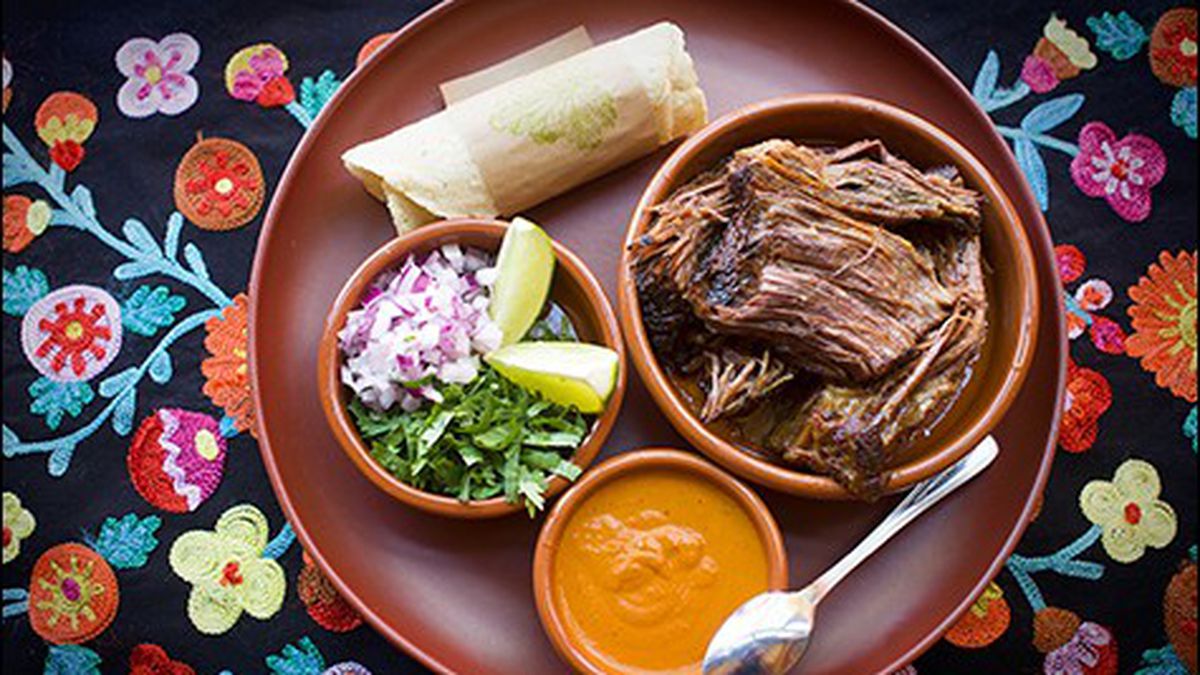 The most notable Mexican restaurant to open in Berkeley this year isn’t located in any of the city’s usual dining hubs, but rather a corner of South Berkeley that’s better known for poetry readings and social justice rallies. Now, thanks to Los Cilantros, you can add a few items to that list: excellent handmade tortillas, hard-to-find masa-based antojitos, and slow-cooked barbacoa available six days a week.

Tucked inside La Peña Cultural Center, the restaurant is a labor of love for chef-owner Dilsa Lugo, a native of Cuernavaca, the capital of the Mexican state of Morelos. Lugo moved to Berkeley in 2003 and, dissatisfied with the Mexican food options, decided she wanted to start her own business. La Cocina, the San Francisco-based kitchen incubator, helped Lugo set up a catering company, and what followed was a six-year training period for learning how to run her own restaurant. Lugo landed high-profile catering gigs, an internship at San Francisco’s A16, and, most recently, a sous chef job at Copita, a high-end Mexican restaurant in Sausalito. Now, finally, she has a place of her own: A little over two months ago, Lugo took over the cafe space at La Peña, offering breakfast and lunch six days a week.

Los Cilantros is the latest in a long line of progressive-minded Mexican eateries in the Bay Area that claim to serve authentic recipes while showcasing sustainably sourced meats and local, seasonal produce.

Los Cilantros is, in fact, more low-key about its slow-food pedigree than most of its Cal-Mex brethren: Lugo uses Niman Ranch meats and Mary’s free-range chicken and gets most of her produce from local farms — but doesn’t toot her horn about that fact on the menu. Prices are higher than your typical corner taqueria, but aren’t by any means exorbitant.

Los Cilantros is mostly a showcase for family recipes and dishes traditional to the Cuernavaca area, with a smattering of taqueria standards and specialties from other regions.

Lugo cooks a mean breakfast, and it’s available until 2 p.m. (While any number of places in the East Bay can serve you a decent taco, reliable Mexican breakfast joints are harder to come by.) The menu changes frequently, but the best breakfast dishes tended to be the masa-based items, of which the most interesting, and delicious, were the quesadillas estilo Tres Marias — prepared in the way that’s typical in Tres Marias, a small, picturesque town located between Cuernavaca and Mexico City. Corn tortillas are topped with requesón (Mexico’s version of ricotta), folded to form little cheese-filled pockets, and then fried. These crispy vegetarian delights were topped with sour cream and crumbled queso fresco, with a side of the best roasted-tomato salsa I’ve had in months — bright, garlicky, and fiery.

An order of tlacoyitos, another regional specialty, turned out to be three torpedo-shaped blue-corn masa cakes that had been stuffed with requesón and epazote (a musky, mint-like herb) and griddled until their edges crisped. These, too, were topped with queso fresco and sour cream, plus a streak of smoky guajillo-pepper salsa — another tasty combination.

Los Cilantros also serves a damn satisfying version of chilaquiles verdes. The salsa-drenched chips struck just the right balance between sog and crunch, and while the tomatillo salsa wasn’t especially spicy, the heat level was appropriate for breakfast. This was a wet, sloppy affair, accented by soupy black beans, and the occasional bite of raw red onion. The inclusion of over-easy eggs (two for an extra $2) and cool chunks of queso fresco made all the difference.

My favorite of the heartier entrées was the barbacoa, which is available daily. Lugo wraps marinated beef chuck roast in banana leaves and slow-roasts it over many hours, making for a well-spiced meat that has a lush fattiness and a nicely charred crust. This is served with fresh tortillas and an habanero salsa thickened with ground almonds, so you can make your own tacos. Lugo plans to add a version made with goat as well.

Not every dish hit the mark though, and I sometimes wanted bolder flavors. The sopa de tortilla — chicken soup topped with fried tortilla strips — had an appealing, smokiness from the use of pasilla chiles, but was otherwise rather bland. Call it a consequence of Berkeleyans’ reputation for being spice-averse, but this was one of several dishes that would have benefited from the heat being dialed up a notch.

Meanwhile, tacos, at $3 a pop, featured top-notch corn tortillas, which are pressed and griddled to order. But with the various meat options, we only had about a 50 percent success rate. The cubes of carne asada had nice crisp edges, but lacked flavor and were overly chewy. And maybe we just got a bad batch of the restaurant’s well-regarded carnitas, but we found the pork to be altogether too dry and lean.

On the other hand, the chicken mole taco was excellent — smoky, complex and, unlike so many moles, almost entirely savory. And the table’s consensus favorite was the chicken tinga, which featured a house-made chipotle salsa that had plenty of kick.

Whatever you do, be sure to wash your food down with one of the restaurant’s daily agua fresca options — the slightly pulpy watermelon version was especially nice.

Last week, Los Cilantros launched a Friday-and-Saturday-nights-only dinner service to start out. Weekend dinner service will be a little more formal, perhaps with wine and candlelight. The food, too, will be somewhat more elaborate — white pozole and alambre (a griddled beef and vegetable dish), for instance.

And did you know Lugo cooked for the Chilean novelist Isabel Allende? I’m told Allende and her husband were fans of Lugo’s halibut ceviche and her chicken guajillo with potatoes — dishes that will almost certainly make an appearance on Los Cilantros’ dinner menu. Time will tell, but there’s a good chance that South Berkeley will enjoy them, too.