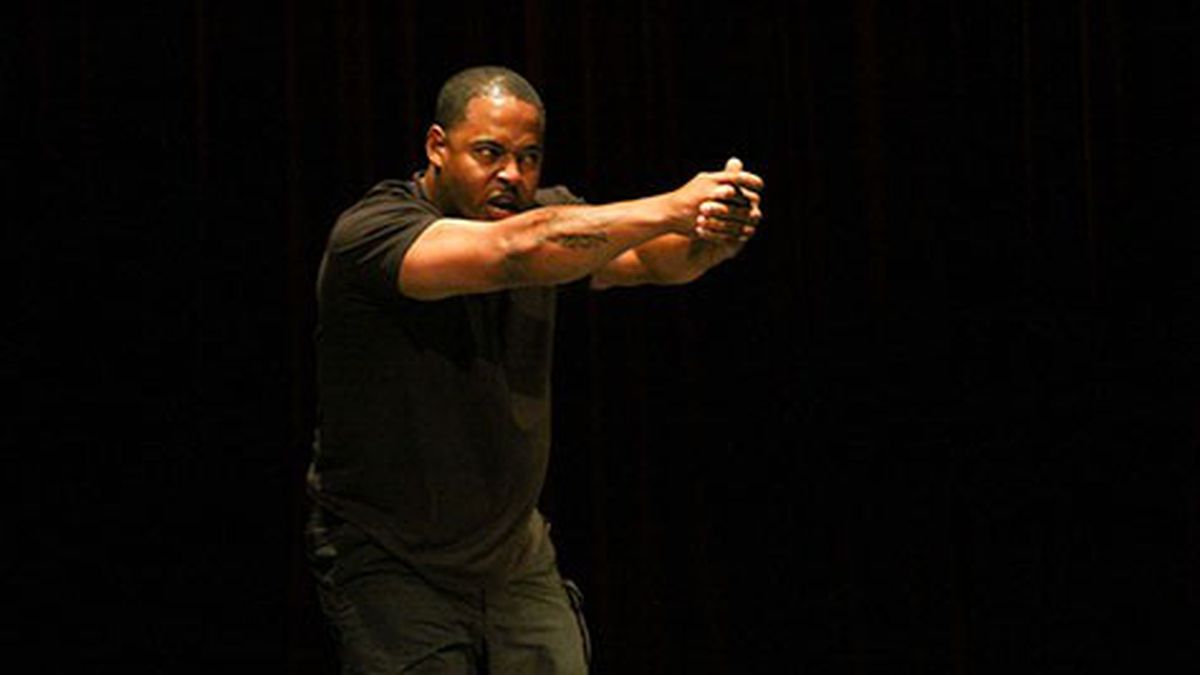 Oakland-raised law enforcement officer, rapper, and actor Jinho "The Piper" Ferreira highlights the subjectivity of justice with his one-man play.

Jinho Ferreira is an Alameda County law enforcement officer, a successful rapper, an award-winning screenplay writer, and a West Oakland native. Now, he is also the star of a self-written one-man play, Cops and Robbers. It’s a play that, in part, aims to bridge the social gaps between the various roles that he inhabits by vocalizing the experience of being uniquely situated at the intersection of stereotypically conflicting perspectives — such as those of a cop and a rapper. In doing so, he engages in a crucial dialogue about the relationship between law enforcement, the media, and the black community.

Throughout his life, Ferreira has played a multitude of roles, many of which don’t easily align. He exists among a number of distinct communities, empathizing with each in a different way. Doing so has led him to a rare understanding of the power dynamics and underlying pressures that tie these communities together — as well as the gulfs of disagreement that separate them. “I didn’t just go from one to the next to the next. I have ties in all of them simultaneously, and I travel back and forth,” Ferreira said. “I’ve basically noticed that all of these worlds are disconnected. None of them speak the same language. They all feel passionate about things that happen, but when it comes down to it, they’re not even having a conversation. … I had to come up with a way to show everyone the world as I saw it.”

Since 2003, Ferreira — who is also known by his stage name “The Piper” — has been a member of the alternative hip-hop group Flipsyde. For a long time, rapping served as a creative outlet through which Ferreira could broach discussions of class, race, and violence. More recently, however, he realized that in order to better characterize the social dynamics he hoped to interrogate, he would need a medium that afforded him more time and attention from his audience. So he sat down and wrote Cops and Robbers in just three weeks.

In the play, Ferreira plays sixteen different roles, including a police officer, a news reporter, a black activist, a conservative white talk show host, and a judge. The plot hinges on an officer-involved shooting, with each character chiming in on the ethics of the incident from their contextualized perspective. Ferreira hopes that the array of angles expressed will challenge viewers’ preconceived notions of justice by highlighting the various pressures at play for each individual involved. In other words, Cops and Robbers aims to stoke a conversation that Ferreira believes is lacking between the various communities he belongs to, and to approach broad, systemic social issues through realistic drama.

Ferreira was drawn to theater because he hoped to reach new demographics. He felt that if he were to approach his subject matter through music, he would only reach a narrow audience of hip-hop listeners. He wanted his audience to include people who wouldn’t normally listen to rap. “I’ve performed [Cops and Robbers] all over and all kinds of people have come to see it — cops, teachers, probation officers … I’m making art that I believe is reaching my desired targets,” he said.

Even as a hip-hop artist, Ferreira never fully felt that his music was reaching the people that it is was meant to reflect. Although Flipsyde has garnered stateside success, much of the group’s time has been spent opening for big names on international tours, such as Snoop Dogg and the Black Eyed Peas. “A lot of conscious artists, even though they make art about disparities in Oakland, they go perform in India and Italy. That’s what we were doing. If you make music and art about the disenfranchised and perform it at the University of Michigan for highly affluent, educated people, it’s not getting to the people that you made it for or causing any real change,” Ferreira said. “I started feeling like a painting hanging on the wall in a museum.”

For Ferreira, it was important to reach a diverse audience because the point of the play is to acknowledge the diversity of perspectives present in a power clash such as a shooting. Each character he plays represents a certain ethical ideology that he has encountered in his life. In evoking all of these angles, it was also important to him to attempt to be unbiased and unfiltered. “A lot of people say the play hurts but they needed it and they thank me. A lot of people have been in tears,” he said. “It’s not for me to take sides in the play. It’s for me to reveal what I’ve seen — the ideas and the different values that people hold and live by.”

After the play first premiered in the summer of 2012, Ferreira decided to expand the project in order to gain an even wider reach. In the past year, he has put together an audio play, a soundtrack by Flipsyde, and a book that elaborates on the original production. Ferreira wrote the book with his wife, Dawn Williams Ferreira, a research project manager at UC Berkeley. It begins with an introduction that contains a brief history of law enforcement and the black community, then moves on to the relationship between hip-hop and law enforcement, and then includes Ferreira’s personal reflections on what could be done to reduce violence in Oakland. The book also contains a copy of the play’s script, backstories for the main characters, and a curriculum outlining how to teach the play in a classroom.

The book also contains a description of the work that Ferreira does at the Recreation, Education, Arts, Career, and Health (REACH) Ashland Community Center. There, he works to develop a range of programs — such as sports leagues and job placement — that are meant to prevent crime by providing safety and support to youth and ex-offenders. “We could go around and arrest everybody, or we could attack the criminogenic factors that are creating crime,” Ferreira said. He decided to become a police officer in 2010 partly because he wanted to see his approach to law enforcement represented on the force. Beyond challenging people to begin acknowledging and accepting others’ perspectives, Ferreira also hopes that Cops and Robbers will drive people to be proactive about creating change in their communities by confronting audiences with realities of disparity and violence. “What progress are we making in the world if we’re not challenging each other?” he said.

Facebook
Twitter
Linkedin
Previous articleOne Night Stands
Next articleMid-Week Menu: The Kwik Way Is Closed, Muracci’s Is Coming to Berkeley, and The Dock Is Giving Away Beer
18,656FansLike
0FollowersFollow
67,429FollowersFollow