Using taxpayer funds, the East Bay representative hired the child of a wealthy donor after she contributed to his political war chest, too. 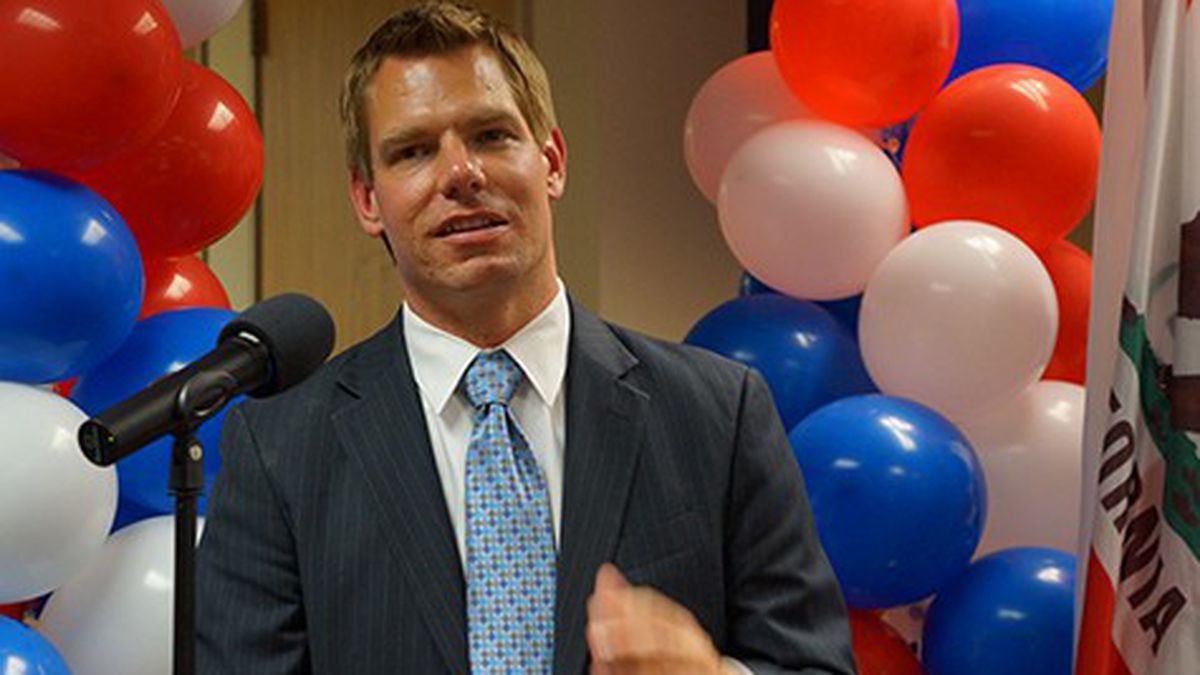 Just after he was sworn into office in January 2013, East Bay Congressman Eric Swalwell hired the daughter of a wealthy donor after she also contributed to his winning 2012 election campaign, records show. In all, the family of William “Bill” Watkins — who is the former CEO of Seagate Technologies and Bridgelux, a high-tech LED manufacturer in Livermore, and now leads Imergy Power Systems, a Fremont energy storage startup — has contributed a total of $25,200 to Swalwell’s campaigns, including a $5,000 donation to a PAC that has ties to the moderate Democrat. The donations also included a $2,500 contribution that Watkins’ daughter, Kelly Watkins, made to Swalwell before he hired her to fill a taxpayer-funded job in his Washington, DC office.

According to campaign finance reports, Watkins himself donated $7,600 to Swalwell, while his wife, Denise Watkins, contributed another $5,100. In addition, their other daughter, Casey Watkins, donated $2,500 to Swalwell. After the donations were made, Swalwell hired Kelly Watkins to a $30,000-a-year job in the nation’s capital. She now works in one of his East Bay offices.

Swalwell, who was a surprise victor over longtime liberal East Bay Congressman Pete Stark in 2012, declined to comment as to why he hired Watkins after the election and whether this decision was related to campaign donations that she, her father, and the rest of the family had given him.

Melanie Sloan, executive director of the Center for Responsibility and Ethics in Washington (CREW), a nonpartisan political watchdog group, said she would be surprised if Kelly Watkins’ job was directly related to the donations. “But that being said, it doesn’t look good,” Sloan added.

It’s also not clear how Kelly Watkins could have afforded to give Swalwell $2,500 in 2012. In campaign finance reports from that year, she listed her job occupation as an intern at an environmental consulting firm. Nonetheless, she also donated $1,000 each to the congressional campaigns of John Garamendi and Jerry McNerney. Bill Watkins also made substantial donations to those campaigns, records show.

It’s also unclear how Casey Watkins afforded the $2,500 donation she made to Swalwell. On a campaign finance report in 2012, she listed her occupation as being “not employed-student.”

Although it is not uncommon for the family members of big donors to contribute to the same candidates, Sloan noted that young adults typically donate small amounts — less than $100. In addition, it’s illegal for a donor to give money directly to a family member for the purpose of then contributing that cash to a political candidate. However, such financial maneuvers within families are often difficult to prove. “It does seem like they were looking for ways to contribute more money,” Sloan said of the Watkins family. “It’s a way to expand your influence and power.”

Bill Watkins did not respond to a request for comment for this story. Campaign finance records show that he also donated $5,000 to the Alpha Valley Business and Technology Consortium, a political action committee that backs Swalwell.

This is not the first time that Swalwell’s actions involving a large donor and his family have raised ethical and legal questions. During the 2012 campaign, Stark accused Swalwell — who then was on the Dublin City Council — of accepting bribes from a powerful Tri-Valley developer, Charter Properties, in exchange for the Dublin council’s decision to rezone a lucrative development and add more housing units. James Tong of Charter Properties and four members of his immediate family have contributed more than $20,000 to Swalwell since 2012. Swalwell strongly denied that he sold his vote in exchange for campaign donations. After sharp criticism from the San Francisco Chronicle and Bay Area News Group editorial boards, which both backed the moderate Swalwell, Stark retracted his bribe allegation and labeled the rezoning a “sweetheart deal.”

In addition, during the lead up to the 2012 election, the Express reported that during Swalwell’s short time on the Dublin City Council (he was first elected in 2010), he also voted to award a no-bid contract to Amador Valley Industries, a waste management firm that holds a near-monopoly on garbage and recycling pickup in the Tri Valley. The owners of the company and their associates were all large donors to Swalwell’s campaign, yet he never acknowledged these donations before casting a vote in favor of Amador Valley Industries. Many cities have laws that make it illegal for a politician to accept donations from a government contractor in the months before and after voting on a contract. Dublin, however, does not.

Campaign finance reports also show that Swalwell accepted more than $10,000 in total contributions from Albert Seeno III and his wife for his 2012 congressional campaign. Albert Seeno III is the son of mega-land developer Albert Seeno, Jr., whose Concord-based offices was raided by the FBI in 2010 for alleged mortgage fraud.

Swalwell has also raised considerable donations from health insurance companies and the defense industry. His fund-raising prowess has put him in a strong position this election year. As of December 2013, his campaign had more than $823,000 in the bank. By contrast, his opponent, State Senate Majority Leader Ellen Corbett, a liberal Democrat, reported that her campaign had just over $200,000 on hand.

Although Swalwell is a moderate, he has moved left during the past several months on key issues, perhaps as a way to blunt Democratic support for Corbett. For example, last year he voted to continue to allow the National Security Agency to spy on Americans’ personal Internet use. But then after revelations made by whistleblower Edward Snowden drew intense criticism from the left, Swalwell changed course and decided to back an amendment forbidding the NSA from monitoring cellphones without a warrant.

Likewise, Swalwell backed the use of domestic drones when Alameda County Sheriff Gregory Ahern sought to purchase two drones last year. In addition, Swalwell was initially uncertain over his position on linking annual social security increases to the chained Consumer Price Index, an issue that is deeply unpopular with many seniors. And last December, Swalwell voted for a budget compromise that notably left more than 1.3 million Americans without unemployment insurance benefits. As with the government surveillance issue, in each case Swalwell later positioned himself as being more liberal than he was in the past.

At a meeting last month of Alameda County Democratic Party leaders, who had gathered at a local union hall to discuss endorsing candidates in advance of the state convention, I approached Swalwell to ask him about the Watkins’ donations and his decision to hire Kelly Watkins. He declined to answer, and then walked briskly toward the back office of the union hall, closed the door, and remained there. He later emerged to find out that he neither he nor Corbett had won enough votes to win the endorsement.