The local podcast seeks to radicalize the Bay Area art scene with humor (and swearing). 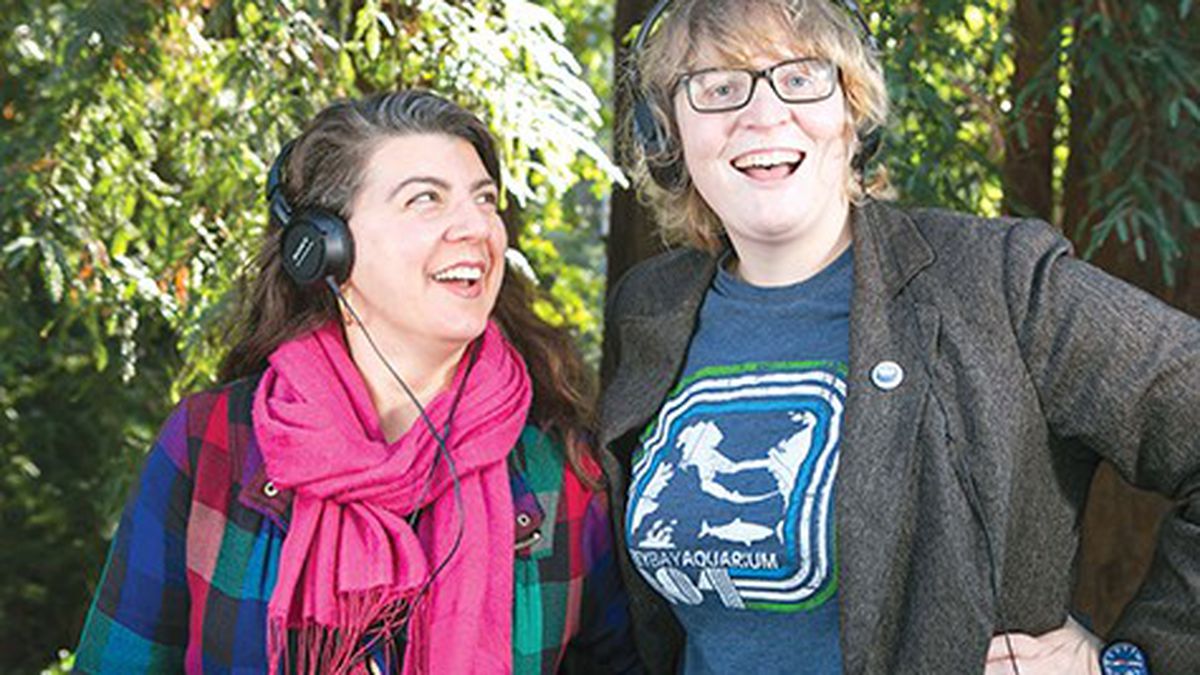 Congratulations Pine Tree is not, as you might expect, a Christmas-related service or a hipster air freshener. Rather, it’s a weekly podcast, created by 2014 Mills MFA graduate Kate Rhoades and Mills College Art Museum program manager Maysoun Wazwaz, that has been touted as “The Bay Area’s number one arts and culture podcast.” Even though the hosts are the ones humorously supplying that accolade, the podcast’s endearing mix of silliness and local cultural critique have earned it much popularity in the six months it has been running.

Both Wazwaz and Rhoades are heavily active in the Bay Area arts world. In addition to her work at the Mills Art Museum, Wazwaz has worked in the arts sector for fourteen years, previously as the exhibitions program manager at Southern Exposure in San Francisco; she is also on the curatorial committee at Root Division.

And even though Rhoades, an Ohio native, has only lived in the Bay Area for about three years, she tries to make up for her newness by “overcompensating with civic pride,” she said in an interview.

One of the goals that Wazwaz and Rhoades have for Congratulations Pine Tree is to interview every artist in Oakland (So far, they’ve completed eighteen episodes). They have spoken with well-known names in the local visual arts world, such as Kevin Chen, an artist who worked as program director for San Francisco’s Intersection for the Arts for more than a decade.

Before its recent round of restructuring and layoffs, Intersection was one of the nonprofits that Wazwaz and Rhoades admired most for its mix of visual arts programming and its community presence. That balance isn’t an easy one to achieve, especially as housing prices continue to strain artists and art spaces on both sides of the bay.

Gentrification is a commonly discussed theme on the show, maybe second to the importance of donating to the Working Artists and the Greater Economy (WAGE), a nonprofit that advocates for sustainable wages for artists across the country. Other segments — such as when the hosts arbitrarily debate Los Angeles’ merits over San Francisco — betray their uncertainties about the future of the Bay Area arts scene. “Being able to create your own narrative of a crisis makes you feel less powerless, even if you aren’t even doing anything,” said Rhoades.

The show’s honesty is part of what makes it relevant to everyone, not just the insider-only blue-chip art world. Most of all, Wazwaz and Rhoades want to create a network that goes beyond the usual artist pool. “I want to talk to the favorite [artists], the people making macramé in their burner trucks and mosaics on the sidewalk, every one of them,” said Rhoades in November’s “Episode 12: Alcatraz, Elections, and Bison.”

It may seem aberrant to have an audio-only podcast about visual culture, but because much of their audience so far is composed of artists, administrators, or curators (or, more commonly, a hybrid), Wazwaz and Rhoades contend that most listeners have seen the shows they discuss. They also contextualize their discussions succinctly. Wazwaz also said that the conversations mostly revolve around ideas that are tangential to exhibitions, rather than specific artworks. For the shows they do talk about in more depth, Rhoades said she relies on her “poetic description.” For example, she likened the recent Markus Schinwald show at the Wattis Institute in San Francisco to “spider porn.”

In the beginning, Wazwaz was uncertain how to balance her podcast voice with her professional work. On the first couple of episodes earlier this summer, she would reluctantly only state her first name, “as if I were Madonna, or something,” she said.

They also thought podcasts seemed more “serious,” a notion they now laugh at, because the show’s charm is its humor. The conversations are fairly serious, Wazwaz said, but the humor stems from their rapport and conversational approach. “We talk a lot of shit to each other,” she said.

“Humor in the art world is an interesting idea to me,” Rhoades said, noting its frequent use as a coping mechanism. Talking about blue-chip galleries and museum shows can be very humorless, the opposite of CPT‘s personality. “Comedy maintains that magic and secrecy that art has completely lost. I feel like the magic that art had is degraded by the institution and the commercial art world,” Rhoades said.

Rhoades and Wazwaz cite admiration for and inspiration from Nia King’s podcast We Want the Airwaves, which focuses on queer artists of color in the Bay Area. CPT addresses overlapping issues, such as changing demographics and the importance of local politics, but also includes broader takes on the art world, its curators, administrators, funding, and direction. These conversations are easy for the two to lead, because of their wide networks on both sides of the bay.

“The whole art-world experience can be very alienating for a lot of people,” said Wazwaz. “You go to a show, you’ve got no idea what anything means, you freak out and think, ‘I’m supposed to love this, but I don’t.’ We are trying to bring that to the forefront and say it’s okay to not know what’s going on.” Congratulations Pine Tree is a resource for those who want to question the art world — and the rest of the world — and to make it better.

Rhoades and Wazwaz are two of the too-few figures in the Bay Area who actively question the status quo of the art establishment. They aren’t afraid to criticize the Ai Weiwei show on Alcatraz and nor do they want to flock to the “money orgy” of high-end art fairs such as Art Basel Miami Beach. Just like brutally honest art criticism, their frequent political assertions can be polarizing, but every episode is not complete without Rhoades begging for listeners to call, text, or tweet to participate. They are huge proponents of individuals embedding themselves in local politics. As Rhoades said in “Episode 12”: “If we’ve got fucking goddamn fascist bastards running our fuckin’ cities, it’s gonna be real hard to make art.”