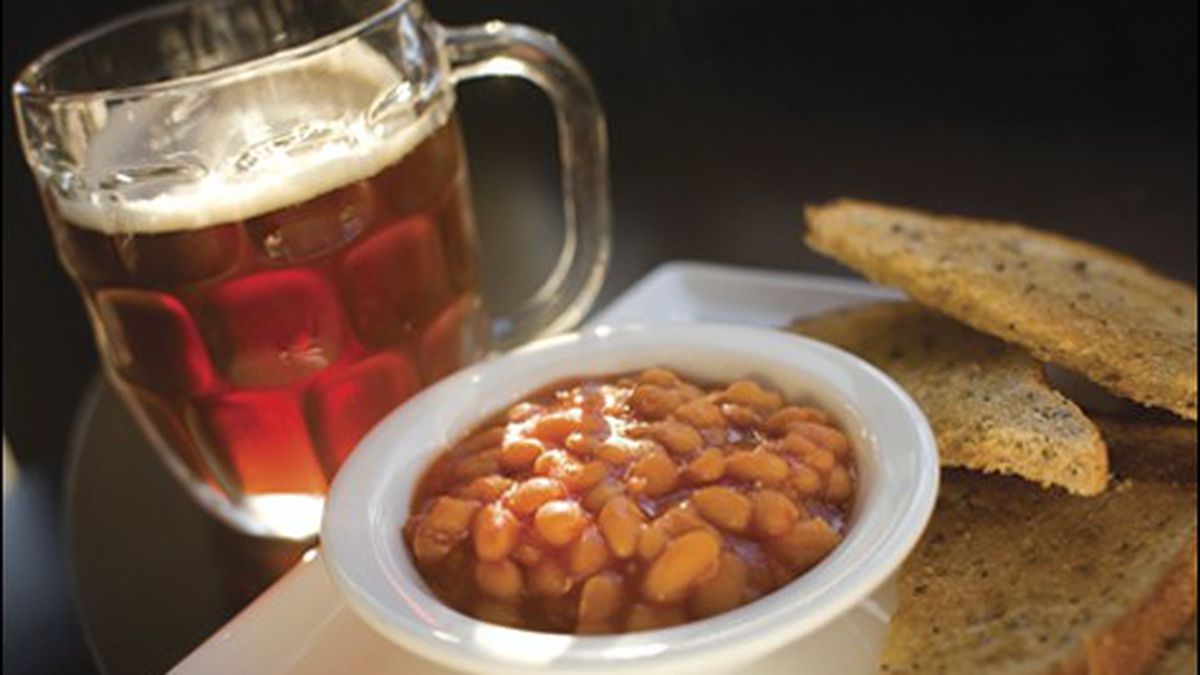 CommonWealth Cafe Is the Sound of London Calling

New Oakland pub evokes the UK without a tacky toy Beefeater in sight.

Once upon a time, funky little neighborhood bars stood sentry all over Oakland. Once upon a time at these funky little neighborhood bars, locals perched on barstools and lounged at little tables watching sports on TV, chins lifted in unison. Women in skin-tight black satin skirts swayed stiletto-heeled. Squinting as if they’d stayed up all night, couples slumped side by side. As that only-in-Oakland, catch-me-if-you-can, milky sunlight slanted through high windows, tattooed toughs — regulars — hoisted heady brews.

Flash forward: A funky little neighborhood bar stands sentry at the corner of Telegraph Avenue and 29th Street. Locals perch on barstools and lounge at little tables — but the tables are glossy treasures crafted by East Bay artist Hillary Kantmann with planks handpicked from an Oakland lumberyard. They watch TV, but it’s a flat-screen, and they’re watching two foreign teams play soccer. Women in skin-tight black satin skirts sway stiletto-heeled, but their clothes come from vintage shops and they’re eating fruit salad at 10 a.m. Looking as if they’ve stayed up all night, couples slump side by side, using laptops. The tattooed toughs, the regulars, are male and female, and they’re drinking Riptide Stout and artisanal coffees small-batch roasted locally.

What has happened to funky old neighborhood bars? Some of them have been supplanted by funky new neighborhood bars such as the CommonWealth, which in its lofty-ceilinged vintage digs offers English porters, Scotch ales, and local beers from Oakland’s Linden Street Brewery on tap along with nourishing meals, and which isn’t even really a bar. It’s a pub.

Defining it as such are the facts that “food is served, kids are welcome, and everyone’s welcome,” said California College of the Arts alum Ahna Adair, who opened the CommonWealth three months ago with her brother Pete Jeffryes and her husband Ross Adair, a Scot who has worked in restaurants and hotels all his adult life. After moving stateside a few years ago, “I got a real job,” he said. It entailed long drives through Oakland and San Francisco’s Mission District, “where I was inspired by all the cool stuff I saw happening, all the young people who were doing cool stuff.”

Further inspired by the award-winning Kannah Creek Brewing Company founded by Pete and Ahna’s father in Colorado five years ago, the trio decided to open a pub. “Irish and British pubs in the US tend to be a little formulaic,” Adair lamented. “We wanted to make ours a new place for people in their late twenties and early thirties.”

Harking back to his grandmother’s recipes, Ross Adair prepares California-fied versions of English-breakfast and pub-grub classics: Heinz baked beans grace whole-grain toast. Steel-cut Scottish oats with dried fruit and golden syrup, aka treacle, stride that rarefied line between sturdy and fluffy. House-baked currant scones spread with house-made jam and whipped Devonshire cream are rich and ever-so-faintly sandy in the manner that has spurred nostalgia in countless displaced Brits from Kabul to Gallipoli. That said, $4 is a bit steep for a lone scone served without side pots of extra jam or cream. Given its stickiness, you might find yourself eating yours with a fork, feeling like the doofiest American alive.

Another Englishism: a squeeze-bottle of simple syrup on the tea-and-coffee-fixings shelf.

Breakfast is served all day — because for pub patrons, any hour might be dawn — and Sunday brunches feature rotating specials. Lunch and dinner entrées include a cheese/egg/bread/nuts/pickles/fruit ploughman’s lunch as well as soups, salads, and two kinds of sandwiches: baseball-shaped marvels on puffy rolls and easier-to-eat “toasties,” pressed flat at their corners. One puffball pairs curried egg salad with chunky house-made mango chutney: a soft, sunny, savory-sweet latter-day vestige of the Raj. One toastie features cured ham, Gruyère, and house-made onion marmalade on rye: that is, ham and cheese with big dreams. Fresh fruit and/or greens garnish each dish.

“My grandmother taught me to make simple stuff from simple ingredients that wasn’t just something you put in the microwave,” said Adair, who plans to serve haggis someday. (“We’re working on that, but we need to ease people into it.”)

Crisp, cheesy sourdough slices swim atop French onion soup as pure and straightforward as a child’s gaze. A satisfying standout is a salad that blends the Englishness of root vegetables with the Americanness of walnuts, cloud-white goat cheese, and greens that the menu Englishly calls “rocket,” but which you know as arugula. Those root vegetables are tangy jewel-bright red and golden beets, whose assertive firmness is another Cali touch. It all comes served on huge white dishes on those lovely tiny tables, enforcing the trendy early-21st-century size-clash conundrum that turns diners into Alice in Wonderland: too big for our tables, too small for our plates.

And it all primes the gut for an onslaught of strong UK brews. CommonWealth offers nearly two dozen in bottles — including Twisted Thistle, Wee Heavy, Scottish Can, and Dogma from Scotland and Blackthorn Cider, Banana Bread, Black Sheep Ale, and Ivanhoe from England, among others — and several more on tap.

“We definitely wanted to be a British-style pub,” said Jeffryes, who is a professional saxophonist. “Every community needs one,” including this nostalgic church-dotted realm south of Temescal, whose other occupants include a record shop, a beauty shop, and an Ethiopian incense shop. A pub such as the CommonWealth, Jeffryes advised, “is a place to enjoy life — and beer — rather than a place to get drunk.”