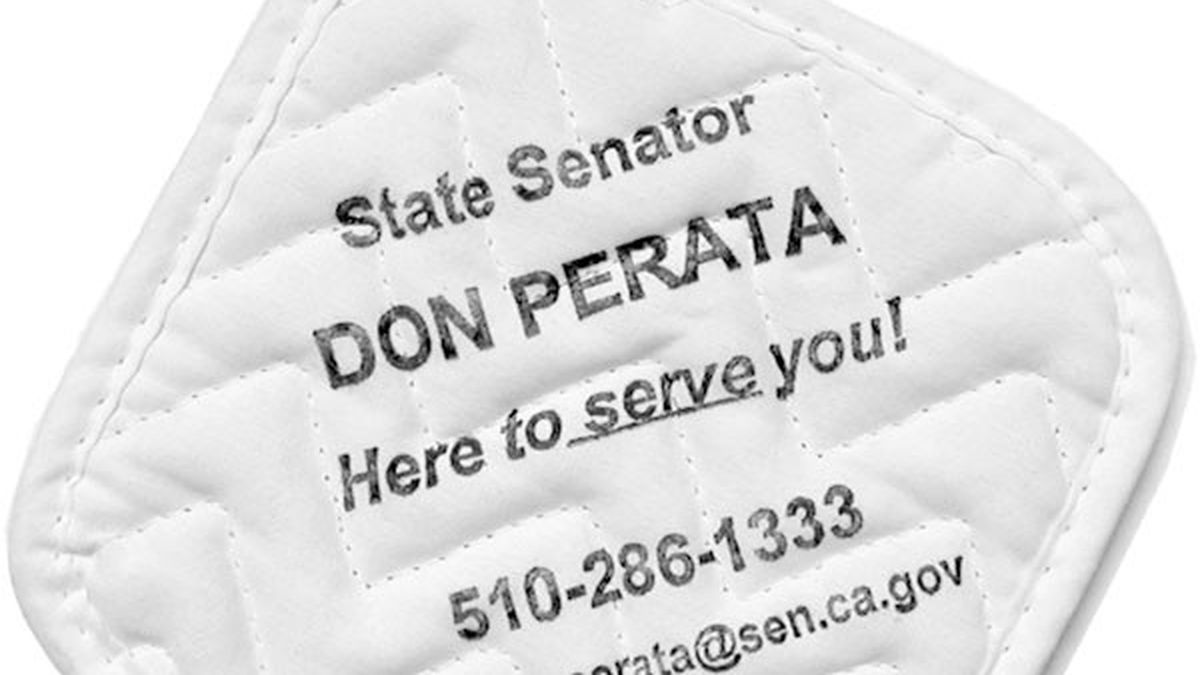 Documents raise new questions about the conduct of Senator Don Perata. Plus, the effects of an indictment on Sacramento and Oakland.

Politicians often accept campaign contributions and then perform favors for the people or companies that made them. Typically, they’ll make calls or sponsor legislation on behalf of the contributors. But if they do these things in exchange for cash payments for their personal use, they have crossed a legal line. At that point, we call it a kickback or a bribe.

As a federal grand jury considers whether to indict state Senator Don Perata, a move that two sources told the Express they expect soon, previously undisclosed evidence raises new questions about whether the Oakland Democrat engaged in such activity. These public records appear to dovetail with subpoenas issued in the federal probe of the senator that indicate the FBI, the US Attorney’s Office, and a grand jury are examining whether he operated a complicated money-laundering scheme involving his close friend and business associate, Timothy Staples.

The questionable financial dealings between Perata and Staples have been explored in detail elsewhere, most notably in the San Francisco Chronicle. Full Disclosure has chosen to examine them again now because of the probability of an upcoming indictment and due to the availability of the recently uncovered documents. Having said that, however, none of this evidence suggests that the dealings detailed here are necessarily part of the case involving the senator.

Over the years, Staples was hired — sometimes at Perata’s urging — by several companies that had business in Sacramento, the Bay Area, and around the state. The senator then would do something to benefit those companies. Staples, in turn, would pay Perata as a “consultant.”

If the money Staples paid Perata came in exchange for the favors the senator performed for the companies that hired his friend, then the payments would be considered bribes or kickbacks. But for years, Perata maintained that there was no such connection, saying repeatedly that Staples had paid him only as a “consultant” for unrelated work. The senator’s spokesman, Jason Kinney, told the Chronicle in 2004 that the senator had maintained “a bright, unbroken line” between his official work and the work he did for his friend.

But recently obtained public records indicate that Perata was much more than a “consultant” to Staples. The records also raise questions as to whether the senator falsified government documents to conceal his true relationship with Staples and the identities of their clients.

In 2000, for instance, Staples listed Perata not as a consultant but as his co-equal in the firm Ascendent Solutions, calling the senator his “co-manager” and “co-member” in official documents filed with the California Secretary of State’s office. In addition, that year Staples also filed official records with the Sonoma County Clerk’s Office stating that Ascendent Solutions had started another company called “Perata & Staples.” In other words, Staples appears to have considered Perata his business partner and not just an outside consultant.

The senator’s spokesman, Kinney, declined to be interviewed for this story and asked to have all questions e-mailed to him. He then would not answer individual questions about the dealings between the senator and Staples, and offered only the following response: “Senator Perata’s prior business relationships were wholly appropriate and clearly allowed under the law.” Kinney also said that Perata does not believe he will be indicted and called the Express‘ sources “patently wrong.” Staples himself could not be reached for comment.

Over the years, the total amount of money earned by Ascendent Solutions and another company Perata worked with, Staples Associates, is unknown. According to public records, the two businesses collected at least $345,530 from political campaigns run by or associated with the senator from 2001 through mid-2004. However, that total does not include monies the companies received for business unrelated to political campaigns.

The payments nearly doubled Perata’s legislative salary. The senator, however, has never specified exactly what he did to earn that much money. Staples once told the Chron that he paid the senator for business development advice.

Was Perata paid for doing favors for companies that hired Staples? According to interviews and news accounts, there is little doubt that Perata did favors for companies that employed his good friend. For example, last week Dennis Chaconas said that when he was the superintendent of Oakland public schools, in late 2000 and early 2001, Perata pressured him to meet with Staples, who was consulting for a company called Falcon Waterfree Technologies. “He asked me to meet with Staples about waterless toilets,” Chaconas explained, confirming a story that appeared previously in the Los Angeles Times. Staples was hoping to sell Falcon’s waterless urinals to Bay Area public agencies. But when Chaconas refused to buy what Staples was selling, and declined other favors the senator requested, Perata fired off an angry e-mail to the former Oakland schools chief.

The senator also did favors for at least two other Staples clients. In 2003, he carried a bill that critics said would have raised car insurance rates for low-income drivers. The legislation, which was signed into law but later overturned by the courts, was sponsored by a powerful auto insurance company, Mercury Insurance. At about the same time, Mercury donated $75,000 to an obscure Oakland-based political committee called “Community Leaders for Neighborhood Preservation,” run by local developer Phil Tagami. In turn, Tagami’s committee hired Ascendent Solutions and paid the company $69,990, according to campaign finance reports. That same year, Perata said Staples Associates paid him $100,000.

Finally, in 2003, Perata carried legislation that became known as the “diaper tax.” The bill sought to impose a fee on diaper sales to pay for a statewide diaper-recycling program. The legislation was sponsored by the nation’s only diaper recycling company — a company called Knowaste. According to a 2004 Chronicle story, Knowaste officials said they employed Staples at Perata’s request during the time that the senator was carrying their bill.

So what does all this mean? If Perata is to be believed, then all these are just coincidences. He was merely a consultant who happened to get paid for work unrelated to the favors he performed for a good friend’s clients. But the recently uncovered documents hint at something much more suspicious. Namely, that Perata was not just some consultant, but a full-fledged partner in an enterprise designed to put state and local government up for sale to the highest bidder.

The Effects of a Perata Indictment

An indictment of Perata would be sure to have political ramifications throughout the East Bay and Sacramento. That would be especially true if the grand jury recommends felony charges sometime in the next few weeks. It appears unlikely that Perata and other Democratic leaders will have hammered out a budget compromise with Republicans before then.

Perata’s goal of making up the budget deficit by raising taxes on the rich faces stiff GOP opposition, and without the senate president, few other Democrats have the political expertise to go toe to toe with Governor Arnold Schwarzenegger. “It will be quite damaging,” said Robert Smith, a San Francisco State University political science professor. “We’re in these very difficult and delicate negotiations. In some ways, he’s the indispensable man.”

At least one longtime observer believes that President Pro Tem-elect, Darrell Steinberg, who is to take over for Perata as the senate leader later this year, will be able to step into the job easily. “He can always send Darrell to the negotiations,” said Barbara O’Connor, director of the Institute for the Study of Politics and Media at Sacramento State University. However, O’Connor does not believe that Perata would surrender his leadership post right away if charged with public corruption. “I would be surprised,” she said. “I don’t think he’ll do it formally. But I do think that Darrell will be out front more often.”

However, one knowledgeable capitol insider said that Perata has kept Steinberg out of the budget negotiations loop. “They’re not getting along,” the source said. “Perata has cut Steinberg out of all this. He doesn’t like him.” Perata’s spokesman Kinney would not answer a question about whether the senator will resign his leadership post if indicted.

In Oakland, an indictment would surely damage Perata’s chances of becoming mayor in 2010, regardless of whether he beats the charges in court. “It leaves the impression in the public’s mind that something is very wrong,” said Smith, who also keeps tabs on Oakland politics. “Even if he were tried and found not guilty, it would diminish him. It’s tough to get your reputation back.”

Observers are split over whether a Perata indictment would damage his friend and former chief of staff Kerry Hamill, who is in a hotly contested runoff for the Oakland City Council at-large seat against AC Transit board member Rebecca Kaplan. Smith thinks that because Hamill, an Oakland school board member, has not been implicated in the federal probe, a Perata indictment likely will not hurt her. However, one City Hall insider believes otherwise. “Kerry already has her job cut out for her,” said the source, noting that Kaplan garnered nearly twice as many votes as Hamill in last month’s primary. “And I think an indictment will have a negative impact on her campaign.”

That may be especially true because of the involvement of Perata allies in what appeared to be an illegal campaign to help Hamill just before the June election. As previously reported by the Express, Californians for Good Jobs, Safe Streets and Outstanding Schools, a brand-new political committee with close ties to the senator, papered Oakland just before the primary with mailers endorsing Hamill. The committee’s phone number is the office of Perata’s personal political consultant Sandi Polka and the treasurer is former Perata staffer Mark Capitolo.

The mailers, which cost at least $34,000 to produce, included personal letters from Hamill in apparent violation of a state law that prohibits candidates from working in concert with such independent committees. In an interview last month, Hamill denied having anything to do with the committee or its mailers and said that the signature on the letters did not match her own. But asked if she was angry with committee officials for forging her signature, Hamill stopped short of denouncing them. “I don’t want people signing my name to anything,” she said. “I want everybody to follow the letter and spirit of the law. I paid a steep price for this.”