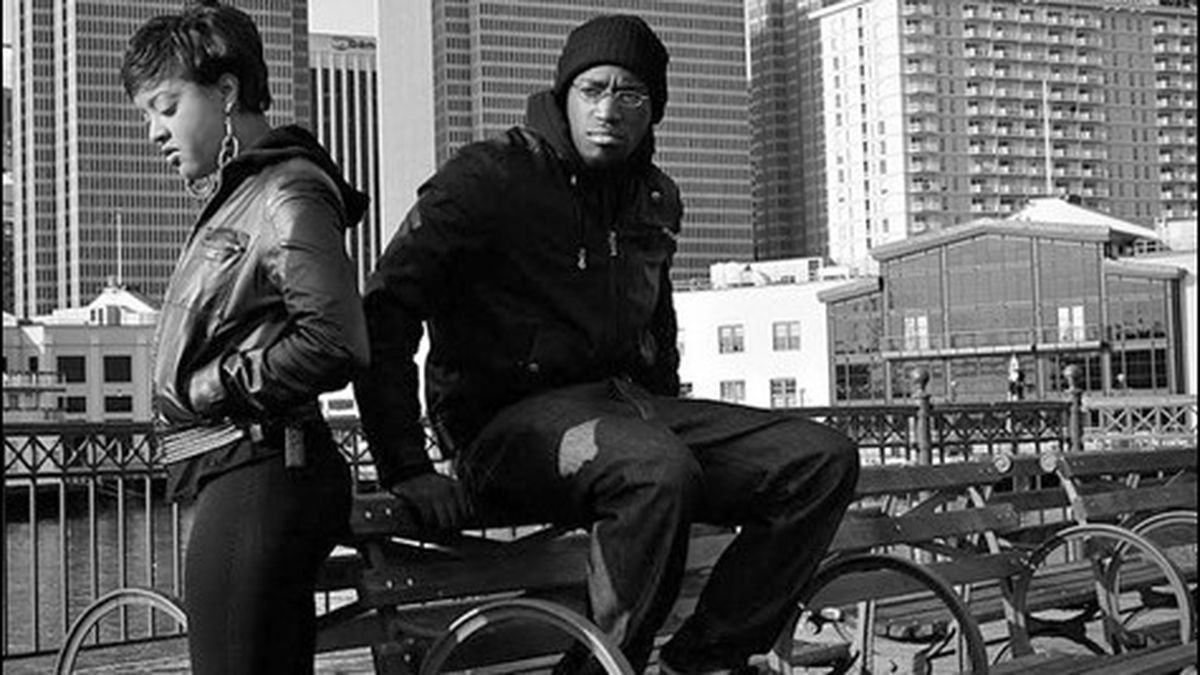 Nu Dekades’ debut album cover art is arresting. It’s a mosaic of headshots, depicting all kinds of random pop culture figures (musicians, politicians, actors, a Shepard Fairey graphic, Kreayshawn’s publicity photo, etc.) that congeal to form the face of Ronald Reagan, gazing into the distance. That might read as a fond memorial if it weren’t for the album’s title, emblazoned in elegant font in the corner: “ERAgance.”

The cover sets the tone for the rest of the Oakland duo’s first album, which came out officially on January 13. It’s in-your-face, opinionated, and takes aggressive stabs at the state of the economy, money, and society, both locally and internationally. The duo recorded the album with producer and silent third member Will Bracey.

But, “conscious” is a term that lingers in the listener’s mind all the way through. Eventually it pops up, after a racy line toward the end of the album’s most club track, “7ON.” The rappers break into laughter, suddenly becoming self-aware as if they’re having a private phone conversation, and one jokes to the other “don’t worry, we conscious.” It’s a minor moment in the album that invites the question: “What is this tension?

An overtly political message such as the one on the cover or etched in the lyrics of ERAgance is a little less common today than during the “Golden Age” of hip-hop, when political action was a key ingredient in many emcees’ best recipes. Nowadays it’s been washed clean from the mainstream. If an artist who is inoffensive and unmarketable in the pop sense is lucky, he’ll get slapped with the “conscious” tag, and allowed them to impart his message through major outlets under the precept of being somehow different, cleaned up, or safe.

“I think [‘conscious’] is probably played out as a term – nowadays, you probably think, patchouli and hemp, or Common in some knit pants or something,” emcee Ryan Peters put forth playfully over the phone, laughing at her own portrayal.

Peters, who goes by RyanNicole, qualified her statement: “I definitely think we’re quite mindful of what we’re saying, being mindful of everything we put out there is important for us.” But to her, that’s the extent of how Nu Dekades represents “conscious” hip-hop.

Kevin Akhidenor, who goes by K.E.V. (Killin’ Every Verse), makes more of an attempt to reconcile the tag with the duo’s own style. “I always say that we’re ‘reality rap.’ The term ‘conscious’ – it’s, like, what is that? Just speaking on realistic terms about life? Plain and simple?”

In that spirit, ERAgance sends a wide variety of messages. There are political statements, sure; but there’s also critiques of pop culture, odes to partying, and plenty of accolades for grinding, getting paid, and even instances of the word “swag.”

Often K.E.V. channels the rough, dark alleyways of the greatest Brooklyn cyphers. RyanNicole is a strong, independent voice, who may be less technically apt than K.E.V., but displays tremendous versatility. Her verses ring of a time when women were on more even footing in the rap world, and she still throws playful nods to the pop-oriented females who are huge today — the Kreayshawns, the Nicki Minajs, who use their womanly charisma as a hook.

“It’s been pretty treacherous territory for women in hip-hop, but now I think it’s warming up again,” she said. Peters’ optimism is genuine, and she also doesn’t mind giving props to pop stars who don’t deliver an important message. “I give credit where it’s due.It’s not a small feat to crack the glass ceiling and make it to where people know your name and sing your songs, but it must be a Catch-22, because with that platform, I would just be so excited to say something that meant something.”

The duo also recognizes the place of movements like swag, while politely focusing on perfecting its craft on a micro level. Peters makes the analogy: “If you had an ice cream sundae, and the ice cream is the substance, and ‘swag’ is the sauce over the top, then so be it. But if you’ve just got the sauce…” the conclusion seems obvious. “We’re making ice cream.”

And that means constant churning. Since forming in 2007, Nu Dekades has played shows constantly and written hundreds of songs. But they haven’t recorded much. Peters attributes that to an overly cautious approach. “I’m not a perfectionist, but I definitely believe in putting your best foot forward,” she said. The duo’s high-spirited concerts have been a testing ground for each tune, such that, when the emcees were finally ready to record their debut, they were confident with the material.

It’s a methodology that contrasts with that of Oakland duo Main Attrakionz, whose members are almost ten years younger and have taken the opposite path to recognition, de-emphasizing live concerts and extending their influence solely through Internet buzz.

At 27, the members of Nu Dekades might already be old-fashioned, but their focus on performance quality has also landed them spots playing with everyone from Questlove to Murs. Most recently, they played a packed New Year’s Eve at Shattuck Down Low with Devin the Dude.

The duo has a pretty strong and visible connection to the community as well. Peters is the executive director of Youth Movement Records, an after-school, nonprofit program and media company that helps kids learn musical and recording skills for free. They host anywhere from 40 to 125 kids an afternoon, and use a peer-educated method to allow more advanced students to teach younger beginners. Incubated at La Peña Cultural Center and moved a few times since then, the organization has fought to stay afloat while mentoring exciting new talents such as the Oakland-by-way-of-Panama group Los Rakas.

Akhidenor has a similar position, as bookkeeper and administrator at the East Side Arts Alliance, an organization focusing on social change in the San Antonio district of Oakland. East Side Arts Alliance runs multiple youth programs and, from time to time, Akhidenor steps in to mentor other young rappers in their Beats, Flows & Videos program. He describes his role: “I consider myself like an older brother for some of them. I’ve had my older brother-mentor types, but now that’s what we do for these kids.”

Now, Nu Dekades needs to round out its approach — RyanNicole and K.E.V. know that it’s time to seek publicity from routes other than live shows, and be open to the opportunities afforded by the Internet, while keeping the vibrancy of their message. That said, the group recently saw a good omen: A few months ago Nu Dekades was short-listed in a contest sponsored by Universal Music. That bodes well for the future.