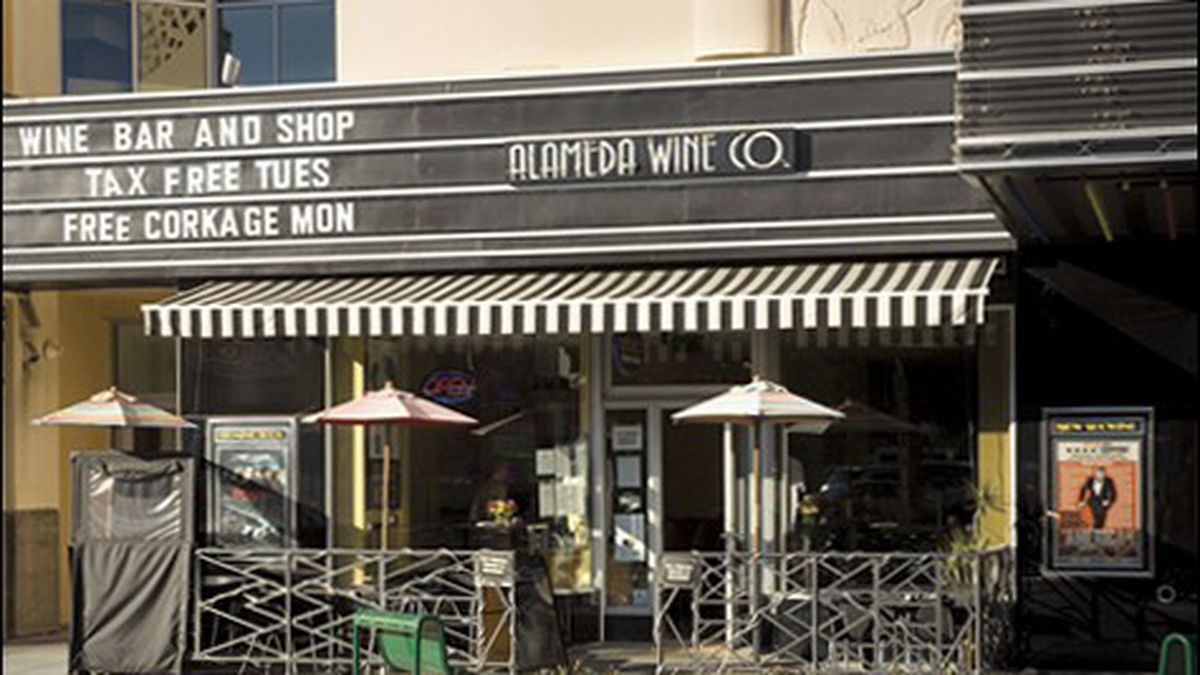 Wine bar and shop runs afoul of city over terms of lease.

One January morning in 2009, when Karen Ulrich opened her Alameda Wine Company two minutes late for business, a city employee warned her that if she did it again she could potentially lose her lease, the business owner said.

Dorene Soto, a manager with the Alameda Business Attraction and Retention Division, was waiting for Ulrich to breach her lease agreement with the City of Alameda by not opening her store precisely at 11 a.m., Ulrich said. Soto then documented her tardiness and served her a lease violation letter.

In 2008, Ulrich had signed a lease with the City of Alameda to open a wine store and bar in a historic city-owned building near the corner of Oak Street and Central Avenue. The building, which also houses the historic Alameda Theatre and the Burgermeister restaurant, cost the city more than $600,000 in restorations and was a key component in the city’s economic development plans. Under Ulrich’s lease agreement, in addition to her base rent, she must pay the city a so-called percentage rent, which in her case is 10 percent of all annual sales in excess of $350,000. Consequently, Ulrich’s lease mandated that her store be open between 11 a.m. and 10 p.m. seven days a week.

But since Ulrich opened her business, which she said has yet to earn annual revenues in excess of $350,000, her relationship with the city has deteriorated rapidly. Ulrich said she has been harassed by the city and served nine separate letters for lease violations ranging from posting news articles in her window to opening her store late. With each new violation, Ulrich said, the city has given her a thirty-day window to make corrections and adhere to the terms of the lease.

Now, Ulrich said she is awaiting the results of a September 13 city audit of her business. If the audit concludes that she has been underreporting her sales to the city by 5 percent or more, Ulrich believes she might have her lease terminated for good. “The city wants me removed from the area,” she said. “The city has a kind of buyer’s remorse.”

Soto declined to discuss her interaction with Ulrich or the specifics of the city’s concerns about the business. “Landlords and tenants have issues all the time,” Soto said. “I’m not going to comment on the tenant-landlord issues.”

But the dispute seems to have stemmed from Ulrich’s conclusions about her business. Soon after she opened, Ulrich said, she found that most sales occurred between the hours of 4 p.m. and 11 p.m. and that her wine bar was more popular than her retail shop. So in February of 2009, she went before the Alameda City Council in an effort to persuade councilmembers to allow her to open her business during hours later than those stipulated by her lease.

Ulrich said the council voted against her, calling her plea to alter the store’s hours “premature,” and arguing that foot traffic from nearby restaurants would eventually increase her early business. She said the council also chided her for not attending Park Street Business Association mixers and for not being a member of the city’s Chamber of Commerce.

“I want to re-emphasize how important it is for you to comply with the terms of your lease and open your business on-time,” Jennifer Ott, a manager within the city’s Development Services Department, wrote Ulrich in February 2009. “You will be receiving another official notice from us about your potential default under the lease, if your minimum hours of operation are not adhered to.”

In a subsequent effort to help Ulrich improve her retail sales, the city then decided to hire an outside business consultant. Kim Fraser conducted a general assessment of the shop while suggesting possible improvements to the business. But Ulrich complains that she found most of the recommendations worthless. Fraser could not be reached for comment.

Ulrich said the recent audit was initiated after Soto suspected her of potentially pocketing money from a July fund-raiser she had hosted for the Alameda Education Fund. Soto apparently became concerned after Ulrich raised $7,500 by selling wine bottles during the fund-raiser. And Ulrich said Soto concluded that she was selling food at her shop and not reporting sales. Ulrich said Soto then asked her to provide daily sales reports, which she declined to do because they are not required under the terms of her lease.

In fact, Ulrich said the food that Soto observed came from Troy, a Greek restaurant across the street. And, indeed, a sign in Troy encouraged customers to bring their food over to the wine shop if they wished to enjoy it with a glass of wine. Restaurant owner Carol Masarweh said Soto entered Troy without permission and took photos of the sign. “The City of Alameda never said boo to me,” Masarweh said. “She didn’t say anything to me when I asked her what she was doing.” The restaurant owner said she remains confused by the city’s actions regarding the two establishments’ agreement to share customers. “As the city’s tenant, why wouldn’t they want her to succeed?”

Ulrich said that Kathryn Gibson, who conducted the city’s recent audit, told her that her sales were adding up and that she was doing well for a first-time business. However, Ulrich is sweating bullets still waiting for the final audit report.

“The city has a hard-on for me,” she said. “They’re looking under every rock for money.”