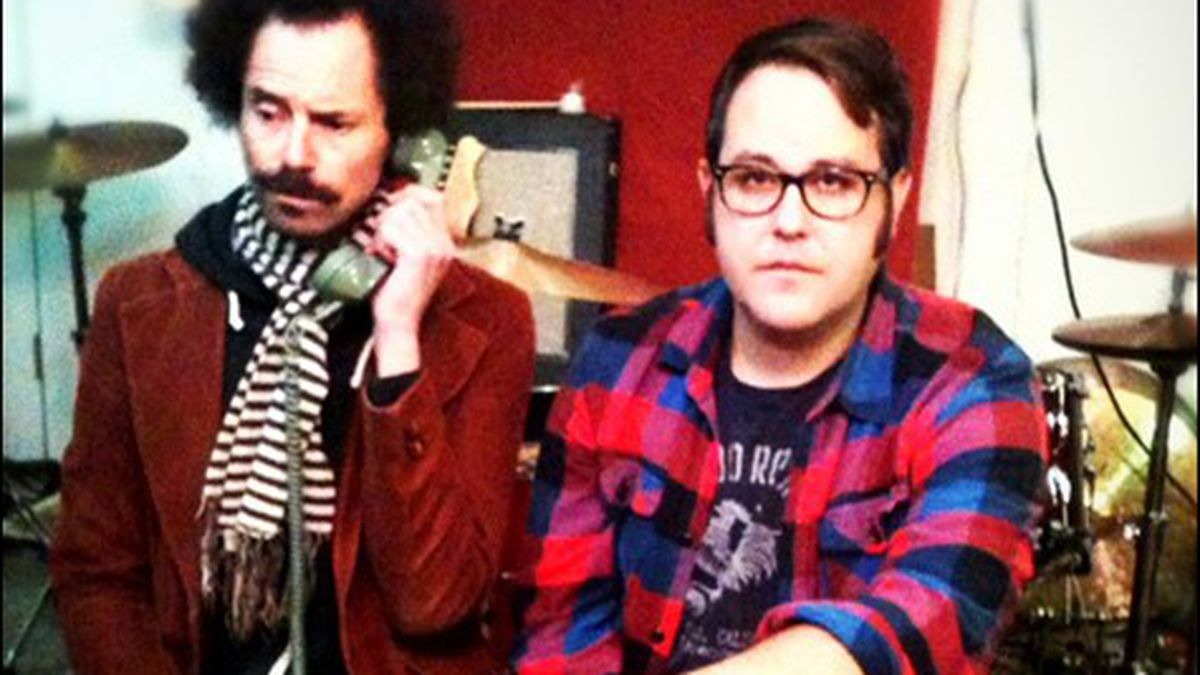 Even a cursory listen to the Oakland guitar-drum duo Churches is enough to get a thumbnail sketch of frontman Caleb Nichols as a frustrated, artsy, poetically depressed gay teenager growing up in Los Osos, California. Well, that’s the idea, at least.

“Picture me,” Nichols said, leaning forward in his swivel chair, the way someone might bend over a lectern for emphasis. “I’m somewhat like Robert Smith in my hairstyle and my nail polish. I’m in my bedroom of the shitty house we lived in back then, in Nowheresville. And I’m looking in the mirror, and Smashing Pumpkins’ “Zero” is playing really loud, and my mom’s probably knocking on the door telling me to stop that. And I’m pushing a safety pin through my ear.” Nichols raised a barely discernible eyebrow above the rims of his glasses while relating this particularly unappetizing detail.

“Stop with the angst already!” snapped his bandmate Pat Spurgeon, swatting the air in mock annoyance. Nichols smiled mischievously. Not only is teenage agony one of his favorite topics of conversation, it’s also his favorite muse. He structured Churches largely around the idea of conveying restive energy in garage-rock form: all melodic riffs and heavy backbeats and yowling vocals to shape lyrics that, he notes, are largely autobiographical. The duo form is brilliant for that, both bandmembers say, because it’s small enough and loose enough to accommodate a vast welter of emotions. “It’s sort of like a commando mission — there are just two of you,” Spurgeon said.

In truth, Spurgeon and Nichols initially tried to collaborate in this format a long time ago, well before guitar-drum outfits became commonplace in indie rock. They first toured together in 2007, when Spurgeon was drumming for the indie pop group Rogue Wave and Nichols was playing bass in the similarly styled, but folksier outfit Port O’Brien. The two clicked right away and quickly hatched plans to form a band together, but it didn’t quite work out. Rogue Wave had started to take off, so Spurgeon was out touring all the time and couldn’t realistically take part in conceiving a new band. So Nichols formed a new four-piece called Grand Lake on his own, with then-roommate Ryan Christopher Parks on drums and Jameson Swanagon on guitar. For four years the two musicians led separate, parallel careers and remained amicable. It wasn’t until this past November that both finally put their respective projects on hiatus to launch Churches.

The impetus also came partly from former Port O’Brien singer Van Pierszalowski, who helped Nichols refine the idea and offered to produce Churches’ first album. Pierszalowski now fronts a different indie band, Waters, and he enlisted Nichols to play bass for several summer tours. Nichols said that most of the conceptualizing — from the name to the pared-down format and the overall sensibility — happened during those long car rides. Originally he was going to launch Churches as a solo project, mostly to release a huge cache of songs he’d written during high school and early adulthood. (He’s 29 now.) He planned to hire Spurgeon as a session drummer, handle all the melodic parts himself, and make it the indie rock equivalent of a memoir. But that idea changed once he and Spurgeon were in the studio together. Their musical rapport was hard to overlook.

“I think the danger that you might get into, if you’re a two-piece band, is playing too much,” Spurgeon said. “I want to keep it very bonehead, very simple.”

“Which is very teenage,” Nichols conceded.

Appropriately, the two of them look a bit like overgrown teenagers. Nichols wears flannel shirts and big Coke bottle glasses. Spurgeon is tall and rangy, with a handlebar mustache and a thick puff of curly hair. Both of them fidget constantly, as if to expel all the bottled-up adrenaline that they never quite exorcised as teenagers. Hanging out in their West Oakland studio last Wednesday night, the two musicians seemed to be constantly in motion. Nichols twirled from side to side in his swivel chair. Spurgeon flitted from his computer to his chair to the adjacent room, grabbed a corduroy jacket and swaddled himself in it, picked up a banjo and began tuning it. He appeared to focus better with part of his attention diverted.

Much of their excitement could have generated from an earlier recording session, during which they cut several tracks for a forthcoming debut album. But some of it is just the way they move through the world, and it’s integral to the aesthetic of Churches, Nichols said. He insists that rock can be forlorn and sensitive while retaining bullish, aggressive, upbeat, and urgent energy. “I think there’s no angst in pop culture, and I’d love to change that — because there’s plenty to be angsty about,” he explained. “Everyone’s walking around like everything’s a-okay, everyone watches Glee and listens to dance music. I don’t know man, there’s some wild, dark stuff just beneath the surface.”

Spurgeon concurred, adding that he sees evidence of that collectively escapist attitude in his side gig as a club DJ (at local bars like The Layover and Missouri Lounge). “When people ask for dance music I almost want to reach down their throats and pull them inside out.”

“I just think there’s something more urgent that needs to be in music than just shaking your ass,” Nichols said.

That’s exactly what he’s trying to convey in Churches, particularly with the songs he wrote in high school. Take “Lethargy,” which Nichols describes as “the saddest love song of small town gayness” that ever existed. In other words, it’s about coming of age — and eventually coming out — in a town of sixteen thousand people that pretty much consists of a grocery store, a Rite Aid, a couple youth centers (where Nichols launched his career as a rock star), and a checkerboard of boxy, identical homes. Or take “Big Soul,” which is actually animated and bouncy, even though it’s about unrequited love and sexual frustration. Or take the band’s newly minted single “Save Me,” which relies on a warm major-key melody to shore up the sentiment of lyrics that are really about desperation and longing.

“Churches, stylistically, is really coming from that era of my life,” Nichols said, pointing out that the religious references aren’t entirely ironic — he really did feel a strong desire to be “saved” as a teenager, even if he found salvation in Smashing Pumpkins and The Pixies rather than in Christianity. (Also, his middle name, “Kirke,” is German for “church.”) And while that period might have been painful, he and Spurgeon do everything they can to preserve it. They still dress in the early-Nineties grunge style that was popular during their high school years. They still orient their lives around rock music. And for that matter, they still love the same bands — Nichols keeps Smashing Pumpkins’ “Today” as his cell phone ring tone. Such things might make Churches seem hopelessly nostalgic or self-referential. But Nichols knows his ideal audience. “I definitely have in mind making the kind of record I would have really have liked to listen to when I was sixteen.”

The Heart Is A Drum Machine DVD Releases Tomorrow