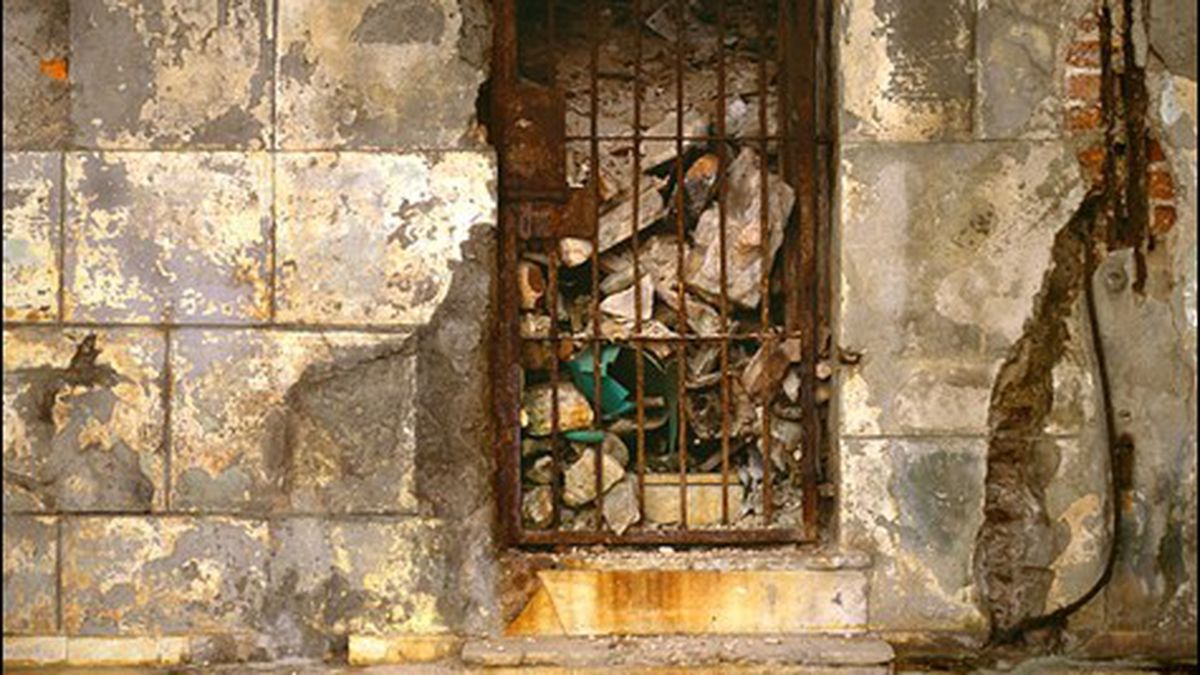 Deconstrucions, his exhibit of photos of Cuba, on display at PHOTO.Kala Art Institute Gallery

In The Pleasure of Ruins, Rose Macaulay’s book of erudite ruminations on Persepolis, Machu Picchu, Angkorwat, and other picturesque piles of ruins, she wonders why we’re fascinated by fallen glory: aesthetic pleasure, historical/literary associations, morbid pleasure in decay, righteous pleasure in retribution, mystical pleasure in the destruction of all things mortal, egotistic satisfaction in surviving? Charles Anselmo has been traveling to Cuba for more than a decade, photographing the effects of economic deprivation and tropical fecundity on the colonial architecture of Havana (and also championing the work of Cuban photographers here on the big island). His large-format color photographs on paper and silk banners and his small-format black-and-white studies of Cubans in Deconstructions: La Habana pose Macaulay’s questions anew for contemporary viewers.

In postmodern theory, deconstruction is an analysis of societal power structures hidden within cultural artifacts (e.g., buildings and photographs); artworks are analyzed from political and economic perspectives rather than aesthetically. Anselmo, who sees Havana as “achingly beautiful and conflicted,” and describes his perambulations there as “like walking inside a living thing,” is interested in the emotional and historical content of the visible world, so his images of achingly beautiful arrangements of texture, pattern, and color are imbued with human presence and absence. The past resides in these crumbling, lichen-covered walls; gaping, corroded, electrical junction boxes with their rootlike wiring, all but indistinguishable from wiry tendrils; stained wallpapers; patches of fallen plaster and stucco; refuse-filled gated doorways; and remnants of colonial elegance: decorative tile, ironwork, and furniture. Like Walker Evans’ photos of Depression-era sharecroppers’ shacks or antebellum mansions gone to seed, Anselmo’s photos (“Bernaza y Brasil,” “Havana Gate,” “Missing Building,” “Malecon Electrics #26”) are both documentary and suffused with emotion. Some may even suggest the semi-abstract cultural landscapes of his partial namesake, Anselm Kiefer. By the way, Macaualay cautions that ruins “change so fast that one cannot keep pace: They disintegrate, they go to earth, they are tidied up, excavated, cleared of vegetation, built over ….” Deconstructions runs through September 17 at PHOTO (473 25th St., Oakland). 510-847-2416 or PhotoGalleryOakland.com

Speaking of keeping pace, the first installment of Kala’s annual show of Fellowship Artists ends soon, to be built over by Part 2. Featured are a semi-ironic installation on the theme of mortuary parlors by Maude Léonard-Contant; large-scale color photographs of controlled burns in fire-prone areas of California by Youngsuk Suh; photos and a video of a foamcore NASA Mars Lander T2 by Genevieve Quick; and a lightning-paced video montage of local scenes by Frances Yo. Through August 27 at Kala Gallery (2990 San Pablo Ave., Berkeley). 510-841-7000 or Kala.org