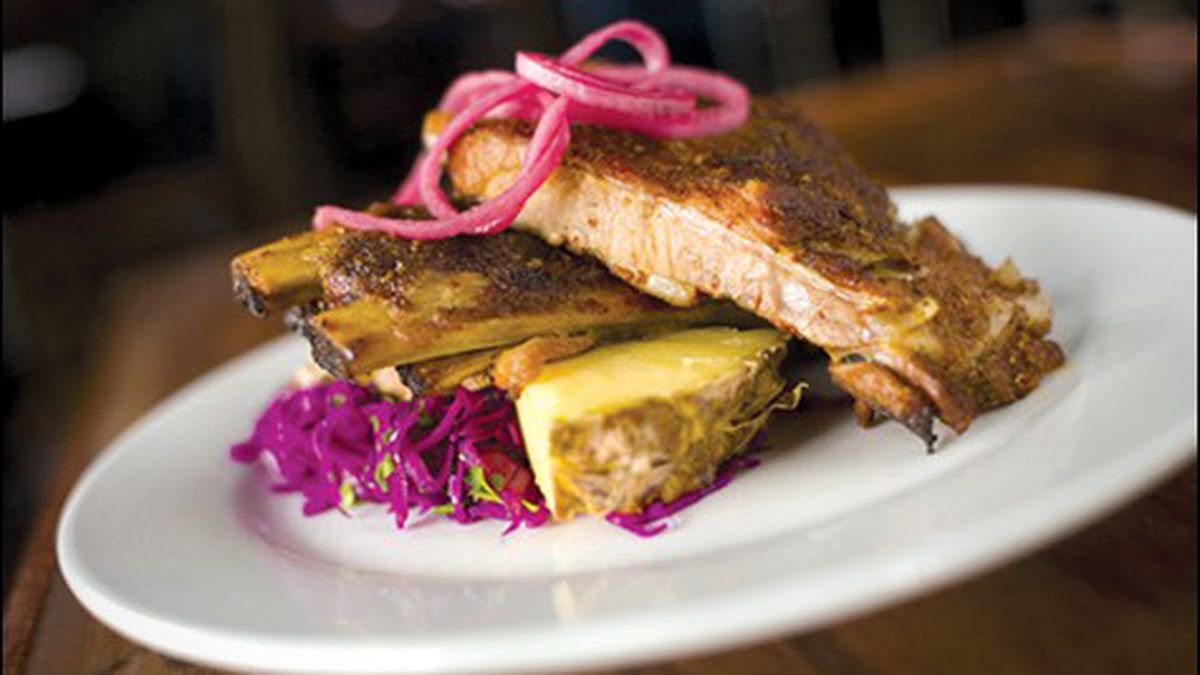 We felt happy as soon as we walked into Disco Volante, a new nightspot-bar-restaurant in downtown Oakland. Some restaurants are like that. While lesser places tarnish the spirit with somnolence, desperation, or fluorescent lighting, others, through some indefinable admixture of décor, mood, clientele, and soundscape, conspire to make the new arrival buoyant and confident and bright with anticipation.

In Disco Volante’s case, it was partly the look (art deco meets baroque North African saloon meets darkling jazz joint, with stained glass thrown in), partly the oxygen (happy buzzing and clinking of glassware from people of all shapes and ages), partly the name (is it a postmodern Seventies throwback? Some demented example of Italian-Martian fusion cuisine? An extraordinarily subtle homage to Ian Fleming’s Thunderball?), and probably mostly the music (the Isley Brothers’ “Fight the Power” followed by the Jackson 5’s “Please Baby, Give Me One More Chance” followed by Stevie Wonder’s “Ngiculela”). The gleaming expanse of a fully stocked bar and the promise of a Hendricks martini didn’t hurt, either.

There’s food, too, of course. Chef Douglas Bernstein, whose credentials include Farallon and Bacar in San Francisco, prepares reasonably priced all-day bistro fare like bar snacks, salads, noshes, an upscale burger, a grilled sausage du jour, and a couple of entrées, plus California-fusion dinnertime specials that change daily, all made in-house (including the sausages and ice creams) out of freshly plucked or reared local ingredients. Each of the dishes is conceptually intriguing, and although the kitchen occasionally opts for either too little or too much in the flavor and texture department, several preparations strike a nice balance between rich, crisp, subtle, and spicy.

The bistro menu features several snack items, including corn nuts with lime juice squeezed on top (one of the underwhelming dishes) and dates stuffed with mochi, wrapped in bacon and grilled (one of the overwhelming ones; the rice paste on top of the dates was a little too gooey-sweet for the nice, smoky bacon). We were also unimpressed with a slab of bland, spongy chicken terrine layered with wild mushrooms. (Aside: The service all evening was friendly and attentive, and when one of our servers noted that we weren’t crazy about the terrine he insisted on removing it from our bill.) The crispy avocado tacos were a treat, though. The “crispy” referred not to the taco but to several thick slices of tempura avocado, stuffed hot and crunchy-creamy into a fresh tortilla with a brisk jicama slaw and a shmear of garlicky puréed beans. And the pork ribs were some of the best we’d had: smoky, meaty, and tender enough to make any sort of sauce unnecessary, served with a tangle of peppery red cabbage and spears of sweet juicy pineapple to accent the pigmeat’s rich flavor.

Among the day’s specials was a soup of puréed carrots, another unexciting dish despite a big dollop of nettle-green garlic relish floating in the middle of the bowl. On the other side of the coin was a salad of arugula, salsa verde, and overly rich and fatty grilled lamb tongue. But another salad successfully balanced the subtle flavor of tender grilled squid against crisp jicama and a bright pumpkin seed salsa, while a side dish of al dente charred yams drizzled with green garlic aioli was surprisingly yummy. The best dish of the evening, though, was a perfectly roasted steelhead trout, crisp on the outside and moist and tender within, served on a bed of farro jazzed with crunchy almonds and snarky green olives.

For dessert there’s a marvelous coffee flan far removed from the soft, gentle custard of tradition; dense and chewy as a medium-rare steak, it was packed with plenty of caffeinated flavor and was nicely complemented by a couple of light, crisp snickerdoodles. The Root Beer Sunk featured two big scoops of rootsy, funky house-made sassafras ice cream, but the vanilla soda that accompanied it was pallid and anticlimactic. Then there was the ganache, a sizable rectangle of thick, dark, sweet chocolate like the innards of a really terrific truffle, served with rounds of grilled bread brushed with olive oil and sprinkled with sea salt. The dessert would’ve been better if the ganache had been unchilled and easier to spread, but it was still a luscious example of the sweet salt subgenre.

Although the bistro menu fluctuates and the specials change on a daily basis, vegetarians can count on a fair if not wide-ranging array of meatless options. Smoked pecans, marinated olives, red cabbage slaw, and rosemary chips (as well as the lime-y corn nuts) are among the snacks and sides. Salads include a wild arugula-pear-blue cheese tossup and chilled asparagus with mint, yogurt, and pine nuts. The daily soup trends vegetarian, the crispy avocado tacos make a fairly substantial entrée, and recent specials have included roasted beets with horseradish croutons, wild nettle pie with vegetable escabeche, and the charred yams with aioli.

The brief yet wide-ranging wine list (six whites, five reds, a rosé, and two sparklers from France, Italy, Germany, Spain, and Sonoma ranging in price from $22-$45, all of them available by the glass) is outclassed by the exceptional beer selection. There are six drafts (including Berkeley’s Trumer Pils and Oakland’s Linden Street Black Lager) and fourteen bottled options ranging from Chimay and Boddington’s to Mendocino Brewing Company‘s Red Tail Ale, Davis’s Sudwerk Hefeweizen, Anderson Valley Brewing Company‘s Brother David Triple, and Bitch Creek ESB by Grand Teton Brewing Company out of Victor, Idaho. No house cocktails as of yet — the liquor license only just arrived in the mail — which is something of a relief to those of us taking a breather from the huckleberry vodka scene.

That Hendricks martini was perfection, though, and the setting (an antique terra cotta deco landmark that for years housed a women’s clothing store) is a striking high-ceilinged, subtly lit barn of a place with elevated banquettes, cranberry-colored walls, stained-glass accents, a vintage jukebox, an all-seeing Lucky Cat over the bar, and a raised stage where live music is performed several nights per week. Opened in early February by co-owners Kevin Cook, Damon Gallagher, and Tim Tolle, Disco Volante is another welcome addition to downtown with its wee-hours menu of tasty food and a most personable vibe.