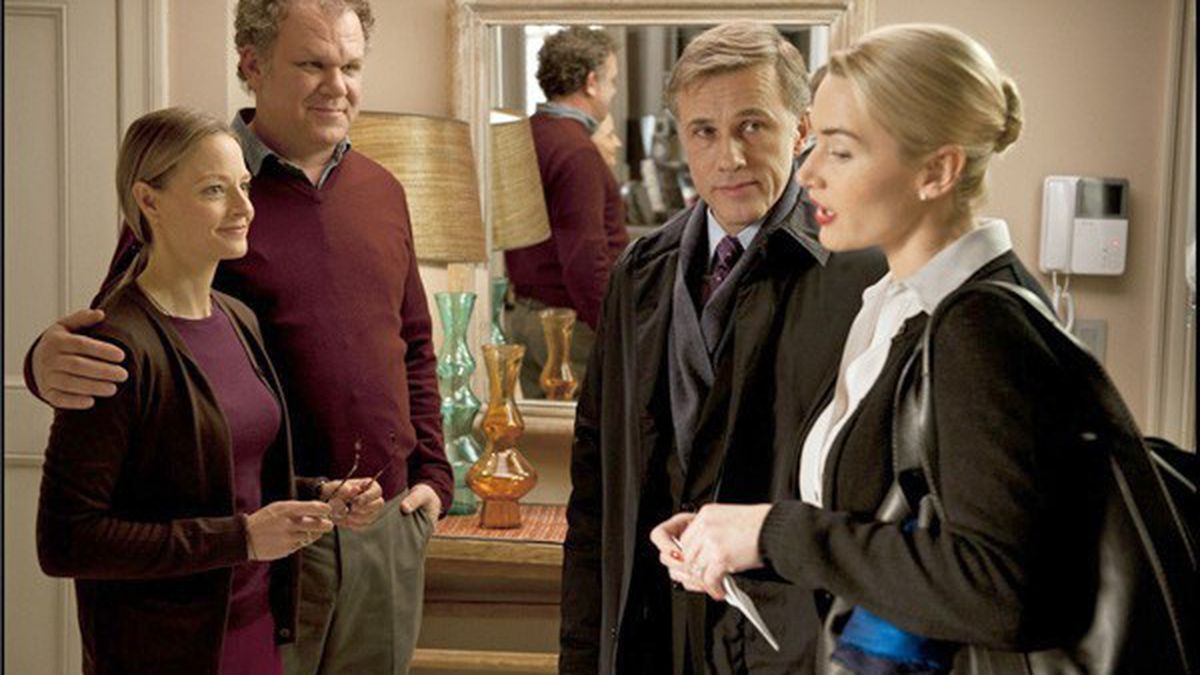 What a pleasant change of pace for Roman Polanski with Carnage. That is, if your idea of “pleasant” is watching a well-matched quartet of self-conscious, upwardly mobile urbanites verbally spar with each other, tip-toeing the line of violence without spilling any blood. Works for us.

Playwright Yasmina Reza’s screenplay, adapted from the French stage play with Polanski, puts two nervous middle-class couples in the same Brooklyn, New York apartment with each other to discuss what to do about their sons, one of whom socked the other in a minor dispute. Artsy-craftsy Penelope Longstreet (Jodie Foster) and her home supplies salesman husband Michael (John C. Reilly) have already negotiated a satisfactory agreement with Nancy (Kate Winslet) and Alan Cowan (Christoph Waltz) as the story opens. Then they have trouble leaving one another’s company — any relation to Luis Buñuel’s The Exterminating Angel is worth speculating on.

Someone, usually Foster’s Penelope, can’t help slipping in the knife, as it were. And neither couple wants to relinquish its satisfaction. The fact that lawyer Alan gets an urgent cell phone call every two minutes, or that Nancy is an impatient investment broker, only muddies the waters. Then there’s the Longstreets’ apple-pear cobbler, the bottle of eighteen-year-old scotch, and Penelope’s beloved coffee-table art books. The trappings of civilization hang on them like a necklace of skulls.

Anyone, really, could have directed this, but we’re glad Polanski did because it reminds us of his skill with ensembles. All four actors practice the art of the slow burn, with Waltz finally taking the prize — his scene-stealing in Inglourious Basterds was no fluke. Foster has segued from outsider youth roles to anxious matrons in a way that would have been impossible to imagine for anyone watching Freaky Friday for the first time, never mind Taxi Driver. Reilly is the single most dependable portrayer of “regular guys with a flaw” in American film — the “unflawed” champ being George Clooney. And Winslet can play cutting and abrasive with complete conviction, as anyone can testify who witnessed Romance & Cigarettes. We could watch these people bicker for hours.

Therapy For the Brain

Stay Tuned: California Could Regulate Medical Pot in the Next 36...