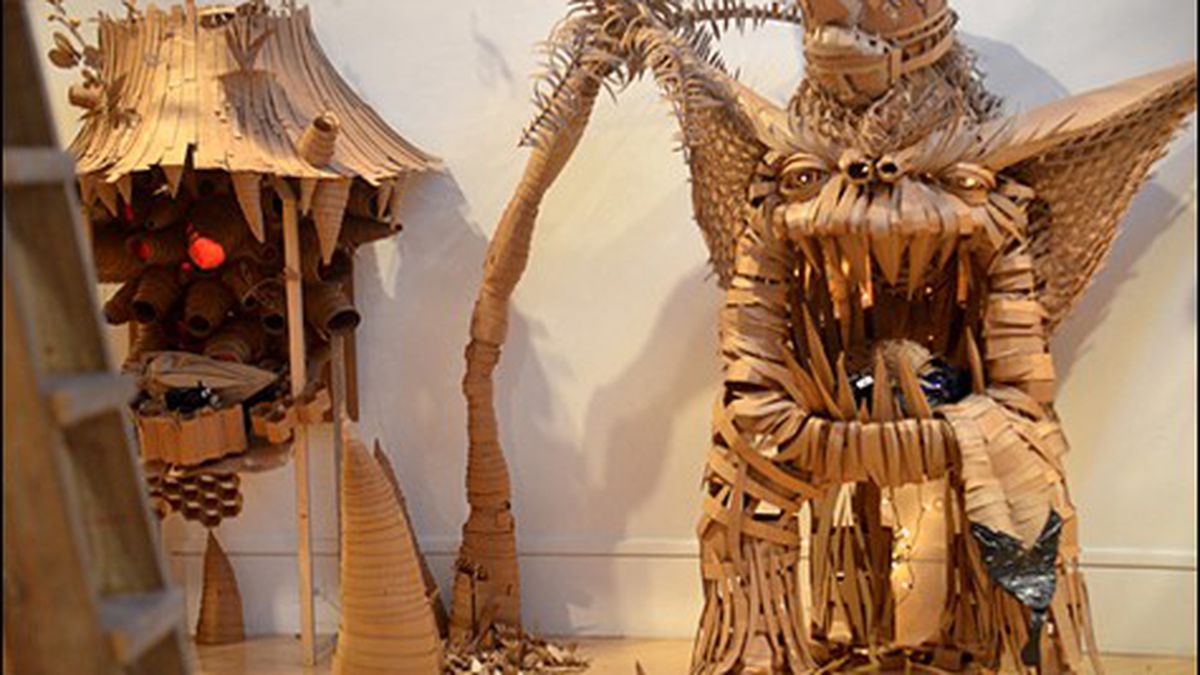 The exhibit at Bedford Gallery is made entirely of cardboard and includes a 25-foot racetrack.

Carrie Lederer has once again set the bar for curating great shows in the East Bay. As the head curator at the Bedford Gallery at the Lesher Center for the Arts (1601 Civic Dr., Walnut Creek), Lederer keeps pushing the envelope of risky displays and innovative exhibits, and does it once again with Cardburg 2012: The Super Track. In this show, Lederer invited the Cardboard Institute of Technology (CIT), a team of four artists who work exclusively with cardboard, to transform the gallery into a cacophonous diorama, resembling a monochromatic, urban landscape — a wonderland complete with a 25-foot racetrack on which radio-controlled cars race each other.

The four CIT artists who built this installation — founding member Joshua Short, along with Michael Murnane, Jesse Wilson, and Joel Stockdill — have been making large-scale installations around the Bay Area for nearly five years. “It’s important that we challenge the white-wall aspect of art,” said Short, who explores the imaginary world of Cardburg in a different way with each installation. With respect to the giant racetrack, Short explained, “The idea is that people become a part of the art. It’s about becoming a part of the mythology of racing, like an analog video game.”

“CIT projects always incorporate aspects of the world we live in — from pop culture, history, and myth to contemporary life,” said Lederer, “and I love that they are using recycled materials and everything will be recycled again, after the show.”

It all adds up to an overwhelming aesthetic experience. Is it art? Certainly. Is it good art? It almost doesn’t matter when it’s this much fun. The medium is striking and unpretentious, even if it’s not that different than elaborate sand castles. But it is great art in the way that it carries no sentiment and revels in its own transience. Whether it stands up as great art in the future, only time can tell.

You can try your hand at your own cardboard creation and add it to the installation at Open Make! on Saturday, July 15, from 2-4 p.m. Kids (or your own inner child) will especially enjoy the exhibit, and someone at the gallery is all too ready to show you how fast one of the remote-control cars can go around the racetrack. Through August 12. $5, free for kids. 925-295-1417 or BedfordGallery.org

Fava Is All About Balance

Your Show of Shows