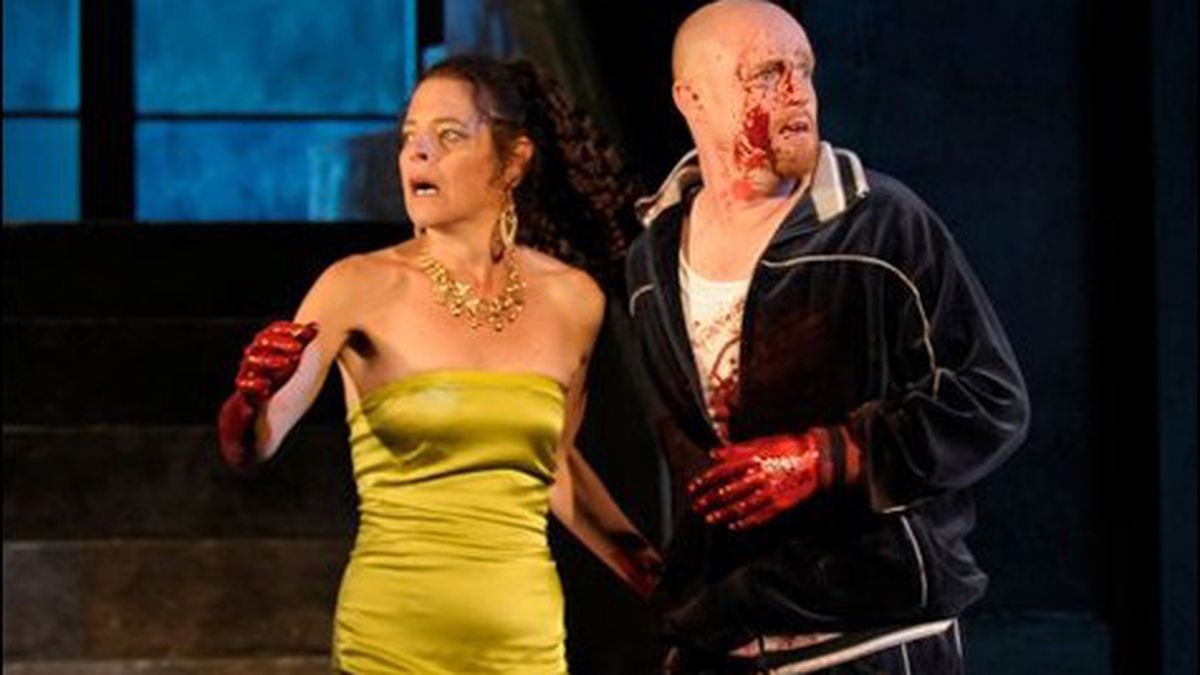 Such are the key elements of Macbeth, now onstage at California Shakespeare Theater, under the direction of Joel Sass. It glitters with violence, even before the first drop of fake blood shines against the gray-green backdrop. Sass and set designer Daniel Ostling had the presence of mind to set this Macbeth in a dingy war hospital that doubles as the witches’ coven and as the protagonist’s home. Thoroughly unsanitary, it befits an evildoer whose desires spread like toxins. The windows have giant gashes; there’s a dirty vanity mirror and a medicine cabinet with tongue depressors and rubbing alcohol. The witches wear nurse outfits and green rubber gloves. Even the colors seem apropos: dull, marsh-green, black, and pewter gray.

Into this world steps Jud Williford, a Cal Shakes favorite and unlikely candidate for the title role. If you harbor any stereotypes about red-haired, boyish-looking actors, then it’s hard to imagine Williford as a cold-blooded dictator who single-handedly destroys Scotland. He seems more at home with a beer and a mayonnaise sandwich, lounging on the roll-away couch, taking abuse from Lady Macbeth (Stacy Ross). The two of them make an odd couple — certainly in the script, and even more so in this production. Williford’s Macbeth is cute, fearful, and lily-livered. He constantly turns to women — usually evil women — for advice and encouragement. He shows up to his own victory party (for becoming Thane of Cawdor) in a velour track suit. He needs to be coaxed into doing things.

Lady Macbeth, in contrast, is a demagogue trapped in the body of a tiny, green-eyed woman. Ross is radiant, and deadly. She keeps her eyes at half-mast, and speaks in a low growl. She wears a series of gowns — one bone-white, one reptilian green — from which her arms hang like long, wiry tree limbs. From the moment she asks the gods to “unsex me here,” you can tell who wears the pants in that relationship.

Ross and Williford set the tone from the moment Macbeth sets foot in his living room and greets his wife, presumably for the first time in months. He has returned a war hero, newly promoted Thane, aspiring king, and seer of apparitions. His wife accepts it all without question. She’s emboldened. The two of them stand on opposite ends of the stage and stare at each other, appraisingly. You wonder how they ever got together.

That’s one of the few pregnant pauses in a play that rattles with line-for-line dialogue. Second only to Hamlet, Macbeth is short but psychologically complex. Like all of Shakespeare’s tragedies, it’s about hubris, betrayal, and ruthless ambition. But it’s also about guilt. Lady Macbeth’s somnambulant scenes and neurotic hand-washing have made her a star of English term papers for decades. She’s a hysteric; a spurned power-monger; a misogynistic stereotype; an obsessive-compulsive. Ross plays the scene in such a stylized way that it verges on camp. Gliding across the floor in a loose dressing gown, she kneels in the basin, scrubs and spit-shines her hands, and lets go a loose, jagged scream. Two orderlies eventually strap her to a wheelchair and cart her off. The move would seem over-the-top were Ross not so capable of playing the mind unhinged.

Ultimately, though, Sass’ interpretation of Macbeth focuses less on character than on societal dimensions. This Macbeth is really about a cruel fascist regime that relies on mass deceit and suppression of dissidents. All the actors wear combat boots, gas masks, and paramilitary gear. There’s an interrogation scene in which Macbeth’s yes-man, Lennox (Nicholas Pelczar) tries third-degree torture techniques on King Duncan’s old messenger, Ross (Delia MacDougall). The massacre of Macduff’s wife and children plays with war-movie brutality, as members of Macbeth’s army kick down doors and shoot into bedrooms.

Sass clearly enjoys the theme, and uses it as a way to make the violence of Macbeth seem socially relevant. But he doesn’t over-indulge. This Macbeth is beautiful without being high-concept. Andre Pluess‘ cold, metallic soundtrack matches the bleak color palette. Sword fights occur in stairwells, and killings happen with curtains drawn. Characters stand on the balcony to importune the gods. Light designer Russell Champa dramatizes the most violent scenes, setting them awash in police-light glow. Brave the cold air of an outdoor amphitheatre and go see it at night. Coldness is part of the ambience, after all.