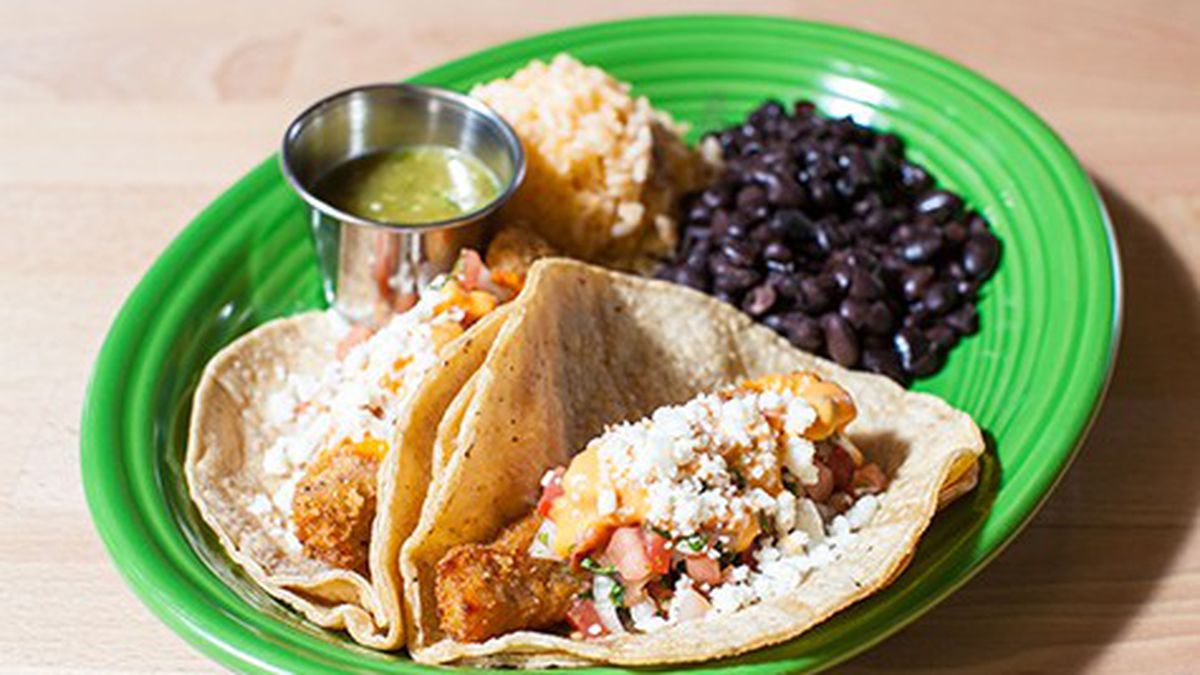 From the outside, Cafe Talavera, a new hole-in-the-wall breakfast and lunch spot in downtown Oakland’s Frank Ogawa Plaza, looks just like any other Mexican deli or taqueria. But what other taco joint serves Venezuelan corn pancakes or the Ecuadorian potato cake known as a llapingacho?

While Cafe Talavera does serve a pretty mean carne asada, it’s far from a taco shop. And it’s the little regional specialties from Central and South America — Guatemala, Ecuador, Argentina, and beyond — that make the place stand out.

Francy Roungreuang owns the cafe, but her mother-in-law, chef Zoila Talavera, is the restaurant’s heart and soul. According to Roungreuang, Talavera was a chef in her native Guatemala for thirty years, then became the chef at Cafe de la Paz, the now-shuttered Berkeley restaurant where she spent another twenty years perfecting her homestyle Latin-fusion cuisine. But Talavera’s cooking doesn’t involve the kind of flashy ingredient combinations that “fusion” usually implies — no Asian-inflected pork belly tacos or high-end variations on ceviche. Rather, one of the restaurant’s signature dishes is its fried mahimahi tacos. Instead of the ubiquitous Baja-style fish taco, with its cabbage slaw and cool lime-infused cream sauce, Cafe Talavera serves a version that combines Roungreuang’s Asian heritage (she’s Lao) — a panko breading — with what she said are Guatemala’s preferred fish taco toppings: pico de gallo, nutty cotija cheese, and a barely spicy, chili-infused crema. The meaty, panko-crusted mahimahi comes out looking an awful lot like fish sticks, but the cheesy richness of the toppings are incredibly addictive. The tacos come two to an order with a side of rice and beans, and they’re a particularly good deal on Mondays, when they’re featured as the daily lunch special, which is always priced at $7.50 and includes an agua fresca.

From there, the menu travels south to Argentina, with a selection of sandwiches dressed with chimichurri, that country’s famous parsley-and-cilantro green sauce. For the sandwiches, the sauce functions as a kind of tangy vinaigrette — a bit too tangy for my taste, but the other sandwich components were top-notch: toothsome slices of Kobe-style grass-fed beef, grilled onions and peppers, and the same toasty torpedo rolls that Mexicans typically use for tortas. The sandwich came with a little side salad flecked with pumpkin seeds and multi-colored tortilla strips (more interesting than the typical pile of spring mix salad greens) and another item that was new to me: a llapingacho, or cheesy griddled mashed potato cake, a specialty of Ecuador.

For a less vinegary experience, get the carne asada quesadilla — high-quality steak and grilled onions mixed with oozy melted cheese. It offered some of the same pleasures as a cheesesteak, but with the crispy edges of a well-griddled quesadilla.

Perhaps my favorite of the “fusion” items were the empanadas, which were Venezuelan-style, featuring a buttery pastry shell that had been baked rather than fried. But the fillings were strictly non-traditional. Skip the chicken-and-jalapeño version, which I found somewhat bland, and go for the potato and bacon version, which was packed with bacon and reminded me, oddly enough, of a New York City street-vendor knish. The vegetarian spinach and feta empanada, on the other hand, tasted just like a Greek spinach pie.

Cafe Talavera is also the only place in Oakland where I’ve seen cachapas, a kind of Venezuelan corn pancake, on the menu. You can order these wrapped around a chicken sausage (pig-in-a-blanket style), or griddled and topped with corn kernels and a dollop of chili crema. The pancakes had a sour note and an off-putting mushy texture, as though the batter was still raw on the inside.

A refrigerated display case is stocked with cups of agua fresca and desserts that are pre-packed in plastic containers — a setup that caters to customers who want to grab and go. The flan Napolitano wasn’t the light, quivery style of custard that’s popular in much of Latin America. This flan was as dense and creamy as cheesecake, and drenched with rich, syrupy caramel. It was a heavy dessert, perhaps best shared with a friend or two if you intend to head immediately back to the office.

I mostly enjoyed my meals at Cafe Talavera, but I ended up missing out on several of the restaurant’s Guatemalan specialties, including the Guatemalan-style mole, which Roungreuang told me is made without chocolate and isn’t spicy, so that what’s emphasized is the fragrance of the dried chilies. Meanwhile, on Fridays the restaurant serves Guatemalan-style tamales that are cooked in banana leaves and feature raisins, bell peppers, and olives in the filling. Christmas may be past, but ’tis the season for these leaf-wrapped masa dumplings.

Some of my favorites at Cafe Talavera were the simplest. During one lunch visit, the soup of the day was a puréed chayote, creamy and satisfyingly savory, dotted with soft little chunks of the pale-green gourd, which reminded me of a cross between summer squash and Asian winter melon.

And the cafe makes for a great breakfast spot, particularly if you opt for the $3.95 desayuno chapin breakfast plate, a traditional Guatemalan breakfast: refried beans, fried plantains topped with cheese and more of that chili crema, and two eggs cooked to your preference and slathered in a delicious tomato-based orange salsa. It comes with a bundle of piping-hot, foil-wrapped corn tortillas so that you can make your own little breakfast tacos.

At those prices, you won’t find many other breakfast options outside of a pastry or bagel sandwich. And, to my knowledge, there isn’t anywhere else in downtown Oakland where you can wash that breakfast down with an atol de platano — the thick, cinnamon-infused, hot plantain drink that warmed me up on a cold December morning. Like so many of the little $2 and $3 items at Cafe Talavera, it was hearty enough to have been a meal unto itself.