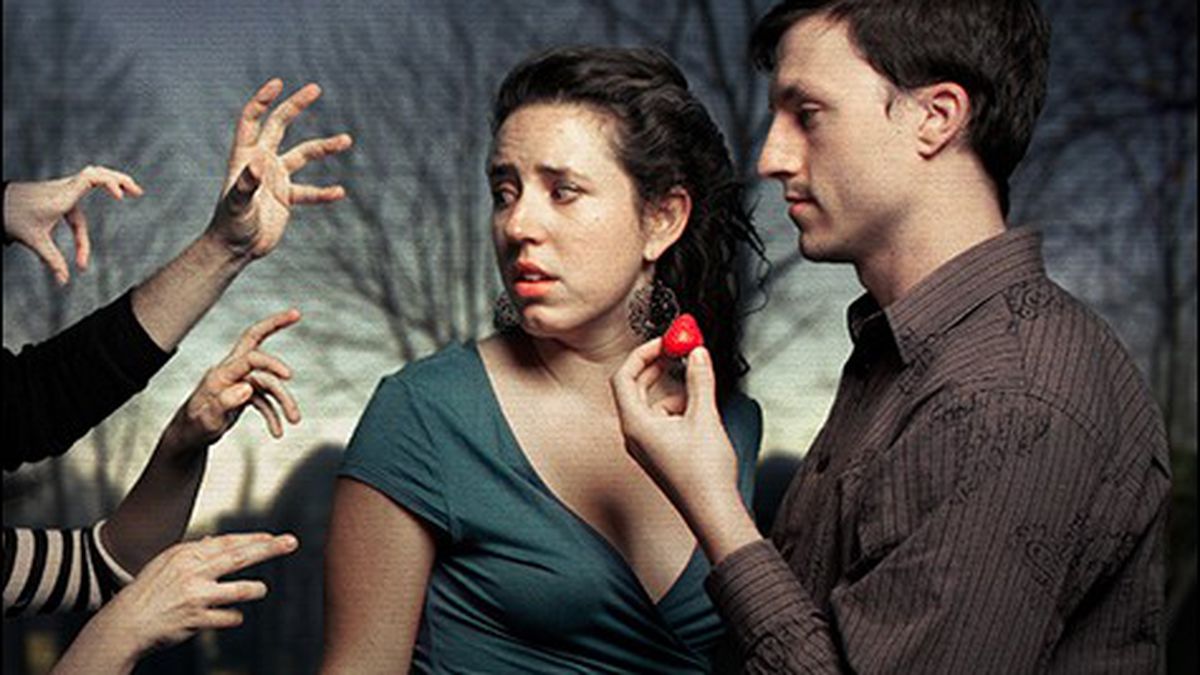 ‘Buried in the Body’ Review: Not Your Typical Theater in the Park

Buried in the Body opens Ragged Wing Ensemble’s 2013-14 season, “Just Ripe,” which promises to explore the always-timely themes of food, sex, and death. Buried, which is the company’s fourth fall festival show, is a theater performance, as well as four experiential installations by local artists. The venue for the show changes three times during the show’s three-week run — I saw Buried in Oakland’s Mountain View Cemetery, on a small patch of grass in front of a mausoleum. It was certainly a unique venue, and aside from a few unexpected annoyances (sun in my eyes, ants in my pants), the graveyard scene suited the play’s otherworldly subject matter.

The transient nature of Buried also fits well with its ensemble’s nomadic existence. But after nine years of rolling stone-dom, Ragged Wing is opening a new, shared, multidisciplinary arts venue this spring in downtown Oakland called The Flight Deck (TheFlightDeck.org). The 99-seat space will be home to the theater company and other local performing arts groups, which is good news for Bay Area theater buffs who are tired of making the trek to Berkeley all the time.

But back to the play. Written by Anthony Clarvoe (Pick Up Ax, Our Practical Heaven at Aurora Theatre last year), the tale involves two former lovers, Lorne (Soren Santos) and Claire (Wendi Gross) who meet in a cemetery for a picnic and to scatter Lorne’s mother’s ashes. Meanwhile, three wandering spirits (Michele Owen, Marlene Yarosh, and Thomas Arndt) possess the bodies of unsuspecting humans when their minds begin to wander. Meanwhile, a middle-aged woman (Jenny Holland) plays live music and sings for money while her baby sleeps in a stroller nearby. Tensions between Lorne and Claire mount when Claire reveals she has the ability to communicate with the dead, and the host spirits nearby start to intrude on not just their picnic, but their minds and souls, too.

The spirits grotesquely pantomime the wants and insecurities of their human hosts, all while espousing advice from their mother (God? A shared ancestor? Mayor Quan? It’s difficult to say). “My mother always said if you’re going to do something, do it well,” they state over and over. All the characters tell overlapping versions of a similar narrative, though it’s spaced out enough to not seem tiresome, which is good because the play is a scant forty minutes long.

Buried takes cues from the ghosts of ancestors past, with the idea that we are haunted by the people who helped create us. “The succeeding generations must reconcile what has been buried in their body by the deceased with the autonomous life they want to live,” writes director Adam Sussman in the program notes. It’s an interesting premise, that our lives in the present run parallel with a past we haven’t lived but also can’t escape, that we are ghosts who haunt ourselves. But the idea doesn’t have much of a chance to come to fruition in such a short duration. The micronarrative is too thrifty to be a proper ghost story, and the repetitive dialogue, while at times capturing the peculiar cadence of alienation in the vein of Samuel Beckett, veered just as often into nonsense. The dramatic minimalism and haunted tone also seemed out of place in the sunny, warm afternoon (though it might work better in the 8 p.m. shows), and much like the spirits kinda had bodies, Lorne and Claire kinda had a story and history and dimensionality, but we only had time to glimpse the surface of them.

The ghosts’ rantings had an engrossing poetic rhythm, at turns incoherent, at others wistful and elliptical, evoking a struggle toward a vast unknown. (Heaven? Hell? Emeryville? It was difficult to say.) As the former lovers work themselves into a fitful and sexy reconciliation, the ghosts go wild and mad, smearing strawberries and wine on themselves as if suffering from a compulsive disorder. The words to the song, “As the Crow Flies,” which are also sung softly just off stage, are repeated by the spirit hosts, both like a mantra and the ravings of lunatics. Despite the raw physicality and the crazy, the play also had a few funny moments as well, which was a welcome reality shift.

The related art installations offer more clues and more repetition — a communal picnic with fellow audience members uses the same foods Lorne and Claire ate, and a “Forest of Memories” displays wooden chunks emblazoned with the play’s dialogue up in a tangle between the graves, for instance.

While Buried‘s themes are a bit stark and ambient for your typical “theater in the park” show, it’s also a novel experience. Plus, it’s short and free, and one of the installations serves chocolate, cheese, and strawberries, which is never a bad way to spend an evening.