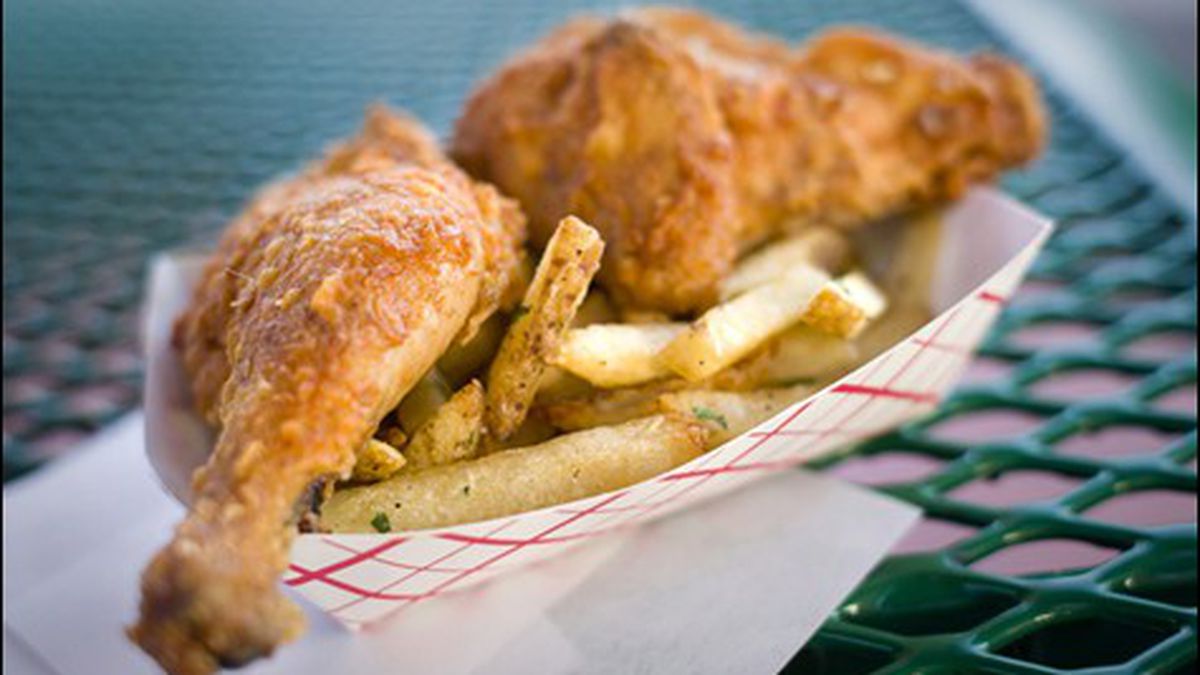 She’s what happens when biker girl turns Asian granny: long hair streaked white, double-XL T-shirt with the words LONG BEACH Endless Summer above a surfer backdooring the tube, and a softly wrinkled face, like a peach left too long on the kitchen counter. Says she’s been coming to the Kwik Way since 1960.

“I had heard you guys had reopened,” she says to the young woman through the order window, then turns to a couple of moms with elaborate braids and polite smiles, waiting for their lunches. “Girl honey, when I used to come here it used to be fourteen cents for a burger, and you could get a half-chicken and fries for fifty-nine cents.” She’s not complaining, exactly, more like testifying: Looky here — Ima tell you how Oakland used to be.

How Oakland used to be. Look hard at the Kwik Way and you get a thumbnail pic of the city over six decades. In the Fifties it was part of a local drive-in chain, one that included the building in Uptown now housing Quarter Pound Giant Burgers, long before its googie splendors became scuffed and faded. But Grand Lake had the Kwik Way, the mothership, with its grand overhang, broad bank of glass, brick pylons hoisting a metal-clad, lot-spanning arch, and neon sign licked by jagged green lightning.

In the days of red-lining Kwik Way’s customers were mostly white; after I-580 slashed through the neighborhood in the 1960s, they were mostly black. Like a wide swath of Oakland’s commons the Kwik Way withered, then closed, though the parking lot continued to thrive — no more cheeseburgers or fried prawns, but a late-night menu of eight balls and front-seat blow jobs, with the roar of the freeway as soundtrack. The pylons: transformed under a Magic Marker filigree of tags, their structural integrity sort of iffy after repeated strafings by trucks carelessly navigating the turns.

Somebody wanted to open a McDonald’s here, then Fatburger made a play, then a developer offered to tear it all down and build condos. But Kwik Way found an unlikely savior, someone who’d forged a connection to Oakland amid the leafy comforts of College Avenue, up where the jogging strollers of Rockridge give way to the double-wides of Elmwood — Somerset‘s Gary Rizzo.

In late 2006, Rizzo cashed out his successful San Francisco diner, turning a chop suey-era Chinese place into Somerset, a neighborhood bistro capturing the remodeled-Craftsman aspirations of well-off North Oakland better than a Sunset photo spread ever could. It was exactly two years ago that Rizzo pulled the trigger on the Kwik Way, which had been dark for a half-decade by then. “It’s amazing that it survived, but it’s an architectural icon,” Rizzo said. “People had so many good memories here; it puzzled me that it sat empty for so long. I saw it as potential — every time I drove by it I thought, ‘This should be reopened.'”

Little did he know he’d clock many more drive-bys as he found his way through the permitting obstacles. Councilwoman Pat Kernighan helped — she showed up for the victory-lap grand opening last month, after Kwik Way’s unofficial launch in April, and a renovation Rizzo describes as “phased.” For now, exterior repairs, a gut-kitchen rehab, and a fresh coat of lime-chiffon paint over outdoor tiles that’d already been covered (the originals: gray, with a blue-dot pattern Rizzo calls unusual — he might strip them later, when he has the funds).

The city said he couldn’t do drive-through, and had to put in outdoor tables (there are five). The ghost of Kwik Way’s old menu still hovers around the place, in the shadow of letters up on the metal arch: Pies Shakes Bar-B-Q. … They give mute expression to Rizzo’s challenge: How to rehab a menu that bears such heavy finger stains of Oakland nostalgia, overwritten with expectations of urban renewal.

Actually, Rizzo sounds pretty cool about the task, fearing only what he calls being seen as “presumptuous,” by which I think he means being seen as consciously foodie. “We’re the Kwik Way Drive-In,” Rizzo said, in a tone that underscored the total lack of fancy-ness of that truth.

I think he’s done a good job with the food’s makeover, Rizzo and his Somerset kitchen managers, who oversee both places. They’re producing a lot of things from scratch, baking all the breads and buns, grinding chuck for the burgers, doing the desserts, and nothing on the menu pokes through the $10.50 ceiling.

There’s a busy palate at work here. Kwik Way aspired for something altogether more embroidered than the plainer archetype that rules at a Trueburger, a Super Duper, or a Shake Shack. The patty’s got plenty of salt, and something else (garlic powder maybe). There are grilled onions and aioli, tomato and butter lettuce — even the focaccia bun’s been seasoned (you can taste the olive oil in it). It’s got good texture, that bun, structure and chew without an excess of volume, though the burger itself — it’s a bit firm, some combination of thinness and aggressive patty-making, probably. Still: not bad, especially considering it’s only $4.25, $4.75 with a slice of white cheddar.

The fried chicken? Delicious. It, too, has a flair for drama. There’s cumin in the flour it’s been dredged in, coriander, cayenne, paprika. You get fleeting whiffs that remind you of something Indo-Paki, though the texture is pure drive-in: big, crunchy blisters slicked with fry oil, finger-searingly hot. Fries are cut here, skins left intact, and fried so the smaller ones crisp through in hot oil. A bag of salty, house-made waffle chips offered the odd soft-centered specimen, but onion rings (the menu asserts they’re “best in the Bay,” failing to say who made the reckoning) were shatteringly brittle, brown, shaggy circles with a thin central vein of sweet, transparent onion. They’re good with the pulled-pork sandwich and its slurry of tender meat filaments and cumin-breathing barbecue sauce, made in house.

Rizzo’s strategy seems to include spanning neighborhoods — I suspect he’s making a play for Piedmont and Montclair as much as for San Antonio. You can get magenta-colored huckleberry lemonade, find a decent version of Cal-cuisine pizza (a squared-off focaccia crust, with Fontina, spinach, and cubes of noticeably lean sausage), or skirt the Fryolator entirely via a half or whole rotisserie chicken that’s marginally better than anything you’d pick up at Whole Foods.

Whether it’s a strategy that’ll ensure the Kwik Way’s survival is an open question. Rizzo says the comments he’s heard have been mixed. “The vast majority is just happy that it’s open again,” he said. That includes gray-haired, sweater-clad Laura Hass, who works up the street at the mailbox store. “It’s cleaned up,” she acknowledged, “and the food’s better.” Then she wrinkled up her nose in an expression as arch as it was wistful. “But those French fries at the old place,” she said. “I loved them because they were just so greasy.”

Will Lawsuits Do What Covid Can’t?