The restaurant founded by Acts Full Gospel Church features stick-to-your-ribs soul food classics and one of the best Sunday buffet bargains in town. 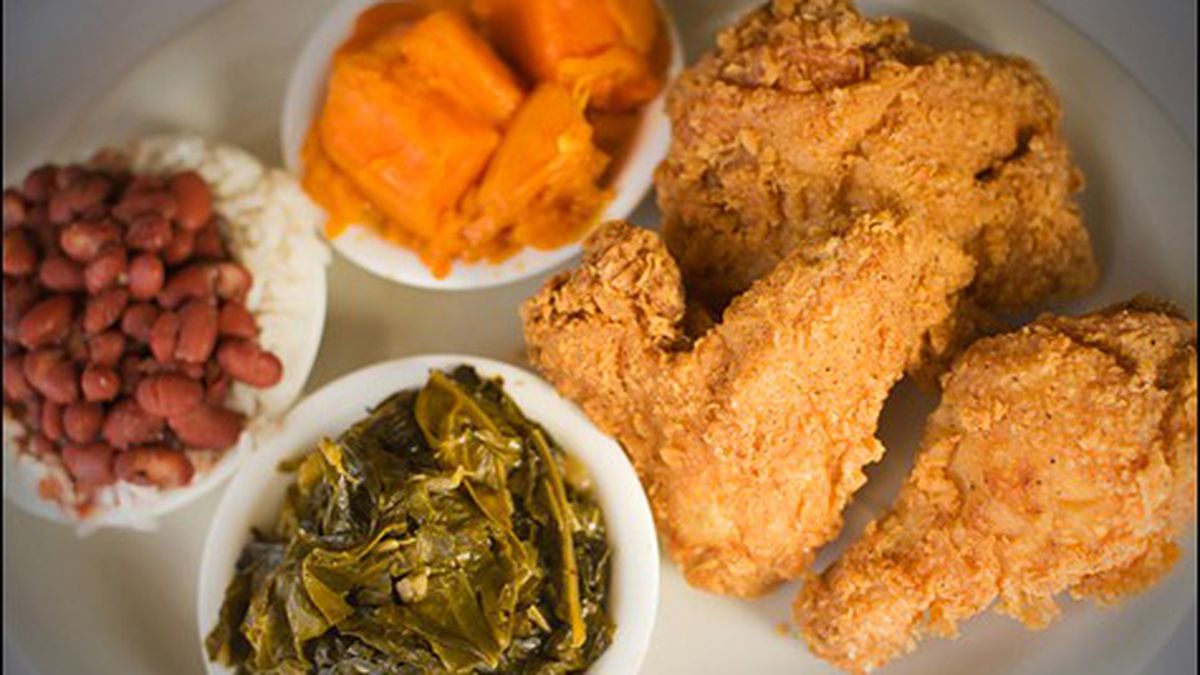 It’s a little before noon on a Sunday at Soul’s Restaurant in East Oakland, and the after-church crowd is here in full force — groups of ten, twenty people who come every week; kids in their good shoes; ladies in hats. The walls of the restaurant are lined with framed posters of important figures in black history — Rosa chilling with Thurgood, Barack, and Booker T. A big inscribed placard reads, “Jesus is Lord.”

The food — served buffet-style on Sundays — is straight-up soul food like someone’s grandma would serve in Georgia or Louisiana: fried chicken and waffles; collard greens and black-eyed peas; mac ‘n’ cheese; and thick, creamy grits. None of it is fussy or especially adventurous, but much of it is quite tasty.

The overall effect, then, is a little bit like a church potluck held at a nice convention center, and this makes sense: Soul’s Restaurant was founded in 2009 by the Acts Full Gospel Church, whose leaders wanted to create a family-friendly, healthier-than-fast-food dining option in East Oakland. Run as a nonprofit, Soul’s is also known for hiring and training ex-felons — participants in the church’s Men of Valor training program. In short, there’s a pretty strong community-oriented feel to the place, with a large part of the staff made up of church members and trainees trying to get back on their feet.

But this isn’t amateur hour. Although it’s pretty far removed from the city’s main commercial hubs, Soul’s is one of the biggest — and nicest — soul food restaurants in town, with plush upholstered seating, a private banquet room, and its own parking lot. The cooks, headed by chef Rose Johnson, are pros (not ex-cons) with years of restaurant experience. (Several of them hail from Louisiana, if you value that kind of stamp of authenticity.)

All this added up to food that mostly exceeded our expectations — even the brunch buffet, which is somewhat of an ignominious institution that I associate with chain restaurants and faceless hotel dining rooms. Soul’s has a little bit of that vibe, with its vast dining area and its warming trays and cafeteria-style service.

But as any veteran buffet-goer will tell you, the key to a happy buffet experience is figuring out how to cut through the chaff to get to the good stuff — the one or two dishes that really shine. (When I lived in Taiwan, there was a Thai buffet I frequented solely for its all-you-can-eat Mövenpick chocolate-chip ice cream.)

At Soul’s, most of the brunch buffet options ranged somewhere between “not bad” and “fine”: Sausage patties, scrambled eggs, and thick white grits inspired neither grumbling nor poetic turns of phrase. The fried potato rounds — lukewarm and limp from too much time in the warming tray — were probably the weakest link. The chewy, thick-cut bacon was pretty good.

My advice, though? Save most of your stomach space for the fried chicken wings: juicy, meaty specimens served whole — tips, flats, drumettes, and all. These had a satisfyingly craggly, crisp outer crust, and, most impressively for a buffet, were served piping hot. Over the course of an hour the kitchen staff brought out three or four fresh trays, filled to the brim, the chicken just minutes out of the fryer.

Also worth ordering are the pancakes, which are included in the price of the buffet ($10.95), though you have to request them from your server separately. These are standard, old-fashioned American pancakes — cooked to order, though, and fluffier and more buttery than you’d expect. I found out too late that there are waffles, too, and French toast and hot biscuits — all available by request.

But one more time so we’re clear: The fried chicken is delicious, and it’s all-you-can-eat.

That in and of itself should be enough to get thee to East Oakland on a Sunday morning — or afternoon, if you prefer, as the restaurant switches over to its even more sumptuous dinner buffet after two o’clock.

Even if you come to Soul’s on a non-buffet day, you need to be prepared to pack in an awful lot of food. The restaurant is closed on Mondays and Tuesdays, but there’s a dinner special every other day of the week — short ribs on Wednesdays, smothered steak on Thursdays. All dinner plates come with three sides, chosen from about a dozen options.

We came back on a Friday night, when the oxtail special was available, and while I’ve rarely met an oxtail I didn’t like, these were an especially satisfying version: eight or nine pieces, cut smaller than usual, unctuous, tender enough to spoon-feed to a baby, and smothered in dark, rich gravy. We got a fried chicken dinner, too — the thighs and drumsticks proving a worthy follow-up to Sunday’s wings. And, wanting to sample all the classics, we ordered a plate of cornmeal-breaded fried catfish — a little muddy-tasting, but plump and moist and good enough with a couple shakes of Crystal hot sauce.

There were nine side dishes between the three of us — nothing short of a feast, though not all of them were good. But there were perfectly cooked collard greens, Thanksgiving-worthy sweet yams, and red beans and rice so creamy and savory that my dining companion wolfed them down before I had a chance to take more than a couple bites.

Look, hipsters: Soul’s Restaurant isn’t Picán, and it isn’t Brown Sugar Kitchen. It isn’t a happening scene. I can’t speak for the provenance of the meat, and it’s possible that a few (but not too many) of the ingredients came out of a box or a can. But it is a family-friendly place that serves honest, unpretentious food.