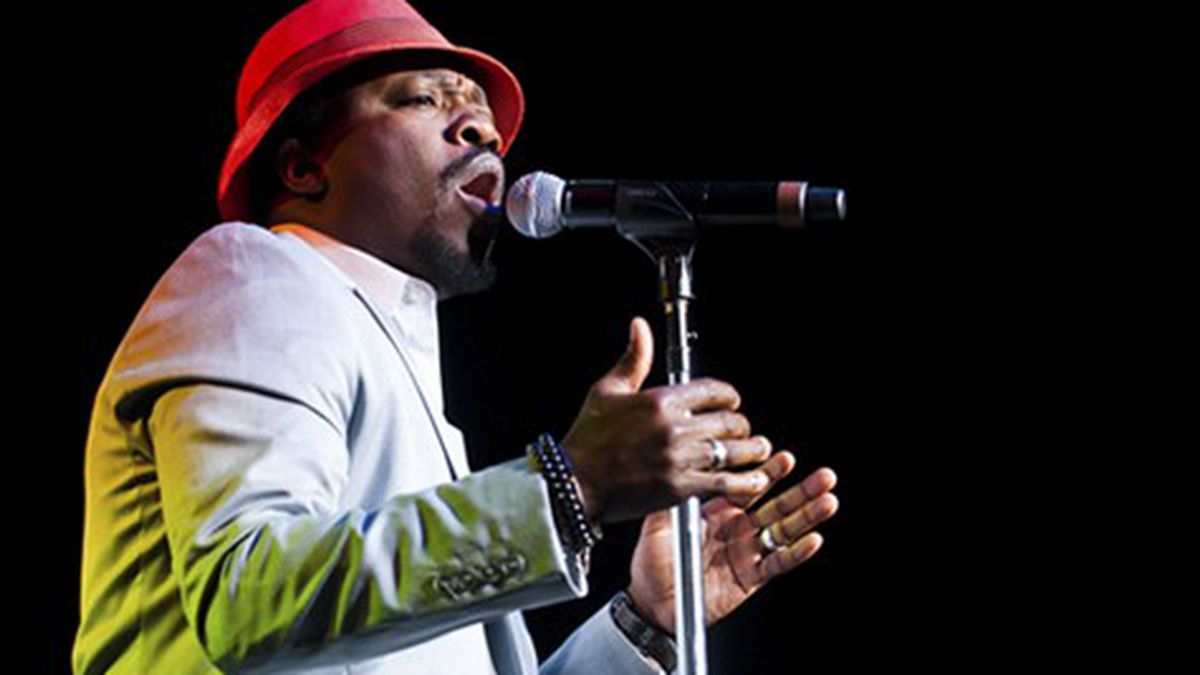 I can’t wait. I can’t wait. I’ll make your body say, ‘Ooh who,‘ Raheem DeVaughn crooned in a high tenor as he sauntered through the predominately female crowd Friday night at Sleep Train Pavilion. The 35-year-old New Jersey soul singer grabbed a pair of panties a fan had hurled at him before stooping in the middle of an aisle to bump and grind his hips to the slow throb of his band’s ballad-tempo beat. After returning to the stage to conclude his brief Budweiser Superfest opening set, DeVaughn removed his tight-fitting tank top to reveal a well-toned torso.

Love ballads also dominated the thirty-minute performance by fellow New Jersey R&B heartthrob Jaheim, third on the brew-sponsored tour’s bill. Handsomely attired in a shiny blue satin dinner jacket and black slacks, the 32-year-old vocalist had his adoring fans on their feet throughout a set that included “Could It Be,” “Finding My Way Back,” and “Put That Woman First.” The latter tune interpolated lines from the 1968 William Bell hit “I Forgot to Be Your Lover,” and Jaheim followed with “Close the Door” in tribute to the late Teddy Pendergrass. The singer’s old-school soul trappings were further highlighted by the subtle foot-and-hand choreography of the four vocalists who harmonized behind him as he soared in ringing tenor tones, his smooth, melisma-rich phrasing bringing Luther Vandross to mind. Before he finished, however, Jaheim had made his way into the crowd and returned to the stage sans shirt. Unlike DeVaughn, his chest, stomach, and arms were elaborately tattooed.

Kem, who doesn’t give his age but is probably in his early forties, remained fully clothed throughout a jazz-imbued forty-minute segment that focused on his remarkable voice and the world-class musicianship of his seven-man band. The Nashville-born, Detroit-bred singer-songwriter emerged seven years ago on Motown Records after having overcome a period of homelessness brought on by drug and alcohol abuse. Like his main stylistic model, Al Jarreau, Kem walks a fine line between jazz and R&B and is a master manipulator of tones, moving effortless between soft, breathy, at times almost feminine sounds and an assertive, decidedly nasal timbre. Dressed in a white shirt and pants, he paced across the front of the stage while singing three mid-tempo tunes nd danced in place while Rayse Biggs blew a darting Harmon-muted trumpet solo on the Latin-tinged “True Love.” Before the tune ended, Kem was standing atop a grand piano, his back to the audience. “I know it’s small, but it’s high and tight,” he said as he wiggled his butt. The self-deprecating comment came as humorous relief to the evening’s earlier macho posturing.

The audience had been rather cool toward Kem at first, but when he sat at the piano to accompany himself on a series of ballads that recalled the simplicity and gentleness of Lionel Richie‘s circa 1980 work, many were on their feet. Particularly stunning was a key change in the middle of “Why Would You Stay” — a song from the just-released Intimacy: Album III, Kem’s first new album in five years — on which he modulated into a higher key during a long sustain without pausing to take a breath.

Headliner Anthony Hamilton had the crowd in the palm of his hands during his hard-hitting closing set. At 55 minutes, it was longer than the others, yet still seemed too brief to fully satisfy the fans. Born and raised in Charlotte, North Carolina, the 34-year-old vocalist has kept one foot in the old-school — recording duets with Al Green and Buddy Guy, for instance — while delving into hip-hop with the likes of Tupac, Nappy Roots, and Jadakiss during a recording career that spans fourteen years. Southern grit, particularly that of gospel quartet music, is never far from the surface of everything he does.

Wearing a gray suit, white shirt, red hat, and red shoes, Hamilton came out kicking with “Fallin’ in Love,” singing in a raspy low tenor over his four-man band’s soul-socking beat. He remained in constant motion, bouncing about in a manner reminiscent of role model Al Green. As if in church, tom toms rolled, the organ rumbled, a tambourine shook, and the background singers moaned at the end of the mid-tempo “Can’t Let Go” before Hamilton announced, “We’re fixin’ to get country now — all the way down South where the grass is green and the girls are pretty.” The band broke into the drum-and-fife sounds of “Prayin’ for You” as Hamilton offered urgently improvised calls to his harmonizers’ responsive riffs as they danced about the stage and then into the audience, bringing a revival meeting-like fervor to the soul love fest.

And, it should be noted, Hamilton also kept his shirt on.

Corrections for the Week of July 24