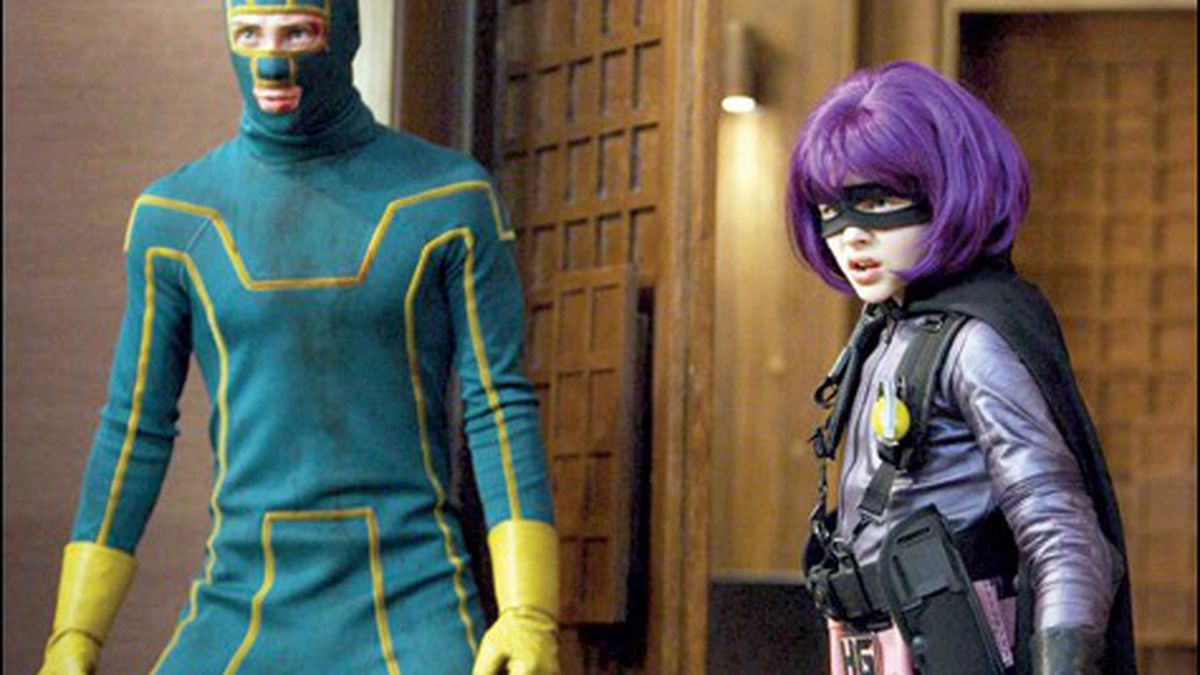 Brothers from Another Planet

Cataclysmic camp with It Came from Kuchar. Revenge of the armed nerds in Kick-Ass.

If the Kuchar brothers had never existed, they would have to have been invented. The world’s cinema culture needs eccentric visionaries like George and Mike Kuchar, twin brothers from the Bronx with billionaire imaginations and $1.98 resources.

Like many would-be auteurs, the Kuchars started young, staging makeshift spectacles for their borrowed Super 8 camera at age twelve. The working-class boys — their father was a truck driver — went to commercial-art high school and dived headfirst into the New York art film scene of the late Fifties/early Sixties alongside Stan Brakhage, Jonas Mekas, and Andy Warhol.

They shared with other “underground” creators of the day a taste for improvised-looking scenarios, amateurish but spirited playacting, and flamboyant, often lurid subject matter. They were shoestring Cecil B. deMilles, “the Mozarts of 8mm cinema” (a sobriquet hung on them by screenwriter Buck Henry), charting epic concepts on cardboard and papier-maché sets. Their films were obsessive even compared to those of their heroes, Douglas Sirk and Roger Corman. It would have been fantastic to see what George and Mike might have come up with if they had been given the chance to make, say, The Ten Commandments with a Paramount budget.

But part of the Kuchars’ genius lies in avoiding the fast track. Despite producing more than 200 films since 1956, George (he teaches at the San Francisco Art Institute and lives in the Mission district) and Mike (also an SF resident) are almost completely unknown to mainstream audiences who worship such lesser talents as Michael Bay and James Cameron. The insanely prolific Kuchars don’t know how to make cash cows, but there’s something undeniably sexy about their filmography when it’s stretched out at full length in the moonlight.

The titles alone are pure poetry, enough to inspire wet dreams and hallucinations: The Craven Sluck, The Devil’s Cleavage, A Reason to Live, I Was a Teenage Rumpot, Anita Needs Me, Corruption of the Damned, A Town Called Tempest, Lust for Ecstasy, Bayou of the Blue Behemoth, Hold Me While I’m Naked, Temple of Torment, Eclipse of the Sun Virgin, Pagan Rhapsody, Wild Night in Reno, Prisoners of the Prairie, Curmudgeon of the Campus, The Fury of Frau Frankenstein. And the list goes on.

Jennifer M. Kroot met George Kuchar in one of his classes at the SF Art Institute, and his influence helped shape her subsequent films such as the campy sci-fi satire Sirens of the 23rd Century. It Came from Kuchar is Kroot’s tribute to the brothers, now in their still-productive sixties – and she has plenty of company in singing their praises. The 2009 documentary, which made its Bay Area debut at Frameline 33 last summer, peppers the parade of outrageous greatest-hit clips with talking-heads testimony from an impressive group of admirers.

Writer Henry contrasts Mike and George’s style and point of view with conventional “avant-garde” filmmakers who are “hip and cool and seriously devoid of affect. The Kuchars were all affect.” Director Wayne Wang confesses that a Kuchar film once brought him to tears. To director Guy Maddin, the brothers represent the antithesis of a studied lack of narrative incident: “In their films, everything happens.” John Waters claims he, too, was Kuchar-inspired, as do fellow director Atom Egoyan, critic B. Ruby Rich, pop-culture analyst V. Vale, and Zippy the Pinhead cartoonist Bill Griffith. The theory is advanced that Barbarella lifted motifs from Sins of the Fleshapoids. No doubt there were more borrowings — this school of filmmaking doesn’t worry excessively about intellectual property rights.

The Kuchars themselves are fairly nonchalant in on-screen interviews about their careers, both as a team and separately. George continues to produce costumed mini-blockbusters with his students. He collaborated with the late Curt McDowell at the Roxie Cinema for McDowell’s 1975 horror-porno spoof Thundercrack!, and his Weather Diary series of the 1980s eschews hysteria to gaze up at the sky. Meanwhile, Mike’s 2009 film Dumped!, written with Deirdre McGill, riffs on a marital triangle masquerade.

The first thing anyone emerging from It Came from Kuchar wants to know is: Where can I see more Kuchar Bros. films? The short answer is that mostly you can’t. George contributed to Troma Films’ 1985 anthology Screamplay, now available as Video on Demand, and Sins of the Fleshapoids and Thundercrack! can be found in the DVD after-market, but after that the pickings get slim. Outside of joining one of George’s classes or searching out rare museum screenings, Kroot’s endlessly entertaining labor of love is the easiest way to experience a glimpse of the full Kuchar. Don’t miss out.

Matthew Vaughn’s comic-book adaptation Kick-Ass is mostly for the fan boys, but fan girls are invited, too. Nerds of all ages should be able to relate to the story of Dave Lizewski (played by Aaron Johnson), a mild-mannered sort who goes to the most suburban-looking high school in New York City. Tired of constantly being jacked for his pocket change, Dave ill-advisedly sends for a superhero costume and becomes Kick-Ass, the masked avenger who doesn’t know how to fight.

Lucky for him, not far away live a cartoonist named Damon Macready (Nicolas Cage) and his pre-teen daughter Mindy (Chloe Moretz). Damon’s studio looks like the squad room of the NYPD SWAT team — the walls are bedecked with state-of-the-art weaponry, the better to help daughter and dad in their alter-ego crime-fighting mission as Hit-Girl and Big Daddy. Mindy sports lethal martial arts moves, and when that doesn’t work, Damon blasts the bad guys.

Complicating all their lives is the presence of criminal boss Frank D’Amico (Mark Strong from Sherlock Holmes and The Young Victoria) and his crew of inept thugs. And complicating Frank’s life is his son Chris (Christopher Mintz-Plasse of Superbad), a total nerd like Dave, but a total nerd with money and a mafioso father. Intent on topping the sudden notoriety of Kick-Ass, Chris adopts the secret persona of Red Mist, who cruises the streets in his cool sports car, essentially at cross purposes with the family’s illegal operations. With his lopsided wig, Red Mist is the fruitiest superhero in a metropolitan area already overcrowded with caped crime fighters. Fisticuffs and ironic laffs ensue.

Cage continues to mine the flawed-character vein he tapped so successfully in The Bad Lieutenant: Port of Call — New Orleans. Dig his James Stewart impersonation. And both child star Moretz and perennial juvie Mintz-Plasse dig deeply into what are essentially stock figures. The scenario, adapted by Jane Goldman and director Vaughn from Mark Millar’s comics series, may have pimples, but it doesn’t need braces.

Salt That’s Not of the Earth