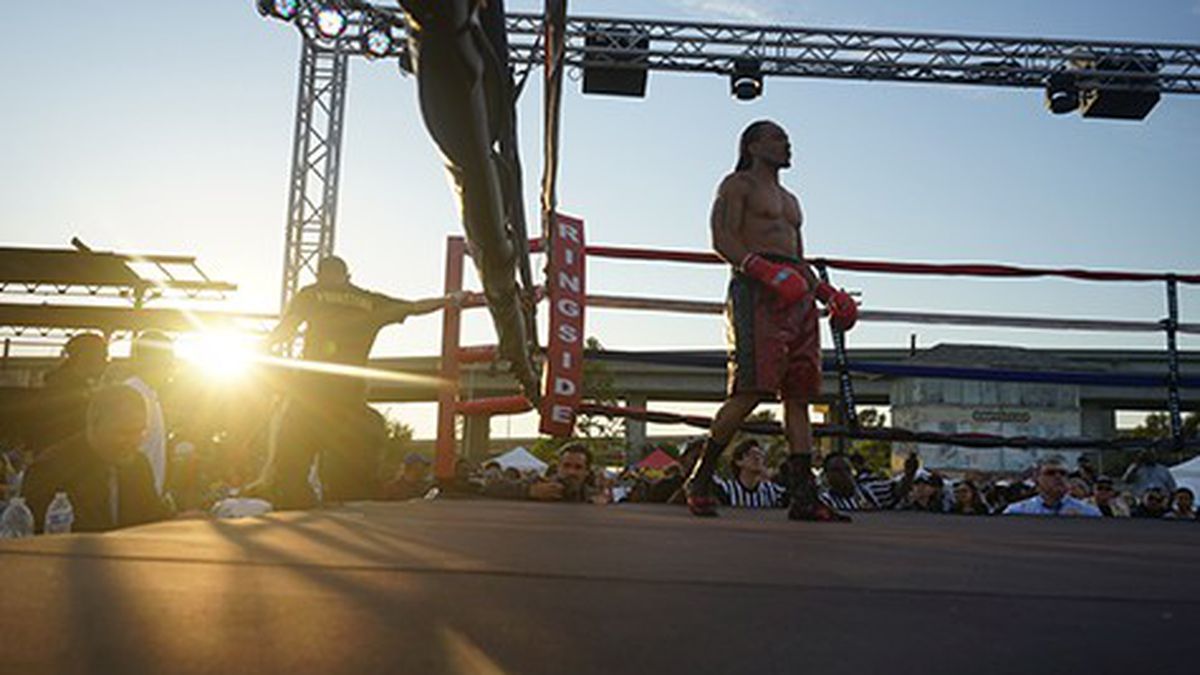 A recent boxing showcase at a defunct West Oakland train station captured the historic spirit of the site.

On Saturday June 11, Osric Pratt Promotions presented Unfinished Business, a showcase of Northern California boxing culture at the historic 16th Street train station in West Oakland. The event consisted of seven boxing matches, interspersed with hip-hop and poetry performances. It was one of those rare, warm Saturday evenings where no fog rolled in. At one point, old school Oakland rapper Richie Rich came out and performed his hit songs, and the majority of the crowd sang along, word-for-word. There were fighters from Sacramento to San Mateo, one boxer from as far as Philadelphia, Pennsylvania, and one true native from the Twenties in East Oakland. The fighters were professionals, with entourages in the crowd, nicknames stitched on their shorts, and ringside gimmicks — like boxer Pedro Moreno, who walked to the ring accompanied by a guy in a full chicken suit. The crowd was of all ages and races; there were models and entertainers present. The dirt and concrete in front of the defunct train station was covered by rows of chairs, vendors, and a pro boxing ring. It all came together to look like one of those scenes from a big-time boxing movie.

And the setting, the historic station, is sacred ground for so many reasons.

Constructed in 1912, the building was the western terminus of the Transcontinental Railroad. It served as a portal to a brighter future for masses of African-American people who migrated from southern states during World War II to work at the Port of Oakland, in local factories, or at the train station itself.

Although trains haven’t run through the station since the 1990s, the seemingly inactive building still plays host to a number of small events and projects. There’s an urban garden in front of the site and the property often serves as the backdrop for photo shoots. Oakland Mayor Libby Schaaf held her fiftieth birthday party there. On past Halloween nights, it has been transformed into a haunted house. And a decade ago, in the midst of the Hyphy movement, high-powered cars swung donuts as kids went dumb during the famous “Tell Me When to Go” video shoot.

But the neighborhood around the station is changing, with high-end condos popping up in formerly vacant lots punctuating rows of old Victorians. And the station is poised to change as well. On the 16th Street Station website, under a tab titled “The Future,” there’s a list of potential development ideas including: café, museum space, charter school, beer garden. In a recent phone conversation, a representative from Bridge Housing, the developer that currently owns the building, said that the company is currently in negotiations to sell the building, but nothing has been confirmed.

Although the building is currently covered in graffiti, the walls are cracked and the pipes are rusted, it’s still a jewel. And as West Oakland changes, it’s important to document the way it once was — even if just for one glorious night of boxing matches.