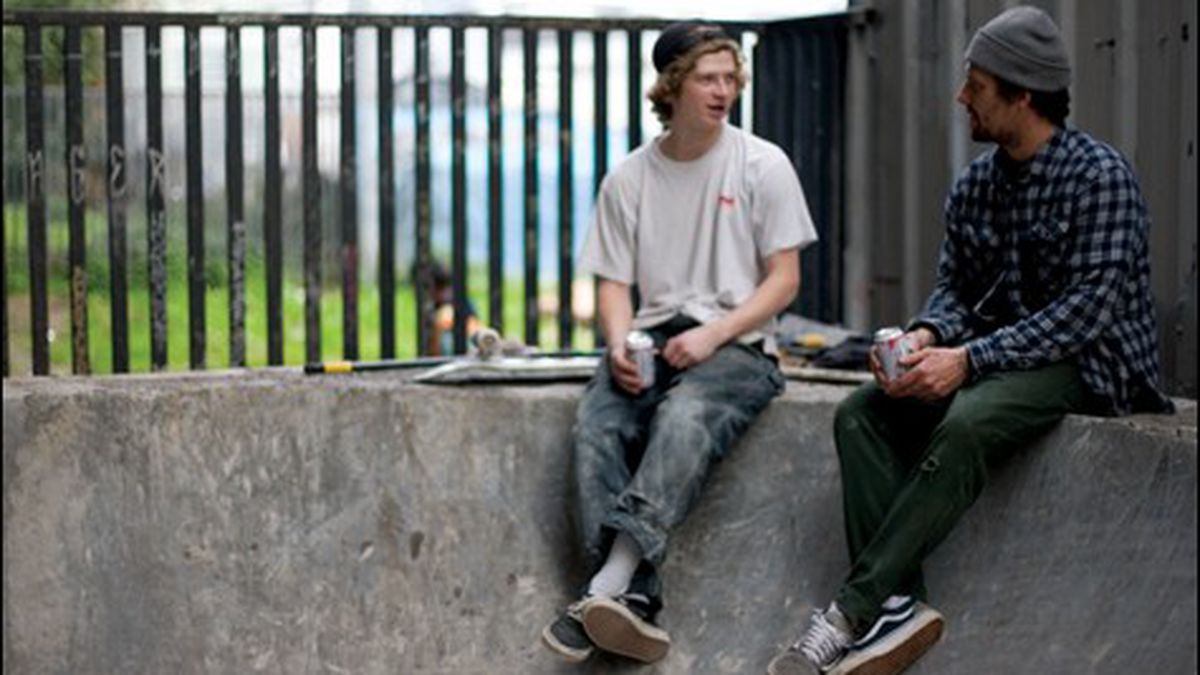 Skaters try to stave off demolition of a beloved DIY skate park.

Skateboard wheels grind down a wooden half pipe at all hours of the day in Josh Matlock‘s living room. He lives in a North Oakland warehouse with four other guys and a rotating cast of squatters. There’s a large loft, a common area with video game consoles, and a patio outside with an awning made of corrugated plastic. On a recent Saturday morning, the smell of scrambled eggs and ketchup wafted from the kitchen. Matlock was cooking breakfast and making Bloody Mary cocktails. Minutemen songs blasted from the living-room stereo.

The skaters were gearing up for a house party and show that afternoon. They’d ordered a keg and planned to solicit donations at the door. Proceeds would benefit Bordertown Skate Park, a large concrete bowl they built beneath a 580 freeway overpass at 34th and Louise streets, in Emeryville. They had leased the property from Caltrans — by way of the City of Oakland — for five years, but when their lease expired in September, Caltrans started issuing trespassing tickets. Five years since the original battle for Bordertown, the skaters were back in a deadlock, trying to stave off the park’s demolition.

When Matlock discovered the Bordertown site in the summer of 2004, it was a dumping ground and hangout for drug addicts. With the help of two friends, Justin Demmon and Tony Miorana, he amassed a small army to clean it up. “We were thirty deep, all kids with backpacks,” Matlock said. They filled giant trash bags with detritus. Then Matlock bought a concrete mixer and pallets from a lumberyard where he worked. The skaters dug out the ground and burned trash at night, mixed concrete on Sundays, and kept a rigorous schedule. The kids hand-mixed their own cement by running a hose fifty feet from an unused water outlet on Louise. They also gathered water from puddles. “We’d just get buckets and recycle everything,” Matlock said. “You know, keep it green.”

Within months, they’d built a large, amoeba-shaped bowl right into the pillars that connect I-580 to the ground. Skaters came at all hours of the day and night, ollieing on the rim of the structure as cars whooshed overhead. They made peace with the homeless people who lived there. They endeared themselves to some of the local business owners, who said that crime decreased in that neighborhood after the skateboarders cleaned it up.

A year passed before Caltrans got wind of the park, and by then it was well-known in the skate community. Transportation authorities immediately threatened to shut the place down. But against all odds, the Bordertown gang marshaled a surprising amount of support from Oakland city officials. They encouraged TV news stations and local publications (including this one) to cover the story. They elicited sympathy from city councilman Ignacio De La Fuente and Senator Barbara Boxer, who wrote a heartfelt letter to Caltrans District 4 director Bijan Sartipi. She championed the skate park as a clean, wholesome, recreational site in a neighborhood with scant activities for youth.

Lobbying powers aside, the skaters were absolutely determined to make their park legit. They persuaded the city to lease the property from Caltrans for five years, and sublease it to the Bordertown nonprofit they formed at no cost. In the meantime, Matlock, Miorana, and company invested $3,000 for a building permit and $700 for zoning. They paid an engineer $14,000 to draw blueprints — which are now tacked to their living-room wall — and bring everything up to code. They got the soil tested for toxins and monitored the thickness and compaction of the concrete. “We laid everything out so Caltrans understood what we’re doing,” Miorana said. Then they threw in $2,500 for a $25 million liability insurance policy. Matlock financed some of it using his personal coffers, and from contributions by friends and random donations. They stand to lose a sizable investment if the park gets shut down. That’s still nothing compared to the sweat equity that went into Bordertown.

But now, the stakes are higher and the future looks grim. Caltrans didn’t return calls before press time, but the skaters speculate that the agency wants to shut down Bordertown for trespassing and building without permission. Meanwhile, Miorana says, “the city backed out.” Ignacio De La Fuente’s office is no longer returning e-mails about the park, Matlock said. The skaters no longer have a bulwark behind them.

Undeterred, a group of skateboarders hopped the fence at Bordertown last week and got busted by Caltrans authorities. Everyone got tickets. The site has always been fenced in, but now it’s desolate. Piles of trash and broken glass are accumulating below a twelve-foot fence on the south end. It bears a sign with the words “State property. No parking. No dumping. No trespassing. Violators will be prosecuted.”

In her letter to Sartipi, Boxer hoped for “a constructive resolution of this important matter without undue delay or red tape.” Recalling that line, Miorana smirked. “It’s just been red tape the whole entire time,” he said.

With a fence in place and Caltrans refusing to budge, the future of Bordertown looks dicey. So the skaters began shifting their focus to other, more promising enterprises. In the last four years, Matlock and Miorana managed to parlay the success of Bordertown into paid gigs; they now build skate parks for a company called Grindline. Meanwhile, they’ve continued guerilla operations. In the spring of 2007, the Bordertown posse built another park at the Albany Bulb using rocks, sand, and construction debris that they gathered on the beach. That got torn down in 2008. Last year they found a new site on Wood Street in West Oakland, just blocks away from Bordertown. They quickly staked claim on the place, building cement “volcanoes” with rainbow-arch rails on top. A lot of the materials were scavenged from parks they built in other cities. They named it “The Spot.”

The Spot is secluded, right off a dead-end street that’s crisscrossed with railroad tracks. Freeway arteries corkscrew overhead. One pillar bears a “State Property” sign exactly like the one at Bordertown. Others bear graffiti. An elaborate skull-and-headdress drawing lies several feet behind a huge heart, with the initials “R and D” etched in. Nearby is a warning, inscribed in light blue lettering: “Respect the Spot.”

Apparently, it’s been effective. For the time being, at least.