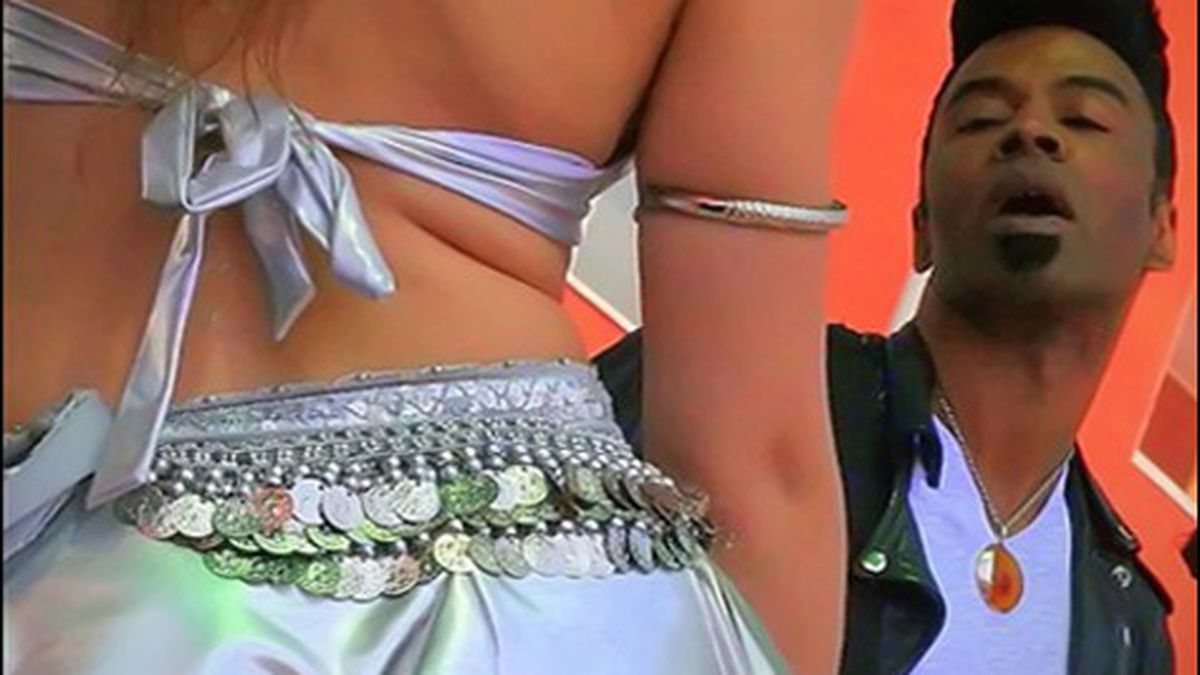 Judges at the annual Sugar Booty Pageant supposedly adhere to a rubric, and it’s about “half sugar, half booty.” So said Gina Hall, who co-manages RonKat Spearman’s Katdelic band, which hosts the event at San Francisco’s Boom Boom Room. The idea spawned from a Katdelic song of the same name, but it’s since taken on a life of its own. Thus far, Katdelic has held two such pageants in San Francisco — the second happened last Thursday — and RonKat now aspires to tour it nationally. After all, ass appreciation isn’t exclusively a Bay Area thing.

And sometimes, Hall said, the “sugar” wins over the booty. At least that’s what happened last year, when Aimee Ellis — aka “Miss Tangerine” — wowed the panel with her sweet smiles and perfect pirouettes. She was, in fact, trained in the Katherine Dunham technique, and works professionally as a dance instructor. Swift moves made her a strong contender, but charm really clinched the win. “My understanding,” Ellis said, “is that they were looking for a girl with good timing who was fun and fabulous.” In other words, it’s not just about having a low center of gravity.

Hall concurred: “She has a nice booty, but the sugar really won out.” And Ellis, who is now eyeing the more mainstream Miss San Francisco pageant, turned out to be a model crown-wearer: “She took her duties very seriously.”

“Duties” might be very loose in this sense, but they seem to include a lot of grinning and strutting around, along with mandatory appearances at every local Katdelic show for the next year, in full “Miss Super Booty” regalia (meaning: sash, gown, tiara, and stripper shoes, said Boom Boom Room owner Zander Andreas, who always sits on the judge panel). Also: the promotion of world peace.

That was the catchphrase at last week’s pageant, when six contestants, all bearing fruit names, battled for supremacy. Zander sat at a makeshift dais with rose garlands, alongside the other two judges: Trannyshack performer Trixxie Carr and celebrity guest George Clinton. Their credentials were obvious. Zander has ultimate authority because he owns the joint, and because he’s a third-generation native San Franciscan and self-proclaimed booty expert. Trixxie Carr is the author of several appropriately themed songs, including “Rotisserie Booty.” And George Clinton — well, he’s probably the funkiest seventy-year-old alive, and possibly better suited to booty-judgment than last year’s guest, Jello Biafra.

Maybe that’s a point of contention. “Here’s my blanket statement: They’re both ass-lovers,” Zander said, matter-of-factly. He paused and chewed on the thought for a moment. “Jello was more cantankerous and critical, but you know, he’s such a tongue-in-cheek son of a bitch.” In contrast, George Clinton was pretty exuberant from the jump. “George, well — right from the get-go, I think it was a Viagra pill for him,” Zander said. “Because he got onstage and just started screaming out ‘Ass!’ ‘Booty! Booty!’ I’m glad I wasn’t sitting next to him, it might have been uncomfortable.”

So by all measures, the second Sugar Booty Pageant was a more decorous occasion than the inaugural event last year. That said, “sweetness” still won out over buttcakes. The whole concept that animates the contest is pretty tongue-in-cheek but the format is actually much like a traditional pageant. And funny as it sounds, traditional pageant skills still apply. This year’s winner, Miss Plum, didn’t necessarily have the best ass. But she did have the best stage performance.

That was apparent from the second round, a brief Q&A to gauge the contestants’ personalities. The questions followed a pretty standard format — e.g., “If a genie flew out of a bottle and granted you one wish, what would it be?” Answer: “World peace.” Or: “What do we need more of in this world?” Answer: “World peace.” Also: “What do they use ass for on the mothership?” Answer: Blank look. Pause. Then — “I think the answer is world peace.”

So went Miss Pear, Miss Pineapple, Miss Raspberry, Miss Nectarine, and the peculiarly long-winded Miss Passion Fruit. But Miss Plum’s response made her stand out. Asked to articulate her own personal credo, she said, “It’s not about the booty on the outside. It’s about the booty on the inside.” Which of course led to speculation that Miss Plum has an inny-outy booty.

Nasty. But George Clinton seemed pleased, as did several enthusiastic members of the audience. And the dance contest helped cement her position. While Miss Pineapple wooed the audience with her little black tutu, and Miss Nectarine pulled out a hula hoop, Miss Plum went all the way old-fashioned, taking the stage with a white-tipped cane, ripping off her skirt and blouse, and ending the performance with a perfectly-executed cartwheel into the splits. From that point on, she was a shoe-in.

In fact, it’s no small thing to prevail at a contest of this nature, said Zander, who is pretty gung-ho about taking the pageant on the road. He says that all Sugar Booty applicants go through a fairly elaborate screening process, and that most of them are hand-picked — usually, they’re friends of previous contestants. “It’s not just about, ‘Wow, she’s got a great ass and she’s beautiful,'” he explained. “She’s actually gotta have personality. And weird as it sounds, she has to have some integrity.” Not to mention savoir faire.

Thus, the judging process is fairly comprehensive. In all, there are three rounds. The first requires each competitor to strut down the catwalk (or “katwalk”) in formalwear (the definition of which is pretty loose, in this context). Then there’s the Q&A. Then there’s the booty portion, during which everyone does an original dance routine in hot pants, booty shorts, lingerie, or whatever bathing suit-equivalent best displays her (bad pun alert) assets. The judges add up and average out their scores, and then determine the winner after several minutes of backroom deliberation. That meant Zander had to step into a closet-sized office with Trixxie Carr and George Clinton and have what he later described as “one of the best conversations of my life.”

But it all turned up in the end. (Sorry.) Miss Plum, Jewelz Moyer, earned a noble title, two dozen red roses, a sash, a handmade crown, cash prizes from local salons and chiropractors, accolades from the more than 250 people who showed up to Boom Boom Room that night, and a full shot at glory. Trixxie Carr got to dance on the bar during halftime, twitching both butt cheeks and lip synching the words to “Rotisserie Booty.” Zander got to pack the club. Katdelic got to perform a long funk set, starting at 11 p.m. and going way late (since Boom Boom Room has one of those cool after-hours permits). And George Clinton? Well, he got a little something, too.

“I was hoping there weren’t any fruit flies,” Zander said. “His mouth was open the whole time.”

4/20 at Harborside Health Center (and Elsewhere)