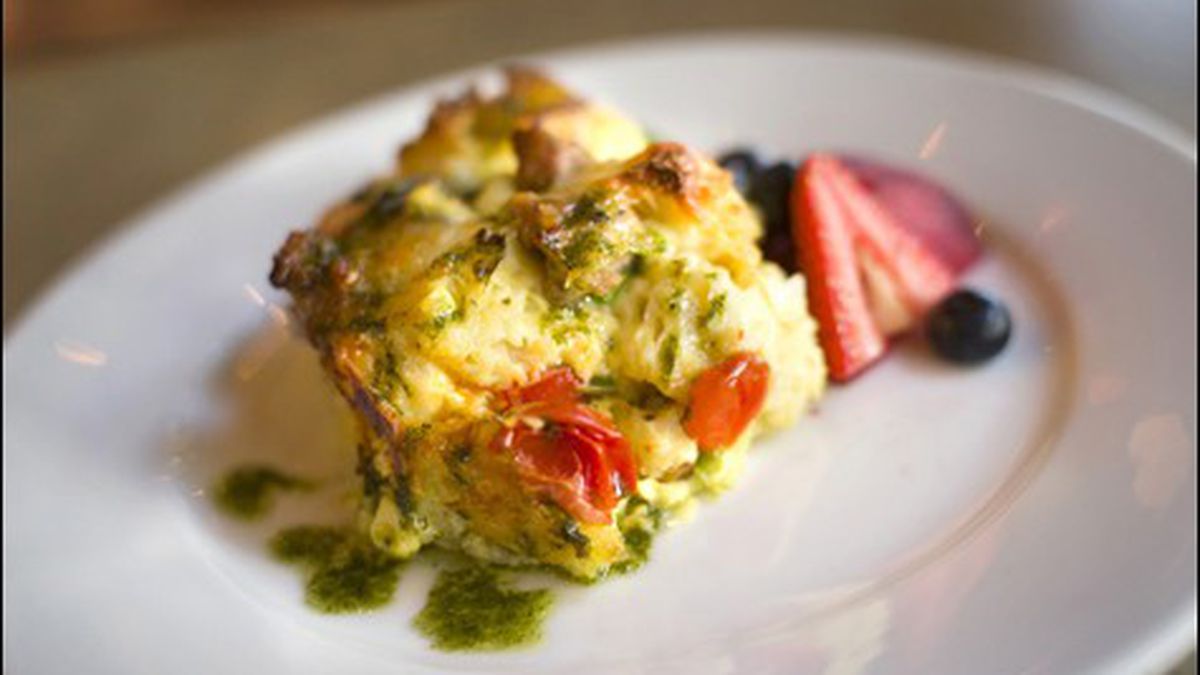 I cooked in restaurants for a dozen years, then worked for caterers, so many days in so many kitchens I’ve lost count. A lot of those days, if I worked an early shift, began with staff breakfast: Juan or Baltazar or any of the other morning prep guys taking a lump of last night’s deflated, beery-smelling dough from the pizza station, smearing it with butter and brown sugar and coming up with sweet rolls. Or beating together a mess of eggs with chopped-up pepper tops, nubs of leftover sausage, and odds and ends of cheese to yield a frittata big enough to feed half a dozen murderously hung-over workers, some of us residually drunk or high if we were tasting the raw, early-morning lining of back-to-back shifts.

If you measure a cook’s success by his power to comfort, to restore — especially directly, with as little mediating in the form of menus, servers, and studied plating — then those impromptu breakfasts were brilliant. Seriously.

Perched on a stool at Boot and Shoe Service recently one morning, just after 9 — smelling the new-lit fire in the pizza oven, hearing prep cooks talking random shit — my pre-coffee brain flickered around memories of those improvised staff breakfasts. Boot and Shoe and Paisan, in Berkeley, are two restaurants that recently began offering breakfast, something more elaborate than pump pots and a stack of paper cups, but simpler than omelets and French toast.

And while I wouldn’t call them brilliant in the same way as those staff meals of my restaurant days, both offer some whiff of early-morning floor mat (metaphorically, I mean) to make them occasionally worth swearing off cafes for. The naked informality somehow make you feel part of the inner workings of the restaurant, even only passively, like sitting at the counter at Paisan and watching the prep guy on the other side shave a whole pan of onions into thin, perfect rounds on the meat slicer. By the end we were both crying. It was a moment.

Paisan sets up a serve-yourself pastry line on the bar — morning buns, muffins, scones, biscotti, and clafoutis-like polenta berry cakes from Artisan Bakery (like Paisan, part of the K2 Restaurant Group that also owns Sea Salt, Fonda, Lalime’s, and others), though doughnut holes are fried on-site.

There’s decent Blue Bottle drip (three African blends, if you’re the kind who notices); a sandwich of scrambled egg and Niman ham; and a fluffy, savory, pesto-drizzled pudding called a strada that gets all of its textures right, from the cloudlike amalgam of egg and bread to chewy bits of bacon and pizza sausage.

Still, here in the East Bay, you have to give Pizzaiolo/Boot and Shoe owner Charlie Hallowell most of the credit for pioneering the kind of cafe component Paisan is trying out.

Hallowell created the format for opening early for coffee and pastries at Pizzaiolo back in 2007. Maybe “format” isn’t exactly right, since the place just opened. No busser to pick up cashed cups, no cheery girl at the host stand, just well-made espressos, toast, and Blue Chair Fruit Co. jam. When pastry chef Kiri Mah started frying buttermilk doughnuts, Temescal’s secret morning hangout suddenly turned into the local food media’s find, with the result that these days it can be hard to find a seat, even on a Tuesday.

For Boot and Shoe Cafe, Hallowell took notes, clearly, from the scene that grew up organically at Pizzaiolo. This summer Hallowell officially launched coffee and pastry service in the old Cafe DiBartolo storefront, shuttered since 2009, when Boot and Shoe’s pizza oven ignited in the DiBartolo restaurant space next door, and remade as a neatly deconstructed piece of urban design, all exposed brick, Heath tiles, and raw or painted lumber, stacked up Jenga-style. (A back patio with the same lumberyard aesthetic opened just last week.)

Breakfast happens till noon, when things shift over to lunch till 3 (future plans reportedly call for using the cafe as bar and restaurant spillover, with drinks and little bites, charcuterie plates, etc.).

Hallowell has refined the coffee service here — Pizzaiolo still uses Blue Bottle, but Boot’s gone Sightglass, the South of Market cult roaster. I’m glad he did. In July I tried an espresso pulled from Sightglass’s constantly changing Owl’s Howl espresso blend and it was mind altering, with a lemony brightness and an astonishing green flavor like tarragon. Last week the blend revealed itself as woodier, with an aroma like roasted almond shells, good in a different way, and less showy.

A single-origin drip (Ethiopian, though I’m not sure if it was Yirgacheffe or Guji Shakiso, constructed via the Japanese-made Hairo V60 pour-over system) appeared in a glass tumbler — it had grapefruit acidity, a kind of roasted barley richness, and nicely oily weight. It was good paired with the only pointedly savory pastry here, the grana chile scone, which tasted Parmesan nutty, under spiky heat.

A slab of frittata heavy with potatoes and chard has the same appeal as eating a couple of slices of cold pizza for breakfast. And, honestly, a couple of sweet scones and a wedge of dryish, streusel-top coffee cake were forgettable, though a slice of the double-lemon pound cake was good enough to justify starting the day with dessert.

So-called brunch specials — which engage the kitchen next door — start at 9:30 or 10. The day I tried to order, one of the two dishes (ratatouille baked in the pizza oven) was unavailable (something about some ingredients not showing up). Instead I got fried polenta: three hot, crisp-surfaced hunks glazed with honey. Sort of odd, served just like that, threatening to tumble off their small plate — something like cooked fruit would have turned the thing from a rough snack into an actual dish.

Then again, a certain on-the-fly quality is what, potentially, gives these laid-back breakfasts their charm — even if you’re not painfully hung over, cursing the fact that it’s another seven hours till you get off, desperately in need of impromptu comfort.