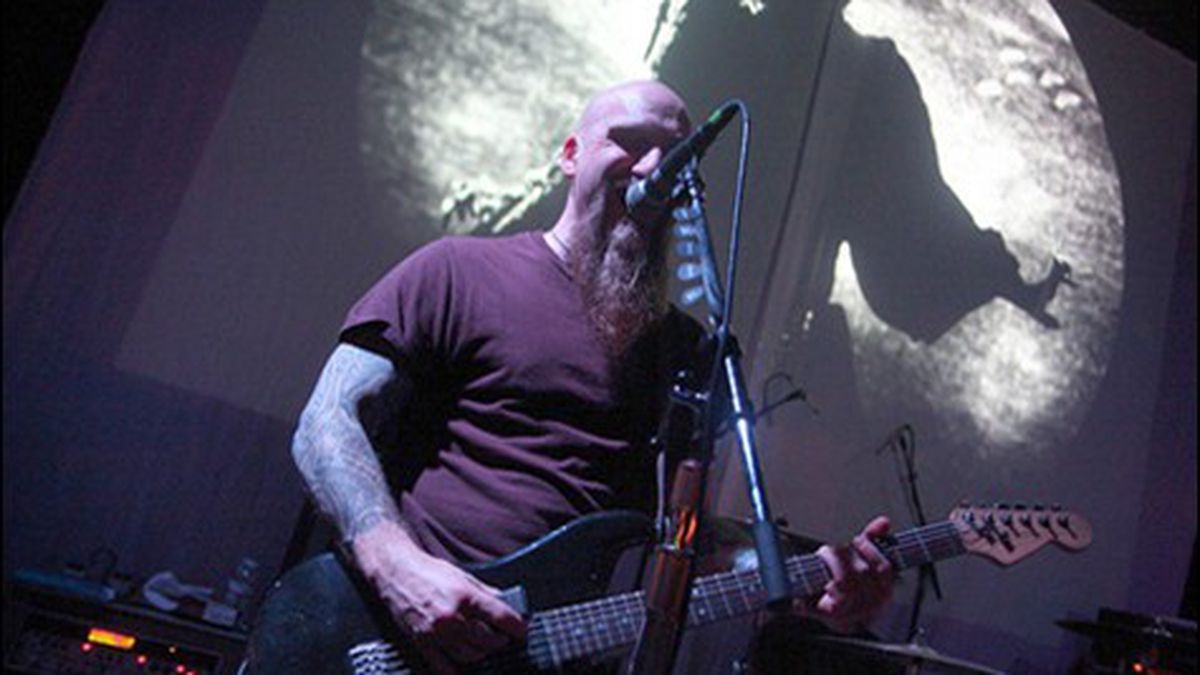 When Kenneth Thomas has an itch to do something, the threat of debt, sleep deprivation, or relationship implosion will not stop him. Case in point: Despite having stayed up until 5 a.m. and then spent an arduous day recording audio at The Wave Organ for his class at the San Francisco Art Institute, Thomas still managed to lumber his way toward the Mission District for an interview. His lanky frame teeters on gelatinous legs, occasionally bumping into whatever (reporter) might be nearby, his boom arm sticking out precariously from his backpack, causing a couple behind us in line at Bi-Rite Creamery to stare, wide-eyed, fearing death-by-puncture. (A semi-alert reporter prevented disaster.)

So when the 38-year-old lifelong metal fan had the sudden idea six years ago to make a documentary about three of his favorite independent record labels (Hydra Head Records, Neurot Recordings, and Constellation Records) and his favorite bands on their roster (Isis, Neurosis, and Godspeed You! Black Emperor, respectively), he didn’t waste any time. The day he came up with the idea, one of Hydra Head’s bands, Pelican, was playing a show in Los Angeles, where Thomas lived at the time. After the show Thomas approached the band’s drummer at his merch table. And, according to Thomas, the drummer responded, “Oh, Aaron Turner is here if you want an intro.”

Turner, of course, is the singer/guitarist of the band Isis, and the founder of Hydra Head, a label that has developed a reputation for putting out consistently solid releases from bands that have a similar aesthetic: Helms Alee, Torche, Cave In, Big Business, Jesu, and Oxbow, among them. In certain circles, Isis has been credited for inspiring a slew of followers. These bands aren’t metal, per se, but they’re heavy, not to mention thoughtful about what they do.

Thomas hadn’t expected to meet the head of a band and label he adored so soon, but suddenly, there Turner was in front of him. Thomas, being the passionate, loquacious guy he is, launched into a pitch he describes as more “emotional” than “fact” — explaining his love for Hydra Head, Neurot, and Constellation; their similar fan base; and why it’s important that someone — namely, him — do a documentary on all three.

He had been watching documentaries on punk rock at the time, ones that lamented the supposed death of the DIY scene. Thomas didn’t see it that way at all. He saw labels that were releasing amazing bands; viewing the music as art and putting equal amounts of energy into album packaging; doing it not for profit; and doing it for a very long time with little to no recognition. Relentless passion was something to which Thomas could relate.

“I really believe that these bands are just as important to musical evolution as the bands that are talked about in these punk rock documentaries, like The Ramones, The Sex Pistols, and Black Flag,” Thomas said.

Thirty seconds into his pitch, Turner stopped him, and told him to send him an e-mail. Thomas thought he’d just blown his chance. But in typical fashion, he didn’t waste time. “What do they say, when you go on a date with somebody you’re not supposed to call them the next day. I don’t believe that shit. If you have an idea or want to talk to someone, just do it.” So he fired off a more cohesive pitch the next day, and within 24 hours, Turner responded, agreeing to the project. Thomas was stoked.

Granted, it helped that he had some credits under his belt. Thomas, who grew up in Arcata, went to film school at Boston University and worked in TV news. He helped start a dot-com with King Crimson guitarist Robert Fripp in Seattle called Bootleg TV, filming rock concerts and putting them on the web. He filmed bands such as The Black Heart Procession, Queens of the Stone Age, The The, and The Legendary Pink Dots. He also produced a live DVD for The Chameleons UK. As a freelance videographer in Los Angeles, Thomas shot bands live and then offered them the footage for free. He promised Isis and the other bands he’d shoot in his documentary the same thing — a stipulation that likely cinched the deal.

His first test would be filming an Isis show in Los Angeles about a month later. That meant missing a girlfriend’s birthday (and resulted in the girlfriend later breaking up with him, but he has no regrets). Thomas recruited two buddies, borrowed camera equipment from the production company he was working for, and headed to the club. When he got there, club management told him only two cameras would be allowed in. They snuck the third in anyway. After the show, Thomas stayed up late and edited together two songs. The next morning he sent the footage to Turner, who liked what he saw.

Once Turner signed on, Thomas said it was much easier to get Neurot Recordings, originally based in San Francisco but now located in Coeur d’Alene, Idaho, and Montreal’s Constellation Records on board. Neurot was founded by Neurosis, a legendary Oakland band that spawned numerous other projects, and has been enormously influential in creating and inspiring a certain heavy aesthetic (Isis included). Constellation is known for putting out releases by Godspeed You! Black Emperor and other notable experimental bands.

Over the next five years, Thomas would spend hours with his subjects, drinking beer with Neurosis’ Steve von Till while watching an Iron Maiden documentary, purposefully irritating Isis’ Aaron Turner with a question he knew he’d hate in order to get a passionate answer. He’d shoot footage of and interview bands like Old Man Gloom, Jesu, Thee Silver Mt. Zion Memorial Orchestra, and Cave In. He went from enthusiastic fan to legitimate insider.

The result is the ninety-minute documentary Blood, Sweat + Vinyl. The film is divided into three sections — one on each label, recounting their history but mainly focusing on their philosophy. It also includes commentary from music journalists, artists, and record store owners. There’s a strong Bay Area element, too, drawn from interviews with Aquarius Records co-owners Andee and Allan, a recounting of Neurosis’ beginnings at an Emeryville warehouse, and an interview with local band Oxbow.

In many ways, the documentary serves as a kind of historical artifact — especially since Isis has since broken up. There’s plenty of concert footage that fans will certainly covet. Contrary to the style of a lot of music videos, the editing isn’t quick and choppy. The focus is clearly on the bands and the music. If you hadn’t heard of some of them before, there’s a high probability you’ll want to Google them after.

It’s the music, after all, that Thomas is most passionate about. His interest began when he was in first grade and his parents let him listen to AC/DC. Eventually he got into Metallica, Slayer, and Megadeth, and later Neurosis, Isis, Godspeed, and others. Many of them he discovered through Aquarius Records and their recommendation lists.

Thomas tried to become a musician himself over the years, but says it never really worked out. For him, the next best thing was to film bands. “This is a good way to contribute something back to these bands and these scenes and these movements that have inspired me,” he reasoned.

Thomas financed Blood, Sweat + Vinyl on credit cards, which is one reason it took him almost six years to finish. He had no real deadline, but earlier this year, he suddenly decided he was going to finish it once and for all. He spent months sleeping as little as two hours a night, having his girlfriend wake him up at 2 a.m. for him to work till 6 a.m., until he edited down about eighty hours of footage.

In true DIY spirit, he is distributing the film himself and is now taking it on tour. Just like a real band.