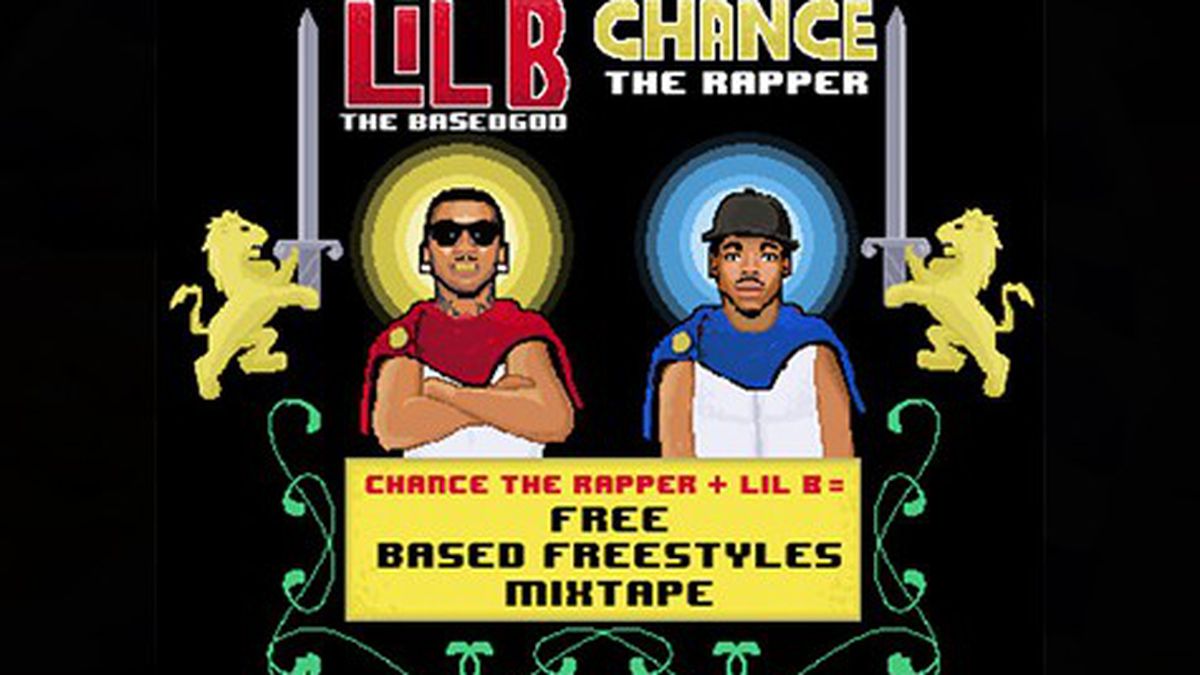 Blissed & Blessed in a Based Freestyle

Free (The Based Freestyle Mixtape) is local rapper Lil B's finest piece of content since "No Black Person Is Ugly."

We’re making an entire piece of content from scratch. That’s Chance the Rapper, opening up “What’s Next” with a statement of intent about Free (The Based Freestyle Mixtape), a six-song collaboration of the Chicago MC and the East Bay’s Lil B. The choice of the word “content” should register oddly, as it’s a hallmark of digital media corporations’ mercenary vernacular, the chosen term of clickbait apparatchiks for whom monetization potential trumps all. It’s also sort of accurate, insofar as rappers mind their consumers’ desires and create accordingly. That’s what the title of “What’s Next” refers to: fans asking for more. Chance is freestyling, which is reason to weigh his word choice more or less, depending on whether spontaneity engenders truth or babble, but “content” is an especially interesting term for his partner and spiritual guide on Free, Lil B.

The BasedGod, long known as bafflingly prolific, is experiencing mixtape downtick. Free is his first in 2015. Last year, he issued a modest three. Attribute it in part to a fire that reportedly took its toll on Lil B’s hard-drive, or to his speaking engagements on the college lecture circuit, but perhaps it’s a consequence of the rapper’s diversifying take on content creation.

Free arrives between two of Lil B’s finest news pegs. During the NBA playoffs, he cast a hex against a certain shooting guard who hijacked the rapper’s cooking dance as his own — which remains one of the single most inventive strokes of rap retribution, since it was symbolic payback against not only James Harden of the Houston Rockets, but also the many MCs who’ve presented B’s moves as their own — and his endorsement of Bernie Sanders over Hilary Clinton for US president and the subsequent CNN interview. The initial shift in allegiance apparently followed the Vermont socialist’s decision to follow Lil B on Twitter. Public persona is a project for every rapper, but Lil B appears to be diverting a lot of the energy he once funneled into mixtapes toward garnering attention by other means.

That’s a launching point for a big conversation about celebrity, relevance, and attention in the digital age, but does it mean a downgrade for the experience of being a Lil B fan? On one hand, the consensus remains that his mixtapes were wildly inconsistent things, very rarely rewarding as front-to-back listens. Meanwhile, his foray into punditry on CNN was amusing but ultimately conveyed little more than a viral infographic. Free is a better piece of content.

Free is a beaming, golden mixtape, brimming with a palpable sense of play, from beginning to end. That it’s cohesive — with congruous production across six songs, some of which go on for ten minutes without feeling like it — is exceptional for Lil B. His last bit of great work was the stirring “No Black Person Is Ugly,” but Ultimate Bitch, the mixtape it arrived on, doesn’t warrant revisiting overall. Nate Fox, Chance’s bandmate in the Social Experiment who’s also responsible for much of the production on Acid Rap, contributes the best beats here, but in every song besides perhaps “Amen,” the music feels like scaffolding for a couple freewheeling MCs. They default to commending one another, aggrandizing the fact that they’re in a room, and at one point implore the engineer to keep a beat going beyond the song’s logical conclusion.

Chance’s freestyles riff on themes, making concrete associations that teeter into figurative flights of fancy. His first verse, on the opener, “Last Dance,” rhymes “hocus-pocus” and “halitosis,” the latter invoked to emphasize the potency of rapping. He’s similarly inventive throughout, opting for singsong and staccato cadences in the space of single verses. Not that Chance’s virtuosic exterior doesn’t crack, as it does on “What’s Next,” in which he falters and recovers with a laugh, Yeah, I’m goin’ back to rhymin’ with “Jordan”/’cus that shit’s important! Lil B, meanwhile, is about as based as he’s ever been, languorous and fumble-prone, but forging unlikely connections in the murk of his signature dream logic.

On “First Mixtape,” they trade bars about humble beginnings atop a flute sample. (It also contains the only misstep, when Lil B grasps for the once fashionable phrase no homo to complete a rhyme, which also appeared in a recent transphobic tweet that he immediately backpedaled. Let’s leave that dated bit of homophobia on Dipset records.) On “Do My Dance,” Chance opens with the sort of ingratiating appeal to fans that B specializes in: Shout out you/Shout out you. Later in the track, he introduces B with a bit that would in any other circumstance sound like bootlicking: Most loving/Most caring/Most eclectic/Most intellectual artist/Lil B!

That’s typical of the positively radiant environs in which Lil B sounds most at home. On “Amen,” a nine-minute centerpiece produced by Fox, the rappers bob in a blissed, buoyant pool of pump organ, snaps, and keys. It’s down-tempo, sparse, and Chance and Lil B settle into an understated singsong, adding notes of hummed scat beneath one another’s flow. At one point, Lil B starts to stutter, and out of the disrupted freestyle rises mortal concerns. But what if I die today?/Would they remember me?/Would I be history?/ Would I be everything? It feels as if the façade is peeling away, an artist whose career has so few comparable precedents realizing how precarious and uncertain it is to be a pioneer. That’s content.